Smartron is an Indian consumer tech company that makes products such as phones, hybrid laptops, and wearables. The Smartron t.band is a fitness tracker that can monitor your blood pressure monitoring as well as take ECG (electrocardiogram) readings. It has an exercise mode and can track sleep as well. Since the device is IP67 water- and dust-resistant, you don't need to worry about it getting wet, although swimming with the wearable is not recommended. The Smartron t.band promises a lot of features at Rs. 4,999 and we put it through a bunch of tests to see if it delivers.

The Smartron t.band has a plastic capsule with metal sides and a metal touch button below its display. At the base of the capsule, one can find contacts for charging and the heart rate sensor. The silicone strap that ships with the t.band is comfortable to wear for long hours. It's easy to live with, and we didn't face any fit issues during the review period.

The interface of the t.band relies heavily on the metal button. You tap it once to activate the display, which is off by default. Each subsequent tap cycles you through various modes such as exercise, heart rate, blood pressure, etc. While this seems simple enough, we weren't happy with this button at all. On many occasions, we had to tap the button multiple times to wake the band. It needs to be pressed firmly, so if you try to do it in a hurry, it's not going to work as expected all the time. Smartron sent us two review units of the t.band and we had this issue with both of them. On the other hand, the display was bright and readable even under bright light, which is a plus. 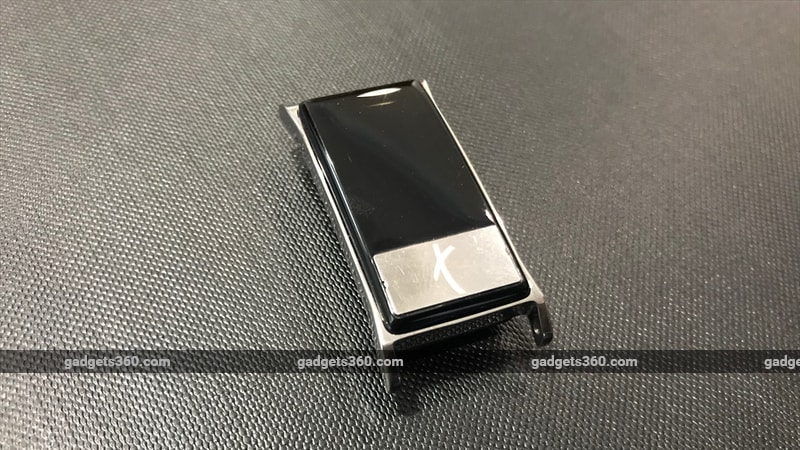 The Smartron t.band's interface relies on the metal button, where the logo is placed in this picture. This didn't work reliably in our tests.

You need to tap and hold the button to activate or deactivate a workout via the device's exercise mode or begin taking ECG and blood pressure measurements when in those respective modes. Again, this wasn't entirely reliable. Once, during a gym session, we wore the band with the display under the palm of our right hand. After one set of goblet squats, we touched our shoulders with our hands for a few seconds, only to see that the t.band had ended the workout. Enabling it again took four attempts, because as we discovered, the t.band's metal button doesn't work very well if your fingers are sweaty.

We asked Smartron about this and it said that it was aware of the issue. The company told us that quite a few people have low “biopotential”, and that the t.band isn't very good at measuring blood pressure for them. Sadly, none of the materials supplied with the product or the app mention any such limitation. More importantly, there was no such indication on the company's website or on the Flipkart listing to warn buyers of the potential problems they might face. 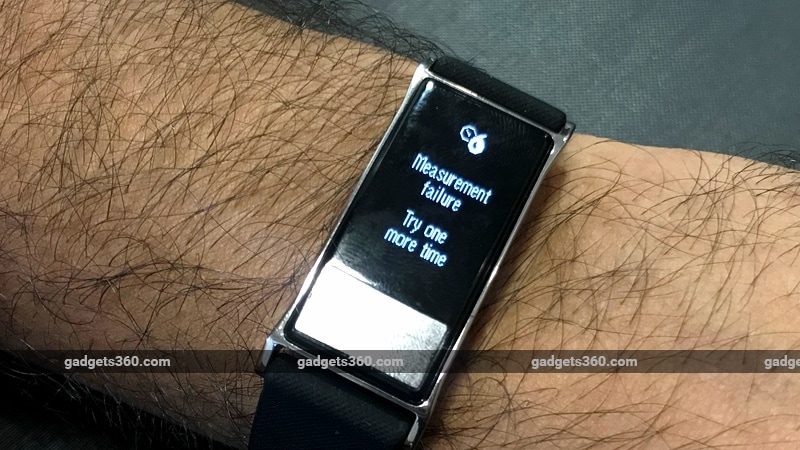 When we did get blood pressure readings from the Smartron t.band, we noticed that they were reasonably accurate for some people, but not for others. For one person, the Omron BP monitor reported 118 over 73, while the t.band showed 124 over 77. For this reviewer, the Omron BP monitor's readings were 94 over 61, while the t.band's readings were 114 over 70. This fails to inspire any confidence in the t.band's ability to measure blood pressure accurately.

We also took a few ECG readings with the t.band, but the process is cumbersome. You have to get into ECG mode and then press the metal button for two minutes. It did work much better than the blood pressure monitor, even though we weren't able to compare measurements against a professional-grade ECG machine. We must mention that holding the button for two minutes requires a lot of patience and the t.band gave us a ‘Measurement Failed' error once every four attempts or so. You're never really sure if it's your fault, or whether the t.band is doing something wrong, which is frustrating. That's why we wouldn't recommend using this product as your primary ECG device.

The Smartron t.band was also subject to our standard step-tracking test, in which we walked 1,000 steps while counting them manually. At the end of 1,000 steps, the t.band showed that we'd walked exactly 1,000 steps. That's as good as it gets in terms of accuracy. We then took the t.band on a 10km run with exercise mode enabled. The t.band said we'd run around 9km, which was a disappointing result. This can be excused a bit because the t.band doesn't have GPS for accurate distance tracking, which means any distance it measures is meant to be an estimate. 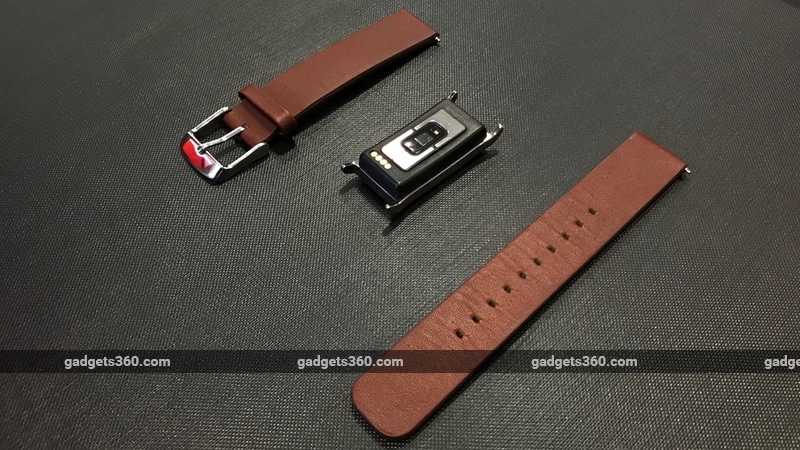 We also used the t.band for workouts and found its exercise tracking to be decent. Its heart rate measurements were quite close to the readings shown on our Apple Watch Series 2, except that it seemed to react a bit late to changes in heart rate. Our heart rate went from 135 to 169 on our Apple Watch after a set of push-ups. The t.band showed it as 125 when we tapped the display, but then it rose quickly to 165. When we looked at the heart rate chart on the thealth app, it looked quite similar to the data recorded by the Apple Watch, but it was apparent that the peaks and troughs were slightly mismatched on the t.band. We noticed that the t.band takes a few seconds more to measure changes in heart rate, which led to the mismatched graphs.

The t.band has a nice raise-to-wake feature that lets you avoid pressing the metal button to check the time or see the latest notifications. You can see truncated notifications, though you can't configure what you see or do anything to respond to them. We would have liked a mode that stops it from buzzing when we aren't wearing it. When placed on a table, the vibrations can become annoying. There is a do-not-disturb mode in the app, but it's cumbersome to enable it manually if you take off the t.band for a short while. Thankfully, you can schedule do-not-disturb so the t.band doesn't buzz at night. All of this is fairly standard for fitness bands.

The battery of the t.band usually lasted us for 2-3 days with two workouts per day and notifications enabled. This is acceptable, but far from ideal. Unfortunately the t.band uses a proprietary charger, which is a malaise of the entire fitness wearables industry. Last but not the least, the thealth app is quite nicely designed and shows data in neat charts that are easy to read. However, as things stand, the slick app is not enough to make up for the glaring issues with the Smartron t.band itself. 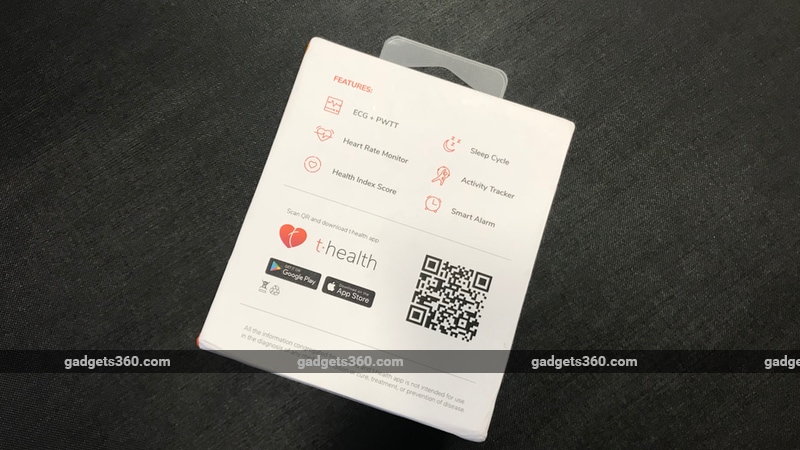 The Smartron t.band promises a lot of features at a reasonable price of Rs. 4,999. However, its performance doesn't justify the cost at all. The blood pressure monitoring feature is broken, the metal button didn't work reliably enough, and the ECG measurement process is too cumbersome for most people to use. It has an accurate step tracker, a slick app, and a nice exercise tracking mode. You could easily buy a Xiaomi Mi Band 3 for step tracking and notifications (Rs. 1,999) and a blood pressure monitor (Rs. 1,500), and just go visit a doctor for an ECG reading. The total cost of these will most likely be less than that of a Smartron t.band, with far more accurate results.

Further reading: Smartron, tband, Smartron tband price in India
Pranay Parab Email Pranay Pranay is in charge of podcasts and videos at Gadgets 360. Over the years, he has written over 500 tutorials on iPhone, Android, Windows, and Mac. He has also written in-depth reported features on the intersection of technology and culture, reviewed fitness wearables, been the social media manager, started two podcasts, and produced several tech videos. He loves travelling, particularly to places not frequented by tourists. He keeps running half-marathons across the country and hopes to complete ...More
NASA's Hubble Completes First Science Operation After 3-Week Hiatus
Lenovo K9, Lenovo A5 to Go on Sale in India Exclusively via Flipkart From November 1