There are two types of people in the world - those who suffer, keenly, from backaches and general aches and pains, and those who look upon you in amazement when you want to take a break and sit down for five minutes because everything hurts. If you fall into the second category, don't worry, time may still catch up with you. For the first lot, there are a number of gadgets out there that offer to help - from hand-held massagers to chairs that cost lakhs.

The Sandpuppy Fitbelt is a heating and vibrating belt that can be worn about your waist (or even your thighs or upper back if you're willing to fiddle a little bit with getting the fit just right) to give a soothing sensation and temporary relief from the pain you're feeling. It won't replace rest or exercise, but in the week or so that we've been using it, the belt actually proved to be fairly helpful.

But at Rs. 7,499, it's also one of the most expensive massage belts we've come across. There are plenty of other options from different brands that sell for between Rs. 1,500 and Rs. 3,000, though their MRPs are higher. The key difference is that that Fitbelt is a "smart" device, that connects to your phone via Bluetooth, and is controlled via an app. Does that make enough of a difference to justify the higher costs? Read on to know more. 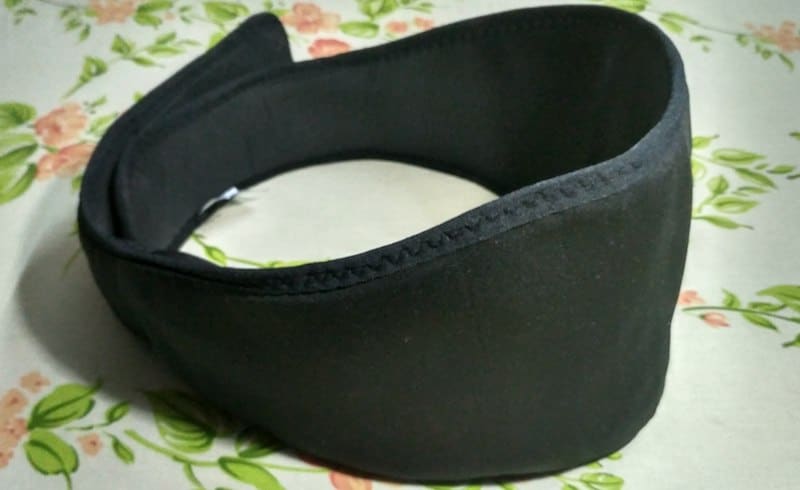 Getting started
The Fitbelt's box includes the belt itself, a convenient carrying pouch, and the charger, along with a user guide. The device itself is pretty straightforward - there's a strip of velcro along the ends to allow you to clasp the ends together. The belt comfortably fits up to 40 inches waist size, but if you write to the company when placing your order, it will ship a special extender as well, which is simply an additional velcro strap that's extremely easy to attach. Just place the belt around your waist and bring the ends together in front of you, and you're good to go.

To use it, you're going to have to charge it first - it has a 7.4V Li-ion battery so it comes with its own charger. You can't use a Micro-USB charger to power this belt up, so if you run out of battery, you'll need to have to have the charger at hand.

The battery, which is covered in the one-year warranty, takes about two hours to charge fully. There's a flap on the belt under which the charging cable attaches, and the belt can not be used while charging.

After it's been charged, you'll be able to use it for approximately one hour non-stop. The exact time will depend on the level of heat and vibration you set the massager to, so you might get a little extra time out of your belt.

There's an on/ off toggle on the belt which is hidden under the Sandpuppy logo. You need to press this to get started, and it's actually one of our least favourite parts of the experience. The button is hard to spot, and a lot harder to actually press. You have to hold it for a second, and there's no clear feedback, no button springing into place, so you're not sure if you're holding it properly, or if the battery is down, or if you're pressing down on the wrong spot.

Once that's done, you can control the belt through the app that's installed on your phone, and the rest of the experience is pretty hassle free.

Is your belt smarter than you?
On your phone (the free app is available for both Android and iOS) you'll connect to the Fitbelt via Bluetooth. The app - called Sandpuppy - does the pairing fairly easily, detecting belts in your vicinity and connecting to them with a simple one-tap process.

The settings for the belt are controlled through the app, and you can change these very simply. There are two large icons on the screen, showing the temperature and the vibration levels; below that there's a smaller icon showing the battery level.

In the settings, you can update your info, and select a vibration pattern - between normal, sine, triangle, and square. These are different automatic presets that pulse in and out to deliver a relaxing experience. Or just set it to normal and crank it all the way up if that's what you prefer.

Beyond that, there's not much else to do in the app. It's worth pointing out that the belt remembers the last setting; so once you've found your favourite levels, you don't really need the app. You can turn the Fitbelt on and off using just the button on the belt, and it will continue to operate at the level it was last left on. 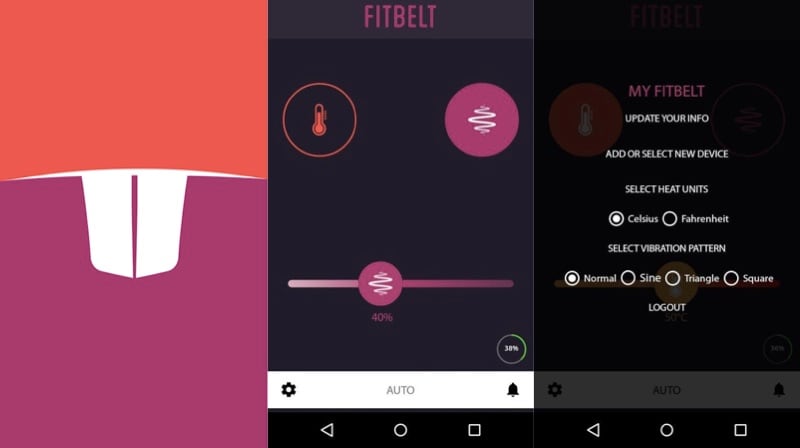 Moving the adjustment functions to the app means that the Fitbelt looks sleek, without extraneous buttons and knobs, and the battery display is also really helpful, but by itself doesn't really feel absolutely necessary. On the other hand, it also means that different family members can easily use the same belt, adjust the settings quickly and easily to their favourites, which can be a plus. It would also make it easier to change the settings if someone who is not very technologically savvy is operating the belt, as the app itself is very intuitive, and you can even adjust settings for other users without having to poke at buttons on the belt while they're wearing it.

Good vibrations
In terms of actual usage, the belt is actually really nice. The design is appealing, and it feels comfortable. You can wear it around the house while you're doing your usual routine, and turn it on or off whenever you want to. It's slim enough to go under your shirt so you can even wear it and go out for a meeting.

The heating can get a little intense, so find the level that's comfortable for you - some people are more sensitive to heat and don't like it while others will crank it up - while the massage function is a little light. At the maximum level, if feels like a gentle hand massage, though the different presets are actually a more pleasant setting - our favourite was Triangle.

We've tried out a number of similar products, both ones that need you to stay in one place, and portable massagers like this one. Overall, the Fitbelt measures up fine. The pain relief you feel is very temporary, but if you're stuck hunched over your laptop all day long, then it can be pleasant to have this on for a while and feel a little looser. It's an oscillator only - there's no electric stimulation - so it should be safe to use, and typically after 15-20 minutes, we would turn it off, and then switch it on again later. In this way, a two-hour recharge could easily see us through the whole day. 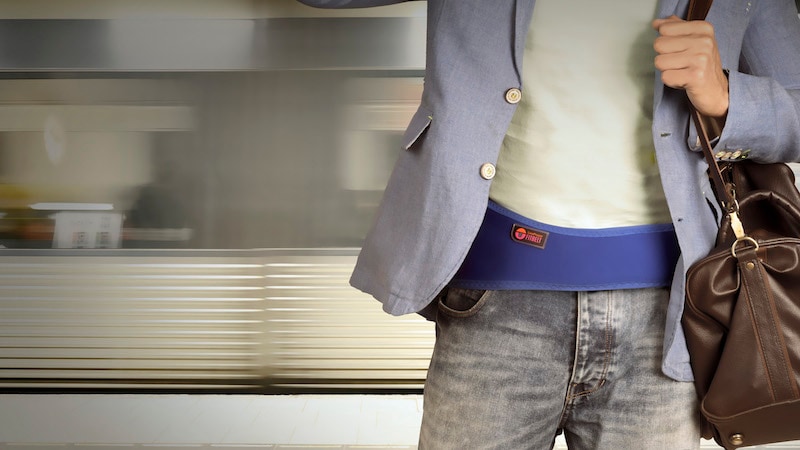 Working in the kitchen with the Fitbelt on, it wasn't a distraction and didn't get in the way of what we were doing, and we even wore it while going on a taxi journey in Bengaluru's endless traffic. Nothing can really help you to deal with the city's traffic, but having a device like this at hand did help a little.

Final thoughts
The Sandpuppy Fitbelt is a first generation product and that shows. The app is still fairly limited in what you can use it for. There could be a number of innovative uses, such as proximity-based operation, or time-based usage that could be controlled via and app, and apart from the battery life, it could also track statistics and offer that information. Though maybe you don't really need to know how long your last massage lasted.

The point is that the app is pretty much ignored after the first day or so when you're fine tuning your preferences. After that, the belt is pretty much operated through the button on the device - which can be a good thing, or bad, depending upon how 'smart' you like your devices to be.

Apart from that, the price is also a little higher than we're entirely comfortable with. Additional features and a smarter app might help change that, as would small tweaks such as addressing the hard to use button. If these don't sound like big issues to you though, then the belt is available now via Amazon.

Further reading: Sandpuppy, Fitbelt, Massager, back pain, Backaches, Health, Wellness, wellness belt
Gopal Sathe Email Gopal Gopal Sathe is the editor of Gadgets 360. He also writes about gadgets, games, technology and society. Send him pitches for freelance stories, and give him feedback about how we&amprsquore doing! More
Chrome 58 Now Available, Doesn't Bring Anticipated Touch Bar Support
Firefox 53 Released for PCs and Android; Introduces 'Quantum Compositor' for Fewer Crashes
product The Sandpuppy Fitbelt is a smart massage belt you can take wherever you go, controlled via an app on your smartphone.