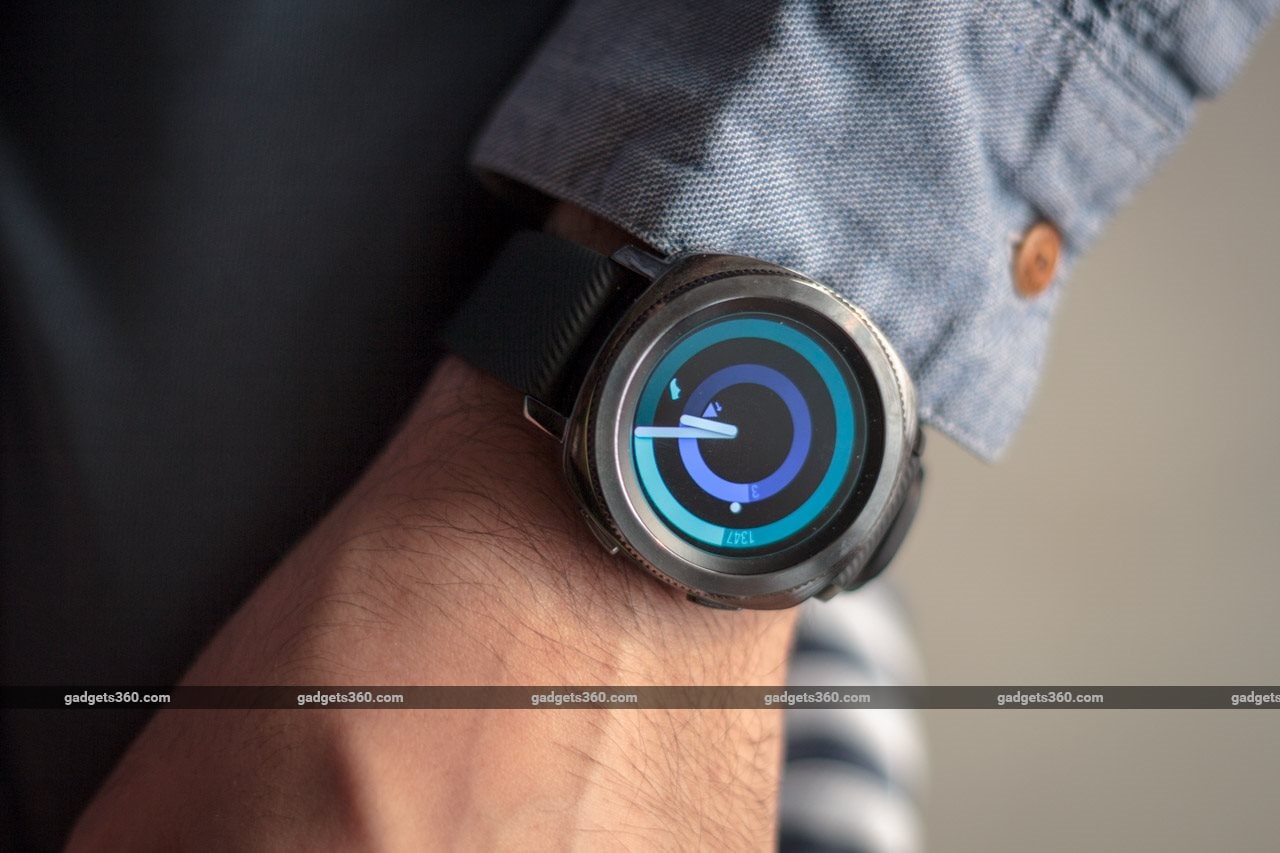 The announcement of the Samsung Gear Sport a few months ago came as a bit of a surprise, because it wasn't exactly the idea of an upgrade for the Gear S3 smartwatch that most people had in their minds. Instead of a full next step à la a Gear S4 – which is now expected alongside the Galaxy S9 launch – Samsung gave us a half step, in the form of the Gear Sport.

This new wearable has a smaller footprint than the Gear S3, whose bulkiness was a major complaint. It’s 4.5mm shorter, 3mm narrower, 1.3mm thinner and 12g lighter (without the strap). Millimetres and grams might not seem like much when talking about most products, but every little bit makes a difference for a thing that you put on your wrist.

The reduction in bulk has been achieved by making the screen 0.1 inch smaller and taking out two Gear S3 features: the LTE option, and Samsung's MFT technology for Samsung Pay, which emulates the magnetic stripe on your credit and debit cards. The Gear Sport does still have NFC that can be used for Samsung Pay, though PoS that support NFC aren't as ubiquitous in India as some other regions. Also, despite launching after the Galaxy S8, this new Samsung wearable offers Samsung’s older S Voice feature rather than the new Bixby AI assistant.

The circular display on the Gear Sport makes it look like a traditional watch, so it won't be out of place even at formal events. You might want to separately purchase a metal strap though, as Samsung ships the wearable with a rubber one. A metal strap would mean extra weight, but the rubber strap is in any case so light that the Gear Sport is top-heavy, causing it to roll around on a wrist. Also, if you're upgrading from a fitness tracker to a smartwatch for the first time, you'll definitely find the Gear Sport heavy, especially when you take it off.

Navigating the UI is fairly intuitive thanks to the rotating bezel that Samsung came up with, which is easier to use than the crown on most other smartwatches, including Apple Watch. The 1.2-inch Super AMOLED screen has a pixel density of 424ppi and is equipped with Gorilla Glass 3, which mean that it looks great and is protected from scratches.

You can enable a setting that automatically triggers an action if you hover the bezel cursor over it. That's a good idea, as it can be a bit tough to select items on such a small screen. Unfortunately, it works only in the main menu and nowhere else. Hopefully, Samsung will expand this functionality to all parts of the UI.

There are two buttons for further interaction with the Gear Sport's UI: Back and Home. You can wake up the device by pressing either button or by tilting your wrist so that the watch faces you. There is an option to set the watch face to always be on at a lower brightness, giving you an easy way to glance at the time and your activity stats.

The biggest problem is that there just aren't enough worthwhile apps, owing to Samsung sticking with its own Tizen OS. Both Apple's watchOS and Google's Android Wear platforms are more popular with developers, owing to their dominance in the smartphone market.

The connection between the Gear Sport and an iPhone 6 was more stable than what we saw with the Gear Fit 2 Pro. Flipping through the UI seems to be snappier as well, and new apps are installed quickly.

The process of installing apps is still annoying though, with multiple dialog boxes that need to be tapped each time, asking whether you want to download directly to the device (the Gear Sport has Wi-Fi), informing you that downloads over 1MB can result in high mobile data charges (even if your phone is connected to Wi-Fi), and then a permissions screen.

The store is also region-locked, which means apps such as Spotify aren't available for Gear Sport owners in India, unless you're willing to remove the phone's SIM card and then connect to a VPN.

Samsung Gear Sport activity monitoring and GPS
Like previous Gear products, the Gear Sport is capable of tracking more than a dozen activities. Those include running, walking, cycling, hiking, swimming, lunges, crunches, squats, star jumps, pilates, and yoga. It also has modes for using a treadmill, exercise bike, rowing machine, or elliptical trainer. The one big addition is swimming, made possible thanks to full waterproofing on the Gear Sport as opposed to just splash-proofing on the older Gear S3. Activities can be tracked automatically and you can also allow the Gear Sport to automatically pull your location if it detects that you're exercising.

We didn't face any problems getting a GPS lock with the Gear Sport on an iPhone (unlike our experience with the Gear Fit 2). It regularly found a location fix within 10-15 seconds, though it's very quick to turn GPS off if you don't press 'Start Workout' in order to save battery power.

Samsung Gear Sport music, notifications, and S Voice
The Gear Sport lets you pair Bluetooth headphones with it directly, and you can store music on it, allowing you to leave your phone behind during workouts. There's a caveat to though: out of the claimed 4GB, 2.5GB is already occupied, so you have just 1.5GB for your own files.

While the Samsung Gear Sport supports all manner of notifications on both Android and iOS, you'll get much more extensive support with a Samsung phone, including the ability to send canned replies to messages. Other Android devices can only send replies to incoming phone calls.

The Gear Sport has a microphone, and Samsung's older digital voice assistant, called S Voice. It's meant to help you take care of small tasks such as opening apps, creating reminders, checking the weather, and getting in touch with your friends. However, we had poor results when we asked it to work with Indian names in an Indian accent. Every time we did, S Voice asked us to repeat ourselves and kept failing until giving up entirely: “An error has occurred. I’m unable to answer your question. Try again later.” This is in addition to other regular failures, which can be so infuriating that it's better just to navigate the UI on your own.

To test the accuracy of the Gear Sport at measuring distance, we used mile markers on a running track as a reference. Surprisingly, it performed worse than the more affordable Gear Fit 2 Pro. With GPS on, it had an average error rate of over 14 percent. With GPS disabled, that went up further to 22 percent. (Runkeeper, using an iPhone's built-in GPS functionality, showed an average error rate of less than 5 percent.) It's not clear whether the Gear Sport deliberately underestimates its distance recordings, since the watch's step counts were always under the real figure as well. By manually calculating the steps we took, we found the Gear Sport always measured 92-96 for every 100 we took.

We also had an unusual problem with our Gear Sport unit during the review period, when it just stopped detecting movement at all. That meant it failed during workouts, and also wouldn't give us nudges when we were sitting around for too long. Thankfully a reboot solved the issue, but it shouldn’t have happened at all.

In terms of battery life, the Gear Sport lasted one and a half days on average. That's expected from a premium smartwatch with a Super AMOLED screen. Its 300mAh battery takes nearly two hours to charge, though. The included charger puts out only 0.75A, but using a more powerful third-party charger didn’t affect charging speed at all.

Verdict
The Samsung Gear Sport is smaller and more comfortable on the wrist than the Gear S3, but its size and weight are still noticeable if you're used to simple fitness trackers such as the Fitbit Alta or Charge 2. Of course you get lot more features – a Super AMOLED display, the cool rotating bezel, built-in GPS, and waterproofing – but you can get most of that with the Gear Fit 2 Pro as well, at nearly half the price.

If you've always wanted a wearable that looks like a traditional watch, the Gear Sport is a fantastic choice – more so if you use a Samsung Galaxy smartphone. But with the company expected to launch an all-new Gear S4 alongside the Galaxy S9 not long from now, you should wait and see what new features and capabilities it delivers.

Samsung's choice to go with its own Tizen OS means that the Gear Sport is severely lacking in useful third-party apps. But with Google's wearables platform not going anywhere either, it's understandable why Samsung has ditched Android Wear. There are also significant advantages – the rotating bezel works so well because Tizen is designed around it.

For those with an iPhone, an Apple Watch will offer much better connectivity. The Series 3 is more expensive than the Gear Sport, but the Series 2 comes close to Samsung's price tag of Rs. 22,990.