Every January, we make new years' resolutions every year and try to stick to them till the next year. Given how 2020 was, I'm sure a lot of us are taking our health more seriously and wish to be a bit more active in 2021, so it seems to be just the right time for OnePlus to launch its first fitness band, conveniently called the OnePlus Band. One thing about it that caught my attention immediately is the presence of SpO2 tracking. This is a helpful health metric to track, especially with the current global situation. The OnePlus Band is priced at Rs. 2,499, which pits it against the Xiaomi Mi Band 5. So can the OnePlus Band help you with your resolutions? I put it to the test to find out.

This is the first fitness band from OnePlus, and it looks like the company has taken some help from its friends over at sister brand Oppo. The OnePlus Band looks identical to the Oppo Band which was launched in China back in June 2020. The Oppo Band hasn't gone on sale in India, so the similarity might not be recognised by many people.

The OnePlus Band, like most fitness bands, has two components: a strap and a capsule. There are no buttons on the capsule but it has a touchscreen just like the Mi Smart Band 5 (Review), with a OnePlus logo below it. Powering up the OnePlus Band requires you to clip the capsule onto the included charger.

You can easily pop the capsule into and out of the strap. The combined weight of the two is about 23g, which is light enough to not bother you if worn all the time. The strap design is similar to what we have seen on the Mi Band series so far and I can say that it is unlikely to come off your hand without you noticing it. 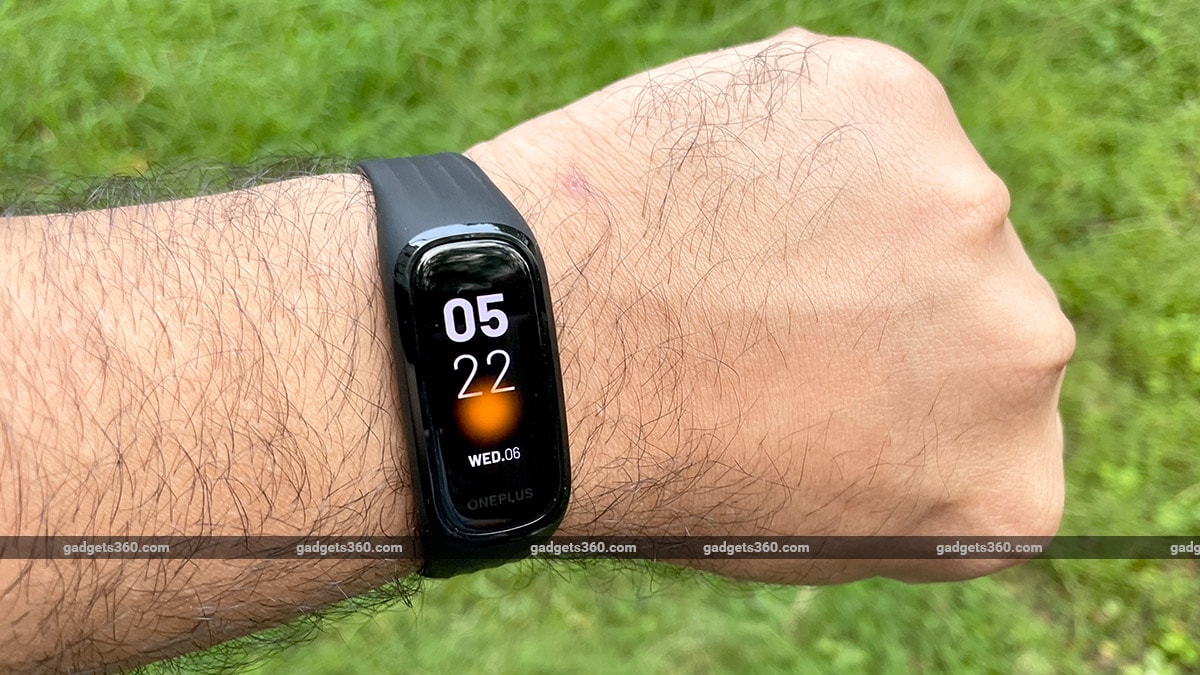 The OnePlus Band has a 1.1-inch AMOLED display

OnePlus has made a few changes compared to the Oppo Band. The OnePlus Band comes with a Black band but you do have Navy, and Tangerine Gray strap accessories to choose from with the latter being the flashiest. I liked the stealthy look of the Black band I had. The strap material isn't harsh on the skin and I did not face any discomfort during a week of use.

On the underside of the capsule are pins for charging, and sensors for heart-rate and SpO2 tracking. The OnePlus Band does not come with a magnetic charger like the Mi Band 5, so you will have to remove the capsule from the band for charging, which could be inconvenient for some people.

The OnePlus Band has a 1.1-inch AMOLED display with a resolution of 126 x 294 pixels. You have the option to set screen brightness at five different levels. There's a toggle in the app to lower the screen brightness at night. There is support for Bluetooth 5, and this device runs on a 100mAh battery, which OnePlus claims is enough for 14 days of battery life. The OnePlus Band is IP68 certified for dust and water resistance and can handle up to 5ATM of pressure, so you can wear it while swimming.

You can pair the OnePlus Band with Android devices running Android 6 and above. OnePlus did not have an app for iOS when I started testing the band, the company has mentioned launching one in the future. The OnePlus Health App is similar to Oppo's HeyTap Health app, which I used when I reviewed the Oppo Watch (Review). You will get detailed information about your steps, heart rate, SpO2 levels, and sleep with this app. 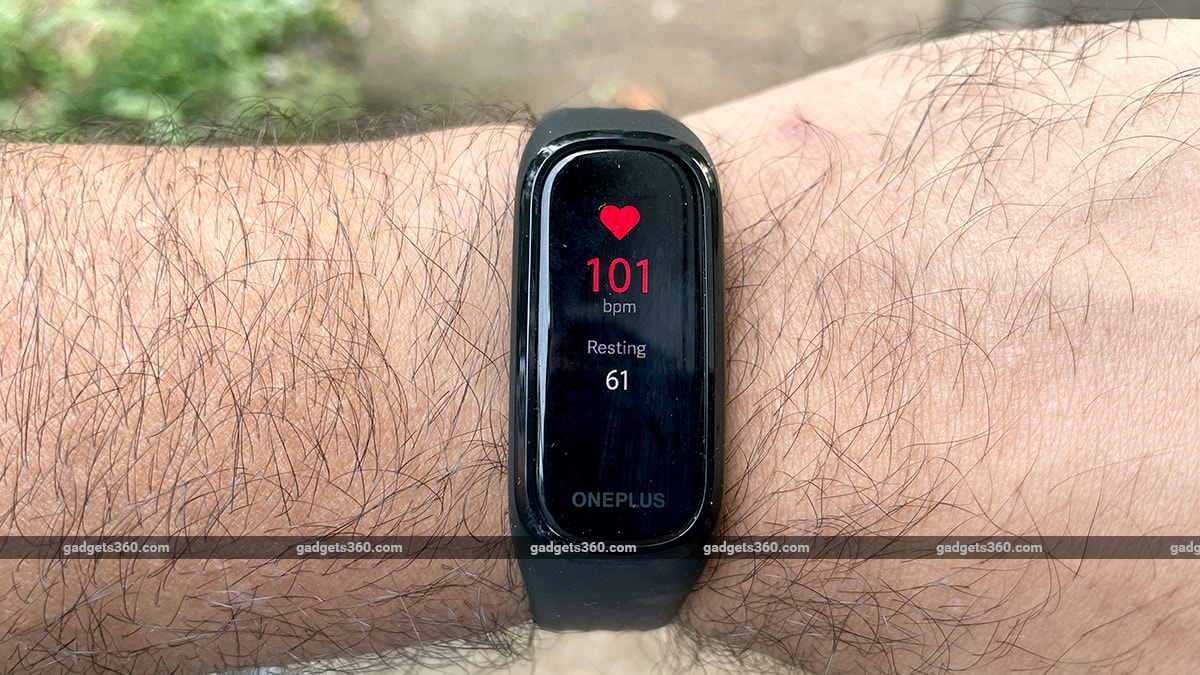 It is very easy to pair the band with the app. You can rearrange the menu on the OnePlus Band, but I didn't fiddle with this option. Certain settings such as the frequency of heart rate and SpO2 measurement can be configured only through the app. I could also decide which apps were allowed to notify me on the band. The app is easy to use and has a persistent notification on Android to prevent the system from shutting it down.

The OnePlus Band can store upto five watch faces at a time, which you can then choose by swiping on the homescreen. There are more that you can download through the OnePlus Health app.

On the band itself, you will be able to check your daily activity, heart rate, sleep duration, SpO2 level, and the weather. It also has a Breathe app for guided breathing exercises. Swiping left or right from the home screen changes the watch face, while swiping from bottom to top brings up the menu. You can also swipe from top to bottom, just how you would on a smartphone, to quickly access the notifications. The OnePlus Band works as a notifier to show notifications from your smartphone. You can read incoming messages, but it isn't convenient to read on the small display. It also buzzes to notify you of incoming calls, but I could only silence the band or reject incoming calls from the band.

I used the OnePlus Band regularly for a week to monitor how it performs. I found its interface very easy to use. The OnePlus Band offers multiple workout modes, most of which are commonly used, such as outdoor walking, cycling, running, cricket, badminton, and swimming.

The OnePlus Band is also capable of SpO2 tracking, a feature that isn't common in affordable fitness bands at the moment. I found the SpO2 tracking to be accurate, and I measured it at least once a day. The reading was usually 99-100 percent, which it should be for a healthy individual, and the readings were in line with what I got from the Samsung Galaxy S10 Plus' heart rate sensor. The OnePlus Band takes SpO2 readings only when you specify, and requires you to stay still. It is also capable of tracking SpO2 while you are asleep, either at intervals or in real time. However, OnePlus states that this will lead to rapid battery drain and results might not be accurate if you move. 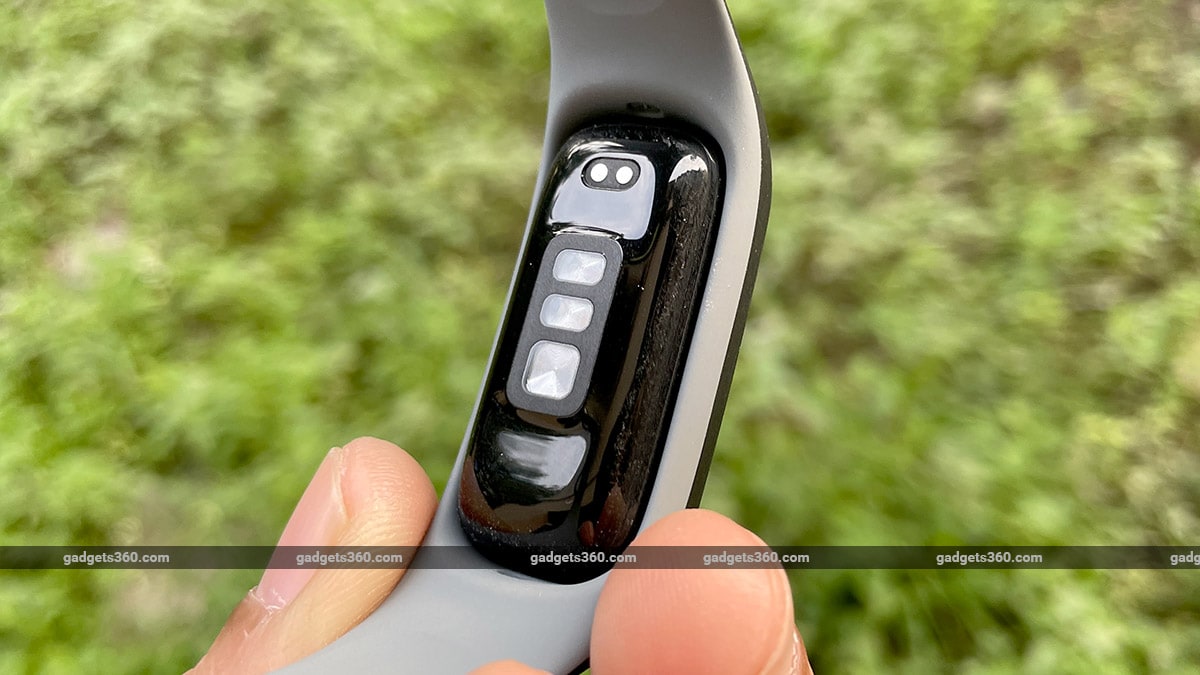 I found heart rate tracking to be in the same range as what was reported on the Apple Watch SE (Review) I tested this against. Continuous heart rate tracking is disabled by default, just like on a lot of other fitness products. I set this to continual tracking at two-minute intervals. You can also choose to set it to take readings at six-minute intervals or even every second, which is likely to drain the battery very quickly.

Step tracking was a bit off on the OnePlus Band. It measured only 910 steps for the 1,000 steps I counted manually. This is a big margin, so if you are looking to keep track of your activity levels, this device isn't as accurate as the Mi Band 5. I encountered the same issue when measuring distance as well. I took five laps of a 700m walking track, and the band measured 3.17km even though the distance covered was actually 3.5km. I did not face any issues with notifications, as the OnePlus Band buzzing on my wrist was effective enough.

Sleep tracking with the OnePlus Band was accurate, and it could also detect periods of wakefulness accurately during the night. Using the OnePlus Health app, I could see the breakup of sleep stages, marked as Light sleep, Deep sleep, and Awake 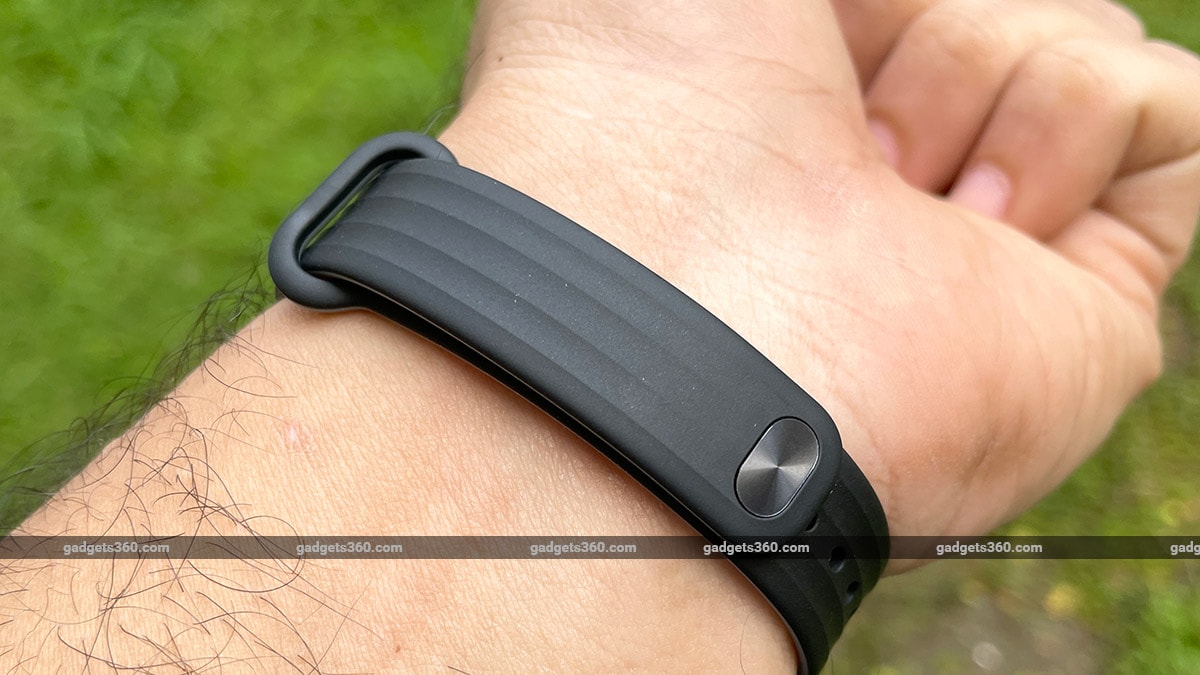 Battery life will vary vastly depending on how you set up the OnePlus Band. If you don't use SpO2 tracking regularly, reduce the frequency of heart rate tracking, and don't enable notifications for busy apps, you should be able to get 8-10 days of battery life per charge. I had set my screen brightness to 60 percent and had notifications enabled for WhatsApp and Slack, which kept the band buzzing throughout the day. After four days of usage, which included tracking my walks daily, the battery level was down to 40 percent. The band eventually lasted for a little over six full days with my usage before needing to be plugged in. It would have lasted longer if the heart-rate tracking interval had been set to six minutes rather than two.

Charging the OnePlus Band requires you to remove the capsule from the strap. This capsule sits snugly in the included proprietary charger with an audible click. Charging was quick; the band got from zero to 51 percent in 30 minutes and was charged completely in about an hour.

The OnePlus Band is among the few fitness bands in the market to offer SpO2 tracking. If you are looking for a wearable specifically to track this, the OnePlus Band does it quite well. I also found it to be good at sleep and heart rate tracking, but not so much when it comes to step and distance tracking. For those on iOS, you might have to wait a little longer. If you are looking for a fitness band primarily to track the number of steps you take and the distance you cover, the Mi Band 5 would be a better pick at roughly the same price.