Google's Wear OS, formerly known as Android Wear, isn't where the company intended it to be. Despite a headstart in the wearables game, there are now more fashion brands launching watches than tech companies. An interesting detail is that the watches from most of these fashion brands, including Diesel, Skagen and Misfit, are developed by the Fossil Group.

Another Fossil brand, Misfit, has now launched its first Wear OS smartwatch in India. Priced at Rs 14,495, the Misfit Vapor does initially seem like it offers better value for money than other Android wearables currently in the market. But does that translate into good real-world performance? We find out. 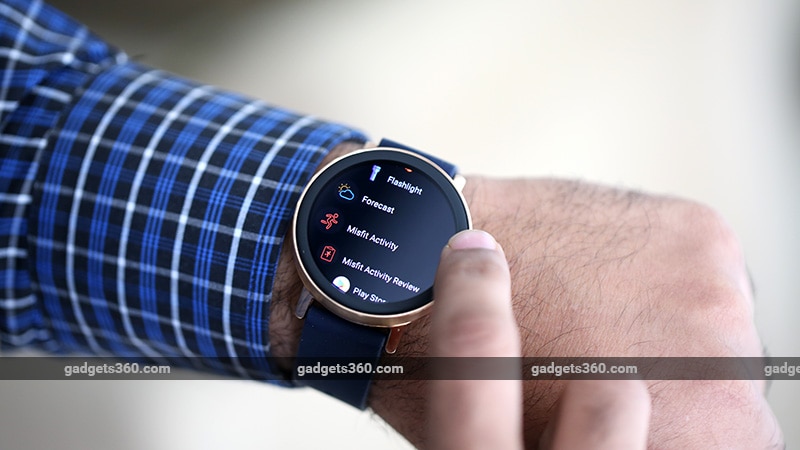 Misfit has gone the traditional way by opting for a circular watch dial. The Vapor sports a 1.39-inch round AMOLED display and has a touch-sensitive bezel that can be used for scrolling, like the click wheel on Apple iPods. There is no "flat tyre" for sensors like with the Moto 360 watches. When you unbox the watch, the dial and the straps are packed separately. The Misfit Vapor uses 20mm straps which are made of silicone and have buttons for easy installation and removal. You can swap the included band for any other 20mm watchstrap that you like.

The casing is quite big, with a 44mm diameter and thickness of 13.5mm. It protrudes a little when you wear it on your wrist, and you will need to be a little careful not to accidentally hit it against things as you walk. The watch does not feel very heavy on the wrist but it isn't as light as the Skagen Falster. We found that the crown button is a little shallow which makes it hard to press. 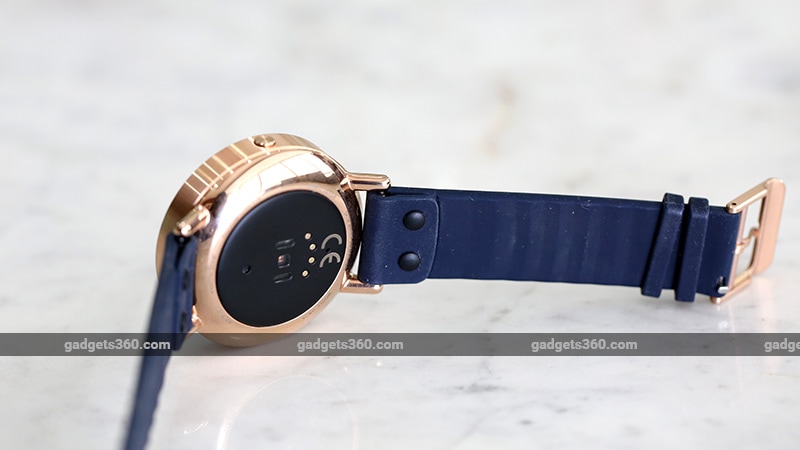 At the back, the Misfit Vapor has a heart rate sensor and pogo pin connectors for charging. It comes with a proprietary charger. There's no speaker. like we saw on the Diesel On Smartwatch, and there's also no built-in GPS or NFC. Being a fitness brand, Misfit could have included GPS to help users track activity better.

Like most other Android Wear devices, the Vapor sports a Qualcomm Snapdragon Wear 2100 processor. This processor is now quite old, and Qualcomm has announced an upgrade which should be coming soon. The Vapor has 512MB of RAM and 4GB of internal storage. You can use the storage to install watch apps or store music downloaded from Google Play Music if you have a subscription. You can also use apps like Media Player for Wear to transfer music stored on the phone to the smartwatch. We could listen to music stored on the phone by using Bluetooth headphones. There's also support for Wi-Fi 802.11 b/g/n. Misfit hasn't mentioned an IPxx rating for the Vapor but says that the watch is "swim-proof" and water resistant up to 50m.

The Vapor runs Wear OS 1.2 which is based on Android 8.0 Oreo, and has the February security patch. Its interface is similar to that of every other Wear OS device in the market. To use the watch with your smartphone, you will need to be running at least Android 4.4 or iOS 9.3. The Wear OS app is required to pair the watch with your smartphone and push notifications onto the watch. 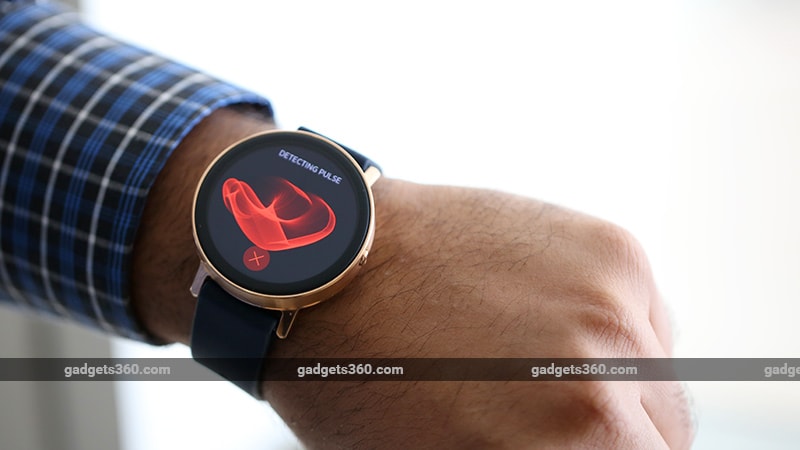 Misfit has made a few customisations, such as adding its own watch faces. These are made with fitness in mind and so you shortcuts to check your activity throughout the day and measure your heart rate. Watch faces are completely customisable and you can change the colour of pretty much every single element. You can also download more faces from the Google Play store if you want something different. Misfit has also included a few apps - Forecast gives you updates about the weather, Misfit Activity keeps track of the steps you take, and Pulse lets you measure your heart rate. There's not a lot that makes this watch stand out from the competition.

The Misfit Vapor has a good screen that gets bright enough to be viewable outdoors. It also has great viewing angles. We liked the touch response, and the virtual scroll wheel makes it easy to move through all the cards that you have pending. Just like the Falster and newer Android Wear devices, the crown can be used as a back button or to bring up apps when you're at the home screen.

When we started reviewing this smartwatch, we did observe a few stutters and occasional lag. However, it received a software update which ironed out all these issues, and the experience was then smooth. We used a Google Pixel 2 XL paired with the Misfit Vapor, and had no issues with the watch pulling notifications from the device. Since there is no speaker on the watch, all calls are handled by the smartphone itself.

You'll need to download the Misfit app and set up a Misfit account to enable heart rate and activity tracking. Without this, you can measure heart rate but not keep a log of it. The Misfit app is easy to use and gives you an idea of the number of steps you have taken and the number of calories burned each day. We couldn't find active sleep tracking which is a disappointment, but this watch is too bulky to wear comfortably while sleeping anyway. If you want to try sleep tracking you can use third-party apps like Sleep As Android which can be downloaded on to the watch. It doesn't have automatic sleep tracking, so you'll need to manually start sleep tracking every time.

Activity tracking has to be triggered manually. It's fairly accurate, and the connected GPS feature helps the Vapor record distances. We went for a walk on a course which we know is 1km and found that the Google Fit app running on our Pixel 2 XL displayed 1.07km while the Vapor recorded 1.01km. 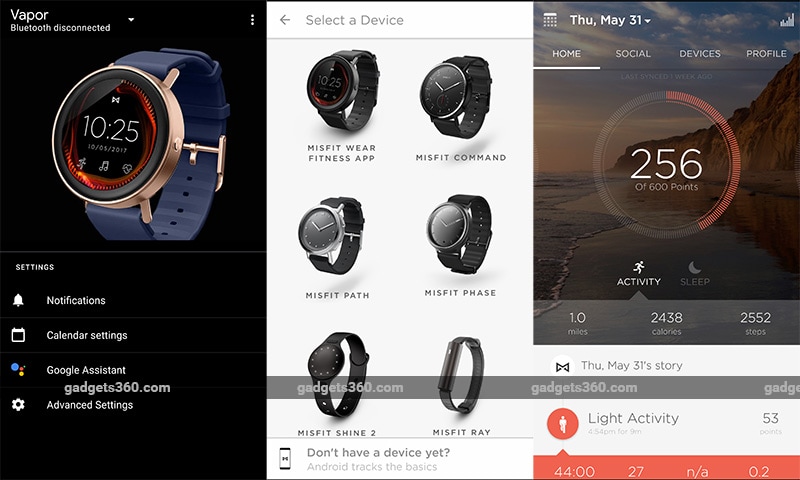 You can long-press the crown or say the phrase "OK Google" to call up Google Assistant. Hotphrase detection is switched off by default. Wear OS also has gestures so you can flick your wrist to navigate through the watch UI once you enable this.

Battery life for the Misfit Vapor is below average. Taking the watch off the charger at 9am and going through our day with emails and WhatsApp messages coming in, the battery saver mode was triggered by 10pm. The Vapor does measure heart rate in the background throughout the day, which you can switch off to give the battery life a small bump. This watch takes nearly two hours to charge, so even though the battery might be able to stretch to the next morning, it's best to plug it in to charge each night.

Verdict
The Misfit Vapor is priced at Rs. 14,495 and is available exclusively via Flipkart. Compared to other Wear OS devices currently in the market, the Vapor does offer a few useful features. You get a heart rate sensor and a virtual scroll wheel that is quite useful for UI navigation. However, the battery life is strictly average, and Wear OS has not seen any significant update in a while.

Google is rumoured to have a big update planned for Wear OS later this year, and new watches are expected at the same time. Also, we would recommend that you wait to see whether these new models will be powered by the upcoming Snapdragon Wear processors.

If you are an iPhone user, you may want to consider the Apple Watch Series 1 that is available for Rs. 15,900 after an Rs. 7000 cashback. It works much better with an iOS device right from better interactive app support to the Activity app which simplifies fitness tracking for you. If you can't wait, then at least watch out for discounts online. The Misfit Vapor was going for Rs 9,999 in the last Flipkart sale, which is a more reasonable price for what's on offer.

Further reading: Misfit, Misfit Vapor, Misfit Vapor Price, Wear OS
Aditya Shenoy Email Aditya
Aditya Shenoy reviews smartphones, wearables, headphones and speakers for Gadgets 360, out of Mumbai. Aditya is a reviewer for Gadgets 360 and has written extensively about smartphones, software updates, and upcoming devices. Aditya is available on Twitter at @adishenoy, and you can mail him at adityashenoy@ndtv.com, so please send in your leads and tips. More
Unravel Two Is EA's New Co-Op Game, Releases Today
Sea of Solitude Is EA’s Next Indie Title