The smartwatch industry is facing a crisis at the moment. Global volumes are less than half of what they were a year ago, and big brands like Huawei, LG and Motorola have may not launch new smartwatches this year. On the other hand, fitness trackers are seeing steady growth thanks to more competitive pricing and a growing feature set.

In the past, we’ve seen high-end watch manufacturers try their hand at this game, and most recently, Fossil Group launched a bunch of hybrid smartwatches under designer labels including Michael Kors and Skagen, along with the Fossil brand. The Q line of smartwatches includes the Q Marshal and Q Wander, aimed at men and women respectively. We have the former to test today. Although it has a premium badge, is it any good at regular smartwatch duties? Let’s find out.

Fossil Q Marshal design and build
The Q Marshal is one of the best looking smartwatches we’ve come across. It closer to looking like a traditional watch than anything else we've seen. The watch case is built out of stainless steel with either a black coating or in its natural form, if that’s more to your taste. Our unit came with black silicone straps but you can opt for leather straps, and oddly, both cost the same. The straps are removable so you can use any 22mm ones with the Q Marshal.

The thickness is 14mm, which we found to be just the right size for our wrist. There’s a crown on the right just like you'd have on a traditional watch, but it only serves as a button. A short press will turn the screen on or off; a long press will take you to the apps list; and a double-press enables ‘Theatre mode’ in Android Wear. There are machine-drilled holes for a speaker on the left and a microphone on the right.

The circular 1.4-inch, 320x290 pixel resolution LCD display is similar to that of the first-generation Moto 360 including its annoying ‘flat-tyre’ design. This tends to destroy the illusion of using an actual watch. Also, since this display is not an OLED panel, the always-on watch faces don’t have the same dramatic effect as they would on other watches. Colour reproduction feels a bit dull due to narrow viewing angles, and the display has a noticeable ghosting issue which is apparent when you’re swiping through watch faces. However, sunlight legibility is pretty good. 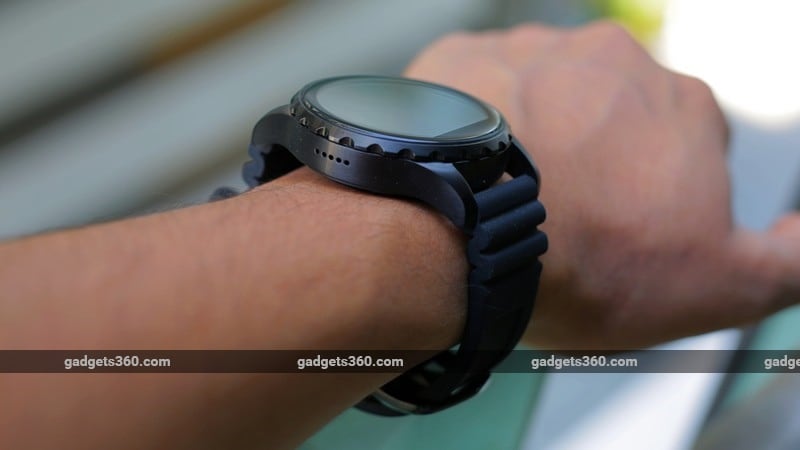 The Q Marshal comes with an inductive charging cable that snaps onto the bottom of the watch magnetically. This, and some instruction booklets, are all you get in the box. The device itself is rated IP67 for dust and water resistance.

Fossil has done a good job with the build and design of the watch, with the Huawei Watch coming in as a close second. However, we wish the display had been fully circular and of a higher quality. You’ll also notice that the Q Marshall lacks a heart rate sensor, which might not make a difference to some, but we expect it to be present on a device with this kind of premium pricing.

Fossil Q Marshal specifications and features
The Q Marshal is one of the first smartwatches to sport Qualcomm’s Snapdragon Wear 2100 SoC, which was designed especially for wearables. It doesn’t have LTE so the watch will need to be tethered to your phone for notifications. There’s 4GB of onboard storage, of which 2.1GB is usable. In terms of sensors there’s a compass, a gyroscope, and an accelerometer. You get Bluetooth 4.1 Low Energy, Wi-Fi 802.11b/g/n, and a 360mAh battery. 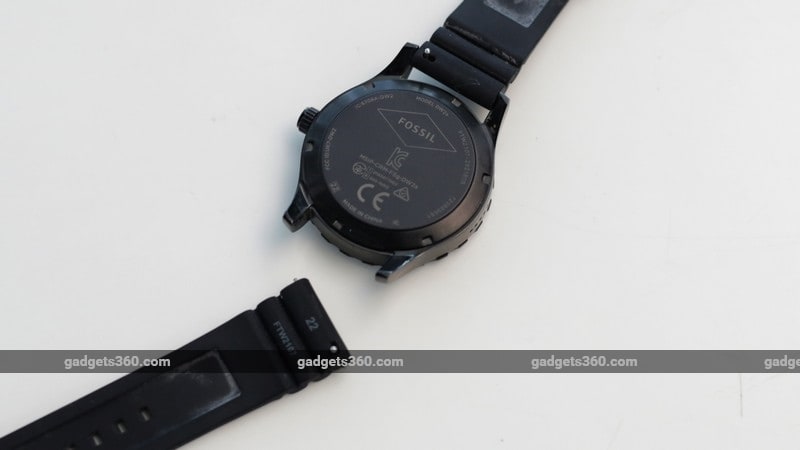 The Q Marshal runs on Android Wear 1.5, and is compatible with Android as well as iOS devices. Like all such smartwatches, the look is Google's stock UI. There is a Fossil Q app but all it does it lets you change the watch face. You get all the standard apps including the flashlight, calculator, alarm, stopwatch and Google Translate. Other apps like Maps, Hangouts and third-party ones are automatically synced when you pair the Q Marshall with your phone or download a new app onto your phone.

Fossil Q Marshal performance
Wearing Fossil’s take on the smartwatch feels pretty much like wearing any regular watch. The silicone straps are comfortable for everyday use, although they do pick up lint and dust very easily. The leather straps would be our preferred choice as they look more formal. Lifting your wrist to see the time makes the screen light up reliably. There isn’t a wide variety of watch faces to choose from, but nearly all of them can be customised. The ones that we ended up using most often were Machine, Grant, and Speedometer.

You can add more watch faces and customise your notifications through the Android Wear app on your phone. Performance is generally good but there are times when the watch behaves very sluggishly, for unknown reasons. It tends to lag sporadically, even if you’re doing simple things such as interacting with a notification. We also noticed that setting the display to always-on and using a watch face something static like Fossil logo causes a temporary burn-in, making it faintly visible on other screens too. This is another indication of the Q Marshall being saddled with a low-quality panel. 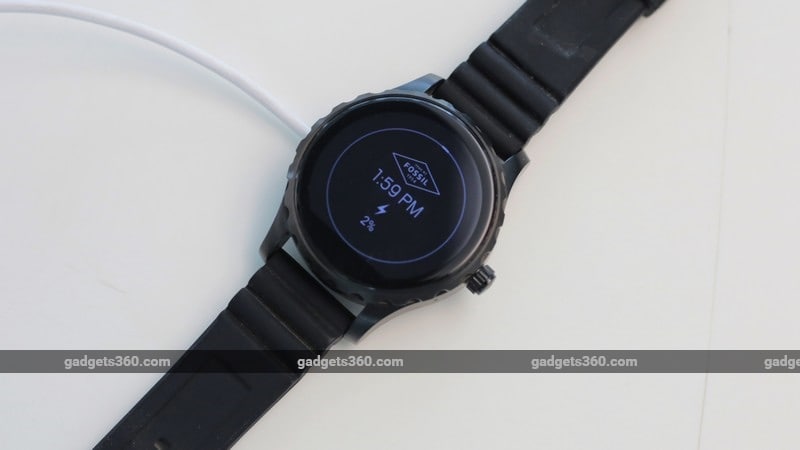 The device is capable of handling phone calls, which can be enabled from the Bluetooth settings menu on the watch. However, the speaker volume isn’t very loud so you’ll only be able to have a conversation in a quiet room and holding the watch right up to your face. The microphone does a good job at capturing your voice clearly, but callers are able to hear their voices echo through since the speaker and microphone are so close. This is an issue we've had with earlier Android Wear smartwatches too, with this feature.

In our experience with the Q Marshal, the ‘Ok Google’ command for voice assistance didn’t work all the time. Functionality is limited when it comes to replying to mails and messages. You can use Google Voice but this only works well if there isn’t too much ambient chatter, which is the case with most Android Wear smartwatches. You can still choose from a series of generic replies, though this will change with Android Wear 2.0 when it comes out early next year.

You can control music playback, and this works across popular music apps like Spotify and Apple Music. The Play Music app also lets you sync some files onto the watch so you can listen to them without your phone. There are some fun games you can download from the app store for the watch, to pass your time, which include Minecart Jumper, Nougat Land, and PaperCraft, but these will make a sizable dent in your battery level.

Battery life has improved quite a bit since the last time we tested an Android Wear smartwatch, and we feel that this is mostly down to the new wearable-focused Qualcomm SoC. With regular use and the display set to always-on, we clocked in more than a day of usage before we needed to recharge the watch. Fossil claims tgat the Q Marshal can charge up to 80 percent in less than two hours. In reality, we managed to get up to 60 percent using a 10W adapter. Charging fully through a standard USB port is painfully slow, taking a good five to six hours. 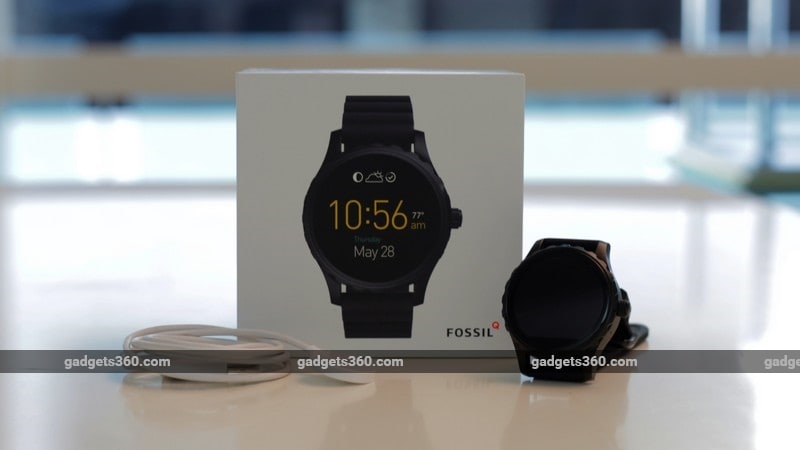 Verdict
The Fossil Q Marshal is priced at Rs. 21,995 and is backed by a two year warranty. Even though it bears a luxury brand name, this is simply way too much money for what is essentially a basic Android Wear smartwatch. Fossil has done a commendable job with the build and design here but everything else just feels underwhelming. The biggest problem is the poor quality of the display, which detracts from the premium experience one would expect from such a brand. The lack of a heart rate sensor is also surprising.

Android Wear is also a factor in the limited functionality of this watch. It’s no wonder that some brands are considering switching to Tizen for their future models. Numerous leaks are pointing towards Google unveiling its own line of smartwatches early next year, which might explain why we haven’t seen anything new from Motorola and other companies in a while. The new ‘Pixel watches’, if you will, should set the standards for the next generation of smartwatches as well as the platform itself, so it’s advisable to wait. If you absolutely cannot wait that long, the Samsung Gear S2 is likely to be a better option.