As much as there is a tendency to group fitness trackers and smartwatches into one category, they offer rather different experiences. The latter have largely failed to convince consumers, whereas the former – including Fitbit's products – lead the market. Continued success prompted the company to try and blur the lines between the two with the Blaze, but the result wasn’t exactly perfect.

And so with its newest launches, Fitbit has doubled down on what it does best: fitness tracking. The Charge 2 and Flex 2 mark the first time Fitbit has offered direct sequels for devices in its lineup. According to the company, the Charge has been its best-selling line, so it was only natural that it would be iterated upon sooner rather than later.

As far as the design is concerned, the Charge 2 seems to have evolved from the first-gen Charge while borrowing some elements from the recently launched Alta. Being a successor, it’s got improvements: a much larger display, connected GPS (it links with the GPS on your smartphone), guided breathing exercises, and a cardio fitness metric that rates your fitness against other people of your age and gender. Some of these changes are down to user feedback, Fitbit told Gadgets 360 in a recent interview.

The screen is the most obvious change about the Charge 2. As opposed to the single-line ticker display on older Charge devices, the new one can fit four lines of text on its screen. You can see the time, date, number of steps taken, and your current heart rate – depending on the clock face you choose to go with. But the screen's visibility suffers outdoors, with text almost impossible to decipher under harsh sunlight. 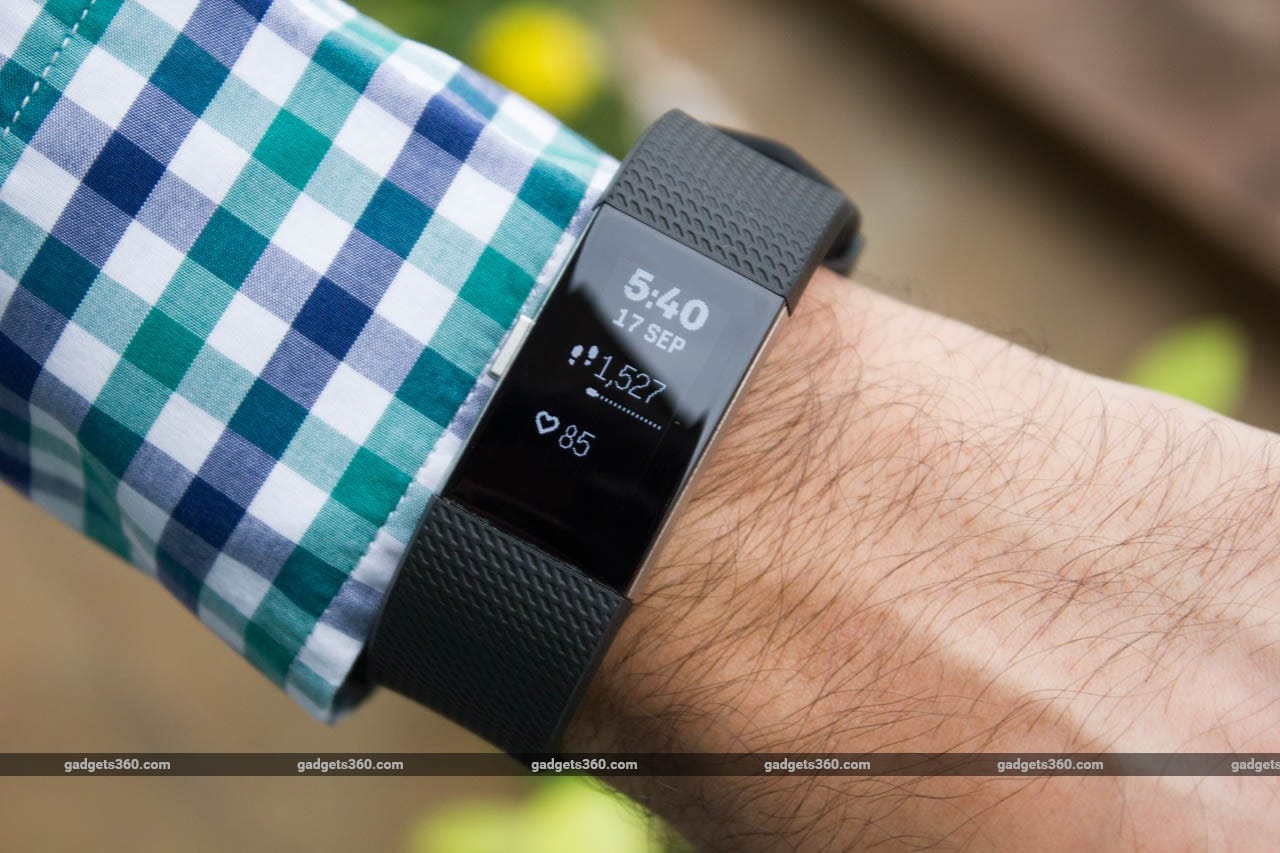 Touch sensitivity is as good as what we’ve seen so far on other Fitbit products. You have to tap the screen hard to bring up the display or cycle through other stats – distance, calories burned, floors climbed, active minutes, and reminders to move. Like with other Fitbit products, you can swing your arm up to turn the display on if you want a quick glance on how you’re doing for the day or during an activity.

As with previous Charge units, the Charge 2 has a physical button that controls its menu interface. The first press brings up the clock face, and then each subsequent press cycles you through heart rate, exercise, stopwatch, “relax” i.e. breathing sessions, and alarms. Where the Alta showed your alarms as part of the stats on the home screen, here it’s buried in the button-press menu for two reasons. One, the advantage is that you can cycle through all your alarms on the device itself rather than having to go into the Fitbit app. Two, you can turn any existing alarms on or off by pressing and holding the menu button when the alarm is displayed.

This works for other items in the menu too, the exercise menu cycles between the activities you’ve selected in the app (be it run, weights, treadmill or half a dozen other choices), the relax option alternates between 2- and 5-minute sessions, with the stopwatch function the only standalone option and one we feel could have done with a timer feature as well, which would have been great for setting quick reminders.

The Charge 2 is part of Fitbit’s active fitness sub-brand, the middle of three tiers; which makes it suitable for people who care a lot about their fitness regimen. It doesn’t have in-built GPS, so professional athletes might find it unsatisfactory. However, the company doesn’t want to cater only to runners. The Charge 2 has multi-sport support, Fitbit says, which means it can help you with other activities such as weightlifting, treadmill, workouts, elliptical, bike, yoga, spinning, pilates, boot camp, circuit training, tennis, golf, kickboxing, martial arts, stair climbing, and more. 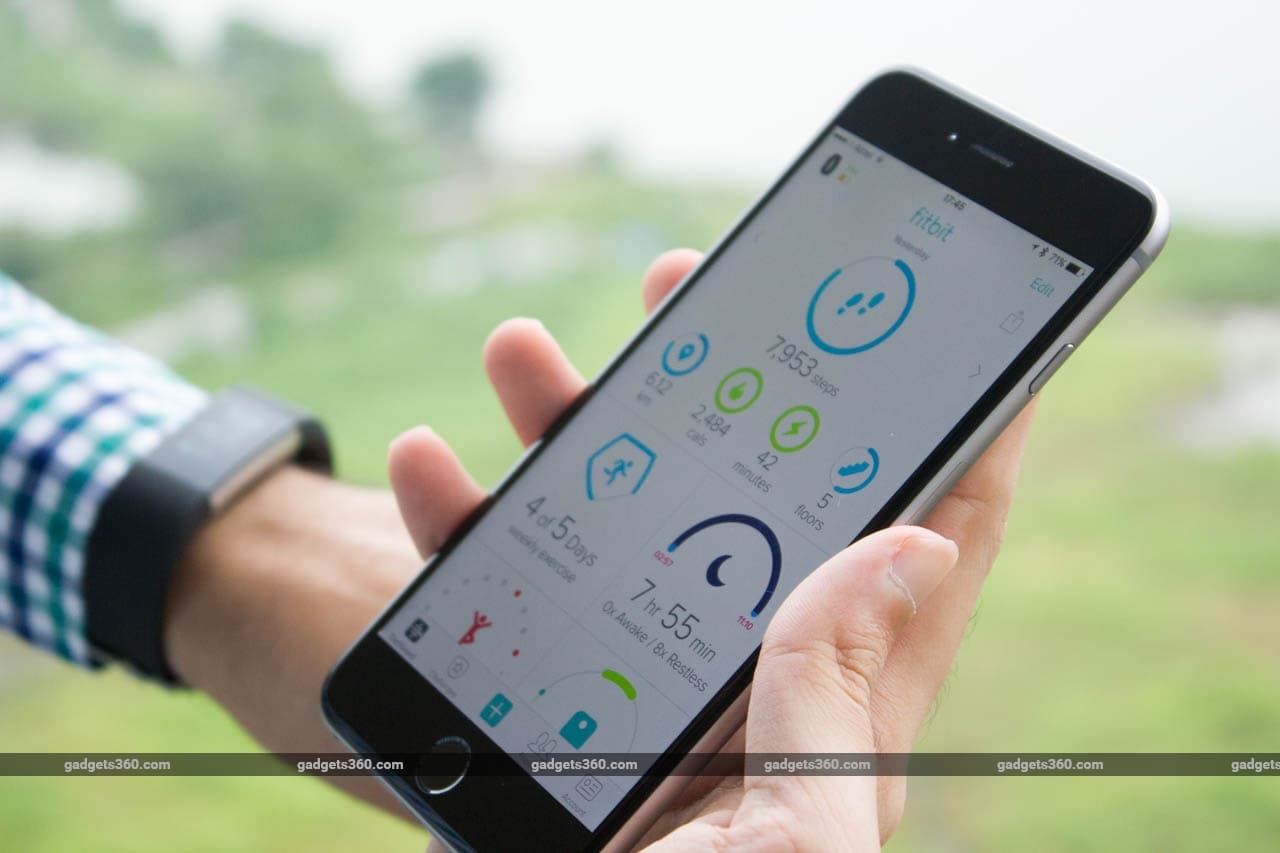 The newest Fitbit device has an altimeter like its first-gen counterparts, so it can count stairs as well. You can set your daily aim for floors and more in Account > Activity Goals in the Fitbit app, which has a default target of 10,000 steps, 8 km distance, and 10 floors per day. You can also choose the time of day you wish to mark as active hours, so Fitbit’s reminders to move will only disturb you during those set hours.

As always, Fitbit continues its cheery messages to get you moving, with the Charge 2 prompting you to “Feed me steps!” or “Wanna stroll?” every 10 minutes to the hour if you’re being inactive. Should you complete these tasks, expect more encouragement – “You won the hour!” being one such message – and a full-on monochrome fireworks display when you meet your daily target.

Fitbit’s SmartTrack tech is present in the Charge 2 as well, meaning it will automatically detect activities even if you were to forget to begin tracking them from within the app. It works great, albeit with some caveats. On one occasion, an 18-minute bike ride appeared as a 25-minute bike ride on the app because we had walked before getting on the bicycle. However, on other occasions, it was on point with a 20-minute jog and a 30-minute walk.

Step tracking accuracy is impressive on the Charge 2. Tested with its Connected GPS feature off with mile-marker inscriptions on a path for reference, the wearable produced an error rate of just 2 percent over multiple walks (with an average distance of 2.5 km). On one such walk, we covered a distance of 1.46km according to the milestones, and the Charge 2’s recording was 1.45km.

Sleep recognition works whether you sleep at night or during the day, with great accuracy. On 12 of 13 times we slept while wearing the Charge 2, the wearable was largely on point, missing only a minute or two with its measurements. Only on one occasion did it goof up, recording 15 minutes longer than we had slept, which we chalked up to the fact that we had been sitting for 10 of those minutes.

The Charge 2 also has a silent alarm function which can wake you up by vibrating gently - something that most wearables offer. It’s a great feature, more so if you hate being jolted awake by loud sounds. Pair it with the Sleep Goals function in the Fitbit app, and it will send you reminders of the time and days of the week as you choose. 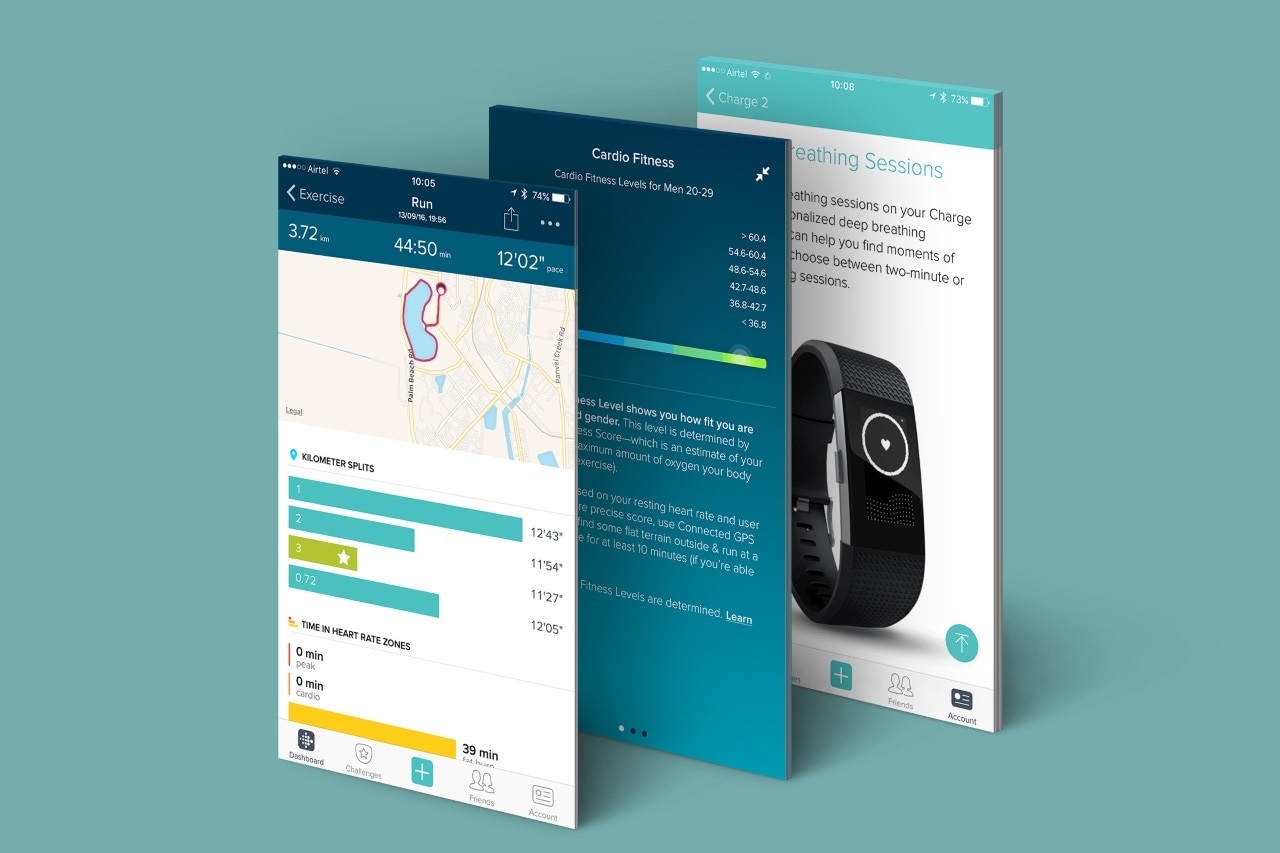 All the new things
Connected GPS, which we first saw on the much costlier Fitbit Blaze, is one of the upgrades to the second-gen Charge 2. It uses your paired phone’s data to tell where the watch is, and so you can have a map of your workout alongside the usual stats such as pace and heart-rate once you’re done.

The other new metric is what Fitbit calls Cardio Fitness Level. Exclusive to the Charge 2 for now, it ranks your fitness compared to the average for people of your age and gender. The company says it’s “an estimate of your VO2 Max (the maximum amount of oxygen your body can use during exercise)”.

That’s how it should be seen really, as an estimate, because evaluating VO2 Max properly requires running on a treadmill with an oxygen mask in a controlled lab environment. You can improve your score with “consistent exercise and high intensity training” and increase your VO2 Max by up to 20 percent, Fitbit says.

The third new – and exclusive – feature is the Relax mode. A similar feature, called Breathe, is available on the Apple Watch with the newest software update, watchOS 3. With Relax on the Charge 2, you can choose between 2 minutes and 5 minutes of guided breathing sessions, wherein the wearable will guide you through deep breathing routines customised using your real-time heart rate. It’s a pity that there are no vibrating prompts, which means you can’t close your eyes and focus completely on the breathing exercises. 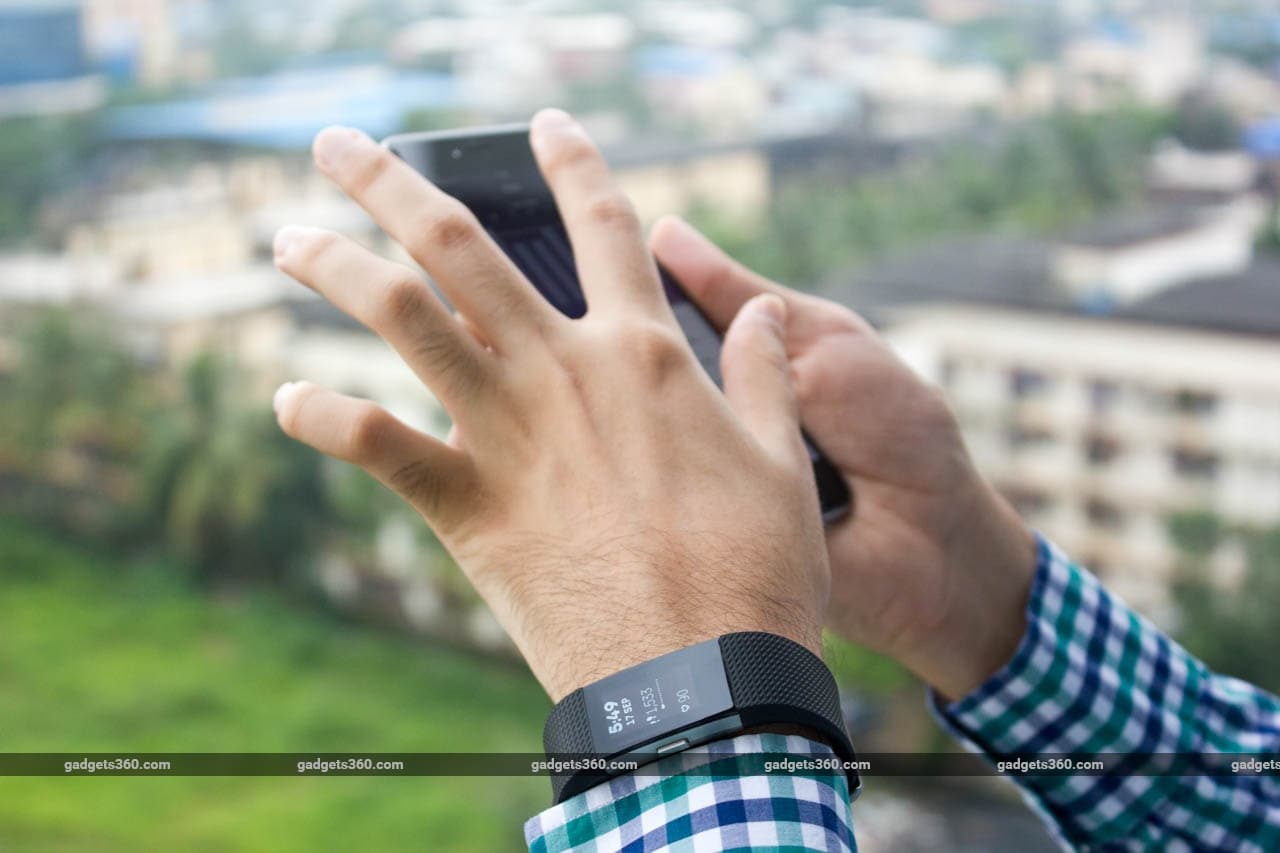 While the new features are all well and good, the Charge 2 carries over some niggling issues from previous Fitbit devices. Though it handles alerts – for incoming calls, texts, and calendar – messages get cut off after less than 40 characters, just like with the Alta. As with other Fitbits that have a screen, you can’t reply to messages either, so the screen isn't really useful except for knowing who a message or call is from. Alerts are different in the sense that there are two tickers. First the sender’s name scrolls and only when that’s done, does the message start scrolling.

The new Fitbit wearable also misses out on full waterproofing, which the company seems to have reserved for the upcoming Flex 2, scheduled for a release in October. The Charge 2 sticks to the standard "sweat, rain and splash proof" promise, meaning you shouldn’t take it into a shower or swimming pool.

The last of the niggling issues with the Charge 2 is that it requires yet another new charging cable, a gripe we share with every other Fitbit user. When we reviewed the Alta we reported that replacement cables weren’t available from Fitbit’s official partner, Amazon India, even months after release - and they still aren't. The Charge 2 is now available for purchase, but there's no sign of charging cables. Even if you manage to find one, you’ll need to pay around Rs. 1,500 for a replacement.

Verdict
When you’re trying to improve upon your most popular product, you'd better have some good ideas. With the Charge 2, Fitbit has brought its A game – giving it a much-needed upgrade in the screen real estate department along with a couple of new features – Cardio Fitness and Guided Breathing – which are exclusive to the new device (for now, at least). For those who own a previous-gen Charge device, the screen size alone warrants the upgrade. 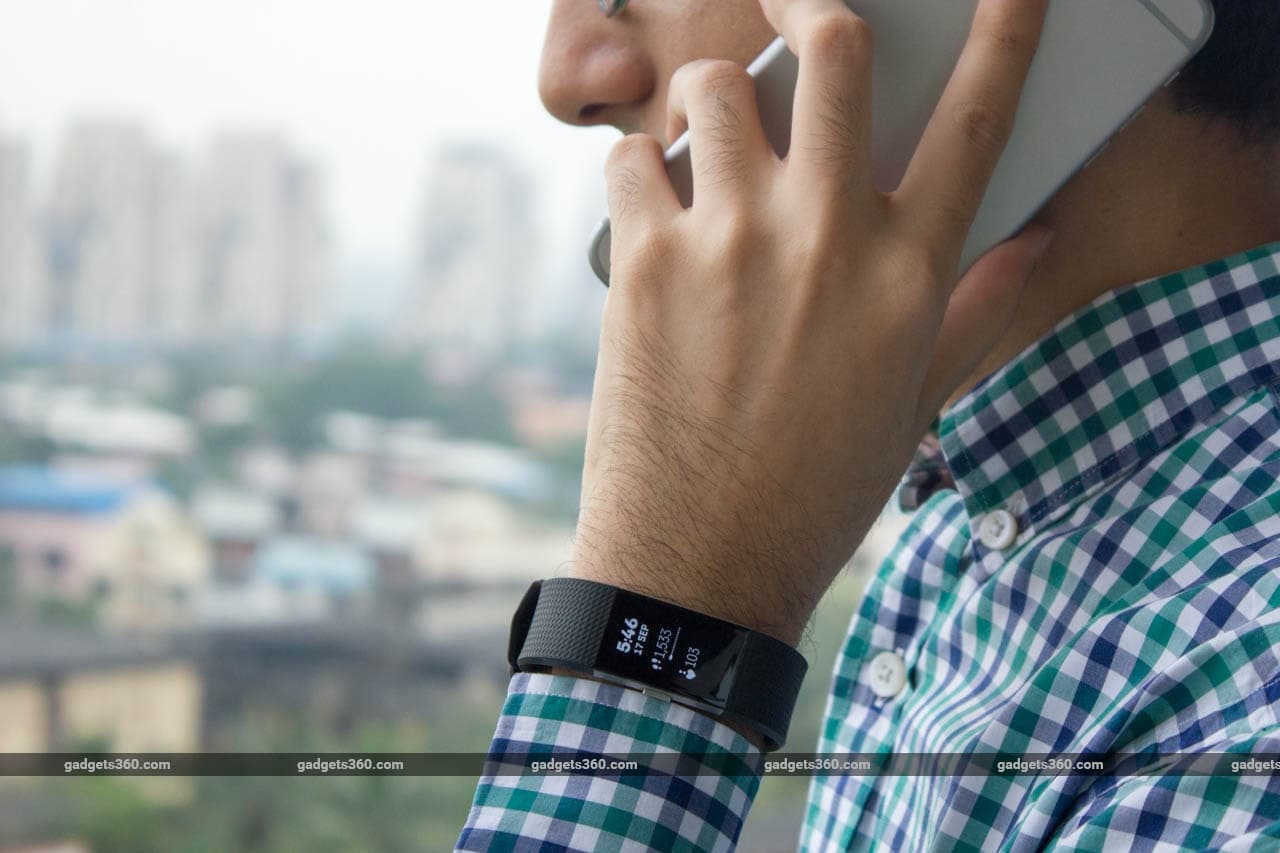 It may not be a colour screen like the Fitbit Blaze has, but that does mean longer battery life. Fitbit says up to five days, but we got six days out of it with moderate usage. Plus, it’s less bulky, looks better, and costs a full Rs. 5,000 less.

If waterproofing or GPS is a must, you’ll need to look at products like Garmin’s Vivosmart HR or Forerunner 230. But that’s an entirely different category, not to mention the extra money you’ll need to put down. For most people then, the Fitbit Charge 2 will be the best fitness tracker available.

product The first direct sequel to a Fitbit device gets a much bigger display and some exclusive features, making it the fitness tracker to beat in its price range. 4.5 out of 5 stars