Made for tech companies, adopted by fashion brands - that is one of the best ways of summarising Android Wear. The platform was first introduced to bring the Android operating system to the wrist, but now that smartphone manufacturers haven't had much luck appealing to wide audiences, fashion brands are having a go. Popular brands such as Fossil and Michael Kors, most of them under the Fossil Group umbrella, have launched smartwatches including the Q Marshal and Access.

Diesel, a popular name in the fashion industry, also licenses its name to Fossil Group to manufacture watches. It has already had a go at a hybrid watch, the Diesel On, and has now launched an Android Wear model called the Diesel On Smartwatch. Priced at around Rs. 25,000, can it make a strong case for Android Wear? We find out.

Diesel On Smartwatch look and feel

Diesel watches are known to have big chunky cases and funky bands, and this smartwatch follows the same design principles. The watch has a big 48mm aluminium case that is sure to draw attention. Diesel has gone ahead with a dual-colour design with black machined finish for the bezel while the rest of the body is silver, making it stand out. The display is set lower than the bezel rather than flush with it.

To keep the case and the display safe, there are four sidepieces that also function as a design element. On the right side, these pieces have hardware buttons with the crown in between. On the left, there are has two screwheads and a speaker grille in between. The crown can be pressed and rotated in either direction. If you take a closer look, it also sports the Diesel logo on it. Overall, the design is quite similar to that of Diesel’s analogue watches in the market. 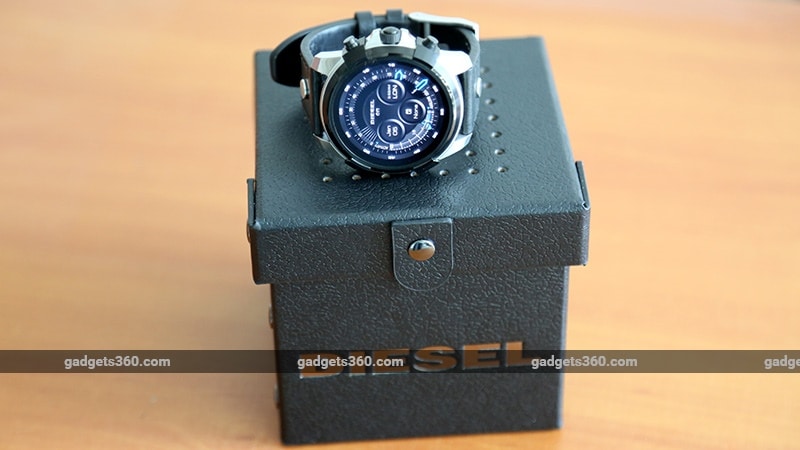 Flip the watch over and you can see that the metal rear cover has an acrylic window in the middle to facilitate wireless charging. Diesel hasn’t let go of a branding opportunity and the charging window has another logo on it. Sadly, the Diesel On Smartwatch misses out on a heart-rate sensor which is fairly common on competitors' models at this price.

The Diesel On Smartwatch is sold in two variants in India, one with a metal strap and the other with a leather strap. Our review unit had a 24mm leather strap with quick-release pins that make it easy to swap it with any standard 24mm watchband. The leather strap has two screwheads riveted on for looks. The watch weighs around 96g and does make its presence felt on your wrist without really getting uncomfortable.

Diesel On Smartwatch specifications and features

While the design is typical Diesel, the hardware is similar to most other Android Wear devices in the market. The Diesel On Smartwatch is powered by the Qualcomm Snapdragon Wear 2100 platform and has 512MB of RAM. While this does seem low in comparison to what modern smartphones pack in, it is adequate to run Android Wear 2.0 without any hiccups. There is 4GB of internal storage which can be used to store apps downloaded from the Play Store as well as music if you have subscribed to Google Play Music.

There's a 1.4-inch round AMOLED display which does not have a flat tyre design like the Moto 360 (2nd Gen), which means the entire display is utilised. There's an ambient light sensor and so the watch is capable of adjusting its screen brightness based on light conditions. Viewing angles are good and the display is viewable outdoors. There's Bluetooth and Wi-Fi connectivity, but no GPS or NFC.

Diesel ships a charging cable in the box with a wireless charging pad on one end and a USB Type-A plug on the other. The wireless charging pad looks a lot like the one shipped with the Apple Watch. Charging time depends on the adapter you plug the cable into. We used a 10W charger and it took over four hours to take the smartwatch's 370mAh battery from flat to full. 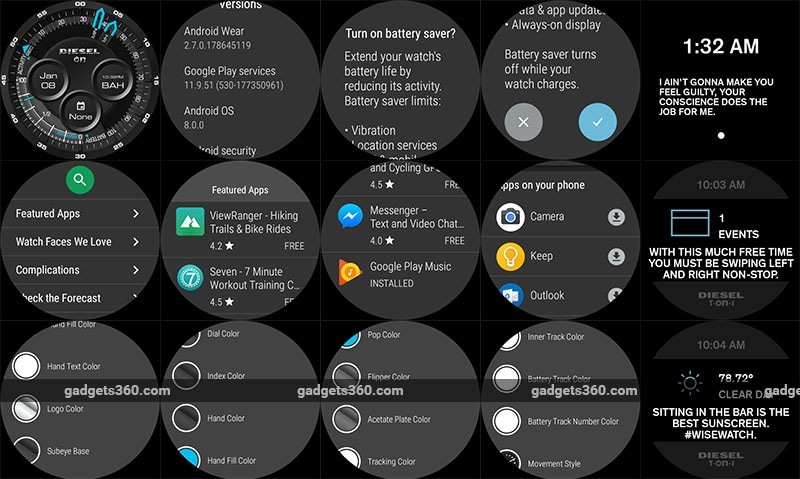 The Diesel On Smartwatch runs on Android Wear 2.7 on top of Android Oreo. It's compatible with phones running Android 4.4 or above and also with iPhone models running iOS 9 and above. Diesel has added quite a few of its custom watch faces for you to choose from, and each of them can be tweaked to the minutest detail. You can also download more watch faces from the Play Store. Supported standalone apps such as Telegram can be downloaded and used when the watch is connected to Wi-Fi. For text input, you have the option to trace alphabets, type using an onscreen keyboard, or use speech-to-text.

Diesel has preloaded a few of its own apps, called Dial Effects and Diesel T-ON-I. Dial Effects has Weather Mode, which shows animations to represent the weather at your current location; Activity Mode, which shows how active you are; and Do Not Disturb mode which causes a shatter animation to play every time a notification comes in. If you have been inactive for a while, it fills the watch face with virtual dust. The T-ON-I app conveys information about the weather, current time, and your activity.

Android Wear is quite light, and the Diesel On Smartwatch can run it without any issues. We faced no lags but you might occasionally see a loading screen for large apps. While a majority of the watch operations are touch-based, the crown can be pressed in to call up a list of installed apps. Rotating the crown lets you scroll through the list, and pressing it again acts as a Back button. The two buttons on the watch are completely customisable and you can set them up as shortcuts to launch your favourite apps. 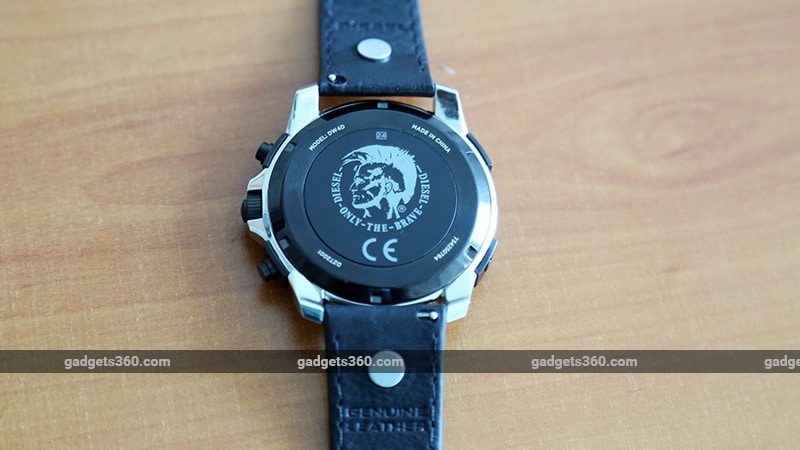 Calling is supported on the watch via Bluetooth. However, this isn't turned on by default and you’ll need to go into the Bluetooth settings menu to do so. Calls can be initiated from the watch and are routed through the paired phone. We had to pull the watch up to our ear to hear what our callers were saying, and they also complained that we sounded tinny. We used a Google Pixel 2 (Review) to test the watch and found that call quality was quite erratic. At times, when answering incoming calls on the phone, neither party could hear the other. We were able to converse when we turned Bluetooth off and just used our phone normally, so to us this seems like an Android Wear issue. While we were able to pair a Bluetooth headset with the watch, we couldn't use it for voice calling.

Battery life is one area in which the Diesel On Smartwatch falls short. It managed to run for one day with normal usage such as checking notifications and occasionally answering a few calls, with the Always-On mode enabled. With the battery saver mode, the watch managed to go for a day and a half. Overall, battery life isn’t great and the long charging time provides no relief. We would highly recommend charging the watch every night before going to bed.

Verdict
Fashion brands have shown a keen interest in wearable tech, and the Diesel On Smartwatch is a fine example of that. It scores in terms of looks, but it does seem overpriced for what it offers. It lacks GPS, NFC, and a heart-rate sensor which are common on smartwatches at this price point. If you are considering this smartwatch, do keep in mind that you are paying more for the brand and the software customisations. If you are using an iPhone, the Apple Watch Series 2 will offer you more value for money despite the slight premium. If you are on Android and are more concerned with functionality than looks, you might want to try to get your hands on the Asus ZenWatch 3 or the Huawei Watch 2 instead.