Apple announced its entry into the wearables market when it unveiled the Apple Watch a little over three years ago. At the launch event, Apple positioned the Watch as a bit of an all-in-one accessory that could be your comprehensive health and fitness device, but it was also designed to let you “connect and communicate directly from your wrist” using new “intimate ways” like the rather awkward Digital Touch. In many ways, the original Apple Watch tried to be too many things for too many people; a departure from most first-generation Apple products that typically have fewer features than the competition, but rely on execution and attention to detail to win customers over.

The product was largely well-reviewed, though many, including us, questioned whether most people actually need a smartwatch. While Apple has been silent on the number of units it has sold to date, the Apple Watch seems to be the best selling smartwatch by all accounts, with some even saying Apple is now the biggest watchmaker in the world.

Physically, the Apple Watch might not have changed much, but there’s no doubt that both Apple and the consumers now see the smartwatch as a fitness-focussed device, with everything else intended to complement those functions. Apple has admitted this has been in response to user feedback based on how people were actually using the Watch out in the wild.

Last year, Apple enhanced the fitness credentials of the Apple Watch by adding GPS and water resistance, making the Series 2 a better standalone companion for runners, while opening it up to use by swimmers. This year’s big update - called Apple Watch Series 3 - brings optional cellular connectivity, an altimeter, and a faster Apple S3 chip as well as more RAM, all of which pave the way for some cool new features. Note that the GPS + Cellular variant of the new Apple Watch isn’t available in India (yet) as it uses a built-in eSIM that doesn't seem to be very popular with the Indian telcos. For this review, we received the non-cellular variant (or GPS, as Apple calls it) of the Apple Watch Series 3. 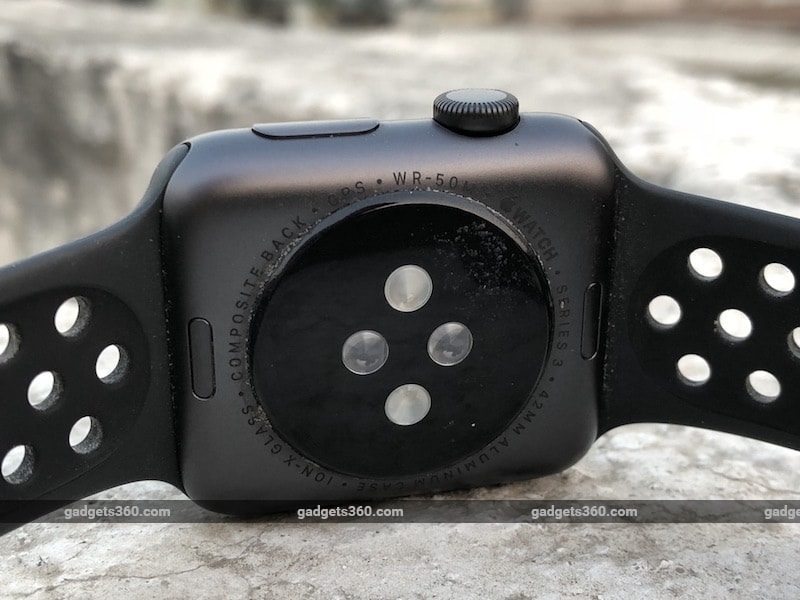 We noted in our review of the original Apple Watch that the 42mm model is rather chunky and something that will definitely be noticed on your wrist. We also predicted that this would improve as the Watch goes down the path of ‘thinner and lighter’ that’s almost inevitable for most Apple products. A little more two years later, we are still waiting for that evolution, since Apple has stuck to the same design language, and, in fact, the 42mm Stainless Steel Apple Watch Series 3 is marginally bigger and heavier than its counterpart from a couple of years ago.

As we mentioned earlier, since the original launch, Apple has managed to cram a GPS sensor, an LTE modem, and an altimeter into the Apple Watch, while also updating it with faster processors and more RAM, and making it water resistant. Given these additions, we are not surprised that the Apple Watch retains its ‘bulk’, though we believe that a new design might well arrive with the next iteration.

The new Watch is powered by Apple’s brand new S3 dual-core processor, which promises up to 70 percent more performance, and in our experience, the Watch delivered on this promise. Apps launch a lot faster than before, and switching between apps via the Dock no longer feels like a painful process. The speed benefits are especially evident when using Siri. While on our first-generation Apple Watch it wasn’t uncommon to have to wait a couple of seconds after saying ‘Hey Siri’, the newest Watch is ready to listen to your command almost instantly.

Processing the commands themselves isn’t that much faster, as we found in side-by-side comparisons with the original Watch, but the entire process definitely feels a lot more responsive, which can be the difference between people giving Siri a try one time and then forgetting about it, and them coming back to it every day. We found ourselves using Siri a lot more with the Series 3 Watch, be it for setting a quick reminder, or to check when Liverpool FC is playing next. 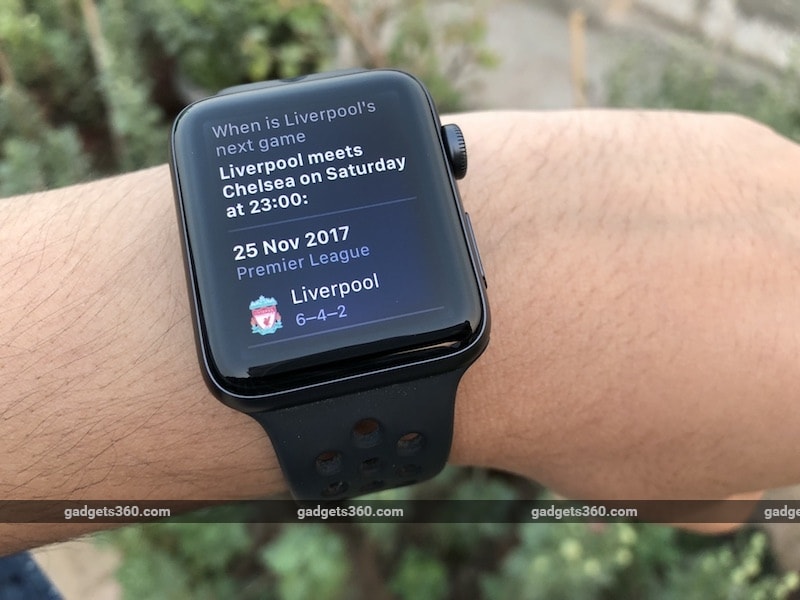 Another big change with Siri is that it can now talk back to you, just like on the iPhone and iPad, which is great, as you no longer need to keep staring at the Watch to see its response. If you are not a fan of this feature, or if you don’t want others eavesdropping on your conversations with Siri, you can set it to speak only when you have your headphones on, or to take its cue from the silent mode on your Watch, via the Settings in the Watch app on your iPhone.

The Apple Watch Series 3 also includes an Apple-designed W2 wireless chip that claims to boost Wi-Fi speeds up to 85 percent, while making both Bluetooth and Wi-Fi communication up to 50 percent more power efficient. While it’s hard to test some of these claims, we did find that the Series 3 Watch did a better job at things like handling calls over Wi-Fi when we were away from our iPhone.

In our review of the Apple Watch Series 2, we pointed out that the lack of an altimeter was a problem for serious runners, as elevation changes during workouts couldn’t be recorded unless you carried your iPhone along. The Series 3 fixes that, with the addition of a barometric altimeter. Not only can your Watch now track elevation changes during a run, but your daily activity summary now also includes “Flights Climbed” data that is being sourced from the Watch itself. If it sounds like this feature isn’t exactly new, it’s because your Watch was earlier capable of reading this data from your paired iPhone, which has included a barometer since the iPhone 6.

We found the flights climbed data tracking to be fairly accurate, and our experience with GPS accuracy and the rest of the activity tracking and fitness-focussed features was pretty similar to what we’ve seen with previous Apple Watch variants. We encourage you to read our reviews of the original Apple Watch and the Series 2 if you are curious about the subject.

The Apple Watch Series 3 ships with watchOS 4, which we’ve covered elsewhere, but it does have a couple of features worth touching upon here. Instead of the ‘boring’ pop-ups that simply updated you on your activity for the day, the Watch now mixes things up by telling you whether you are making good progress compared to an average day, or if you are “usually further along” on most days. Towards the end of the day, it gives even more specific messages such as telling you that a brisk 11 minute walk will close all your rings, which can be pretty motivating. The animations that you see as a ‘reward’ for closing your ring(s) are now a lot more elaborate, something we came to appreciate.

watchOS 4 introduces new watch faces including the Siri watch face, Toy Story, and Kaleidoscope. You also get a redesigned Workout app and a new High Intensity Interval Training (HIIT) workout type. Your Apple Watch (including Series 2) is now also able to automatically detect the kind of swimming stroke you used during a session. This lets you see a neat breakdown with the time and distance you spent alternating between different kinds of strokes; a touch that swimmers will really appreciate. 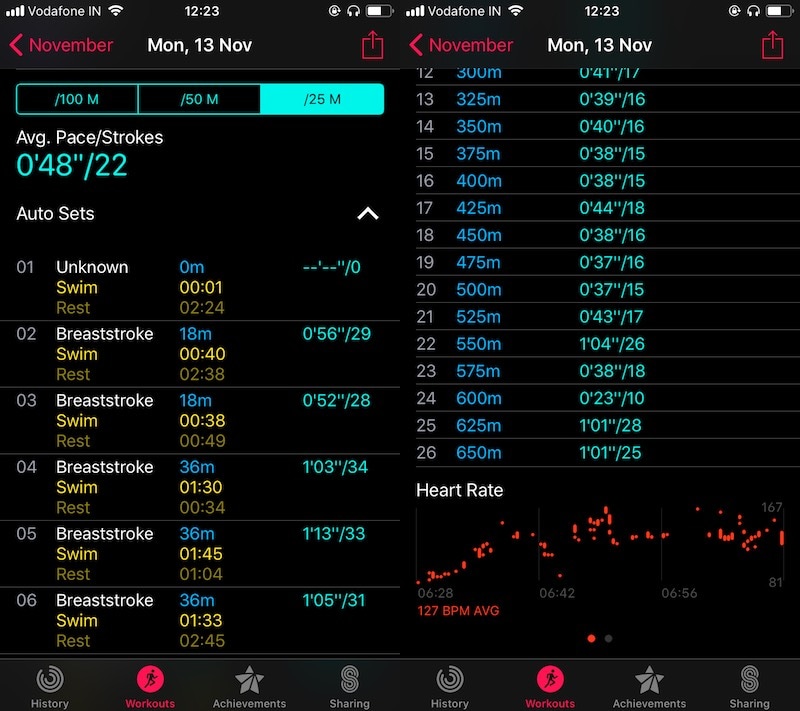 The watchOS 4.1 update also added the ability to stream music from the cloud via Apple Music directly on the Apple Watch. The feature works on both Wi-Fi and LTE variants of the Watch, but in our opinion, it would be a lot more useful on the latter.

We’d like to see watchOS open a little bit more and add support for third-party watch faces, similar to Android Wear. So far, Apple has done a good job of finding the right balance between adding features and optimising battery life, and one wonders if a future Apple Watch will have features like an (optional) always-on display.

Apple claims all-day battery life with the Series 3, and the Watch constantly topped that expectation during our review period. We easily got two days of life out of each full charge, with tons of notifications popping up on our Watch throughout the day, but with admittedly limited workout sessions, so we weren’t really using GPS for the most part. Our long-term experience with the Series 2 and the original Apple Watch shows that even after one and two years respectively, you should get at least one-day battery life without any problems even if you lead a more active lifestyle.

The process of untethering the Apple Watch from the iPhone started when the Series 2 added GPS functionality, and it continues with the Series 3 bringing in an altimeter and LTE, though the latter isn’t available in India yet. Starting at Rs. 29,900 for the 38mm model with Aluminium Case and Sport Band (the one pictured above is the Anthracite/ Black Nike Sport Band) and Rs. 31,900 for the 42mm equivalent, the Series 3 Apple Watch isn’t exactly cheap, but the launch prices are lower than that of the previous generation. As with earlier models, you will need to have an iPhone to set up and use the Apple Watch.

If you lead an active lifestyle and fitness-focussed features are the main attraction, the latest Apple Watch is a great pick. Apple also still officially sells the slightly less expensive (but slower) Series 1, but you would miss out on features like GPS, altimeter, water resistance, and Siri that talks, so you are better off buying the latest model if you can afford it.

Tech Companies Must Prune Privacy Policies for Users: Government
Bitcoin Is at an All-Time High. Should You Invest in It Now?