The original Apple Watch did feel like it was trying to please too many people at once. There weren't enough compelling reasons to own one, and that was not good for Apple. Somewhere along the way Apple seems to have realised that the Apple Watch holds tremendous value for those into fitness, and so the company has done well to target this market with Series 2.

The second iteration of Apple's wearable has a clear identity - it wants to be the only fitness tracker iPhone users will need. All other reasons to own an Apple Watch Series 2 feel secondary if one considers its headline features - GPS, and the ability to be worn while swimming. This new device will appeals strongly to athletes, and we used it for two weeks while training for a half-marathon to see if it lives up to its billing. 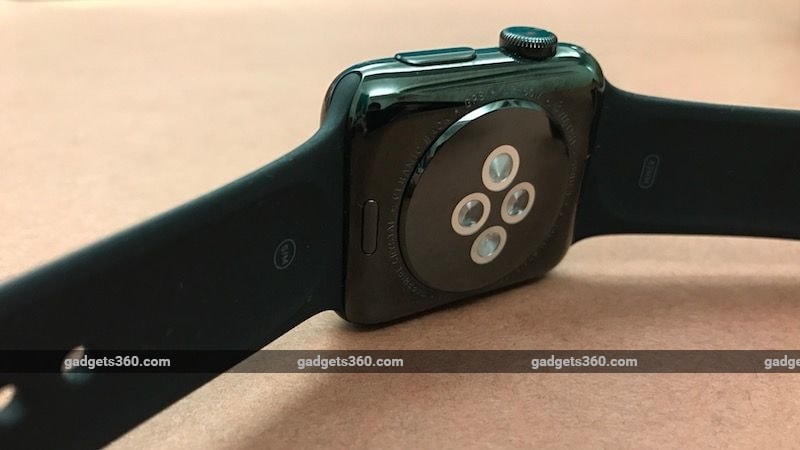 When we were ready for our first run, we were surprised to see that the Series 2 started a 3-second countdown as soon as we tapped Start. Most running watches take around 60 seconds to latch on to a GPS signal and some of them cache locations to speed up the process. With Apple Watch Series 2, this is a non-issue. It was ready to log runs instantly, no matter where we were - and that's a big plus. However, there's no indicator on screen to show that GPS is active. We think that could be a useful addition just to assure people that the device is doing what it should.

We wore a TomTom Spark on one hand and Apple Watch Series 2 on the other during most of our runs to establish a point of reference. We also did a speed run on a slightly unconventional 340-metre track to measure the distance recorded by the GPS against a mile marker. We didn't compare the results of our first run with the Apple Watch because it uses that for calibration, and then provides more accurate data based on your stride length among other factors.

The first test run was for 10km along a lakeside road, with a stretch under trees. The TomTom watch recorded 10.77km in 1:04:00, while the Apple Watch recorded 10.73km in 1:03:40. The small difference in time is because we started recording on the TomTom Spark earlier. If you ignore that, the data is almost identical. Both watches recorded an average heart rate of 180bpm.

Most of our test runs produced similar results. We noticed a deviation of around 60m (3.66km on Apple Watch against 3.72km on the TomTom Spark) once, but we did pause that run in between and the difference could be attributed to us resuming it on the Spark before the Apple Watch. The test run on the 340m track revealed a bigger difference in the data recorded by the two watches: the Apple Watch logged it as 8.5km in 1:05:00 while the TomTom Spark recorded it as 8.73km in 1:05:10. This was a speed run involving 9 sprints of 200m each and we hit the distance at the same time on both watches. This was the most significant deviation we noted in the data recorded over the two-week period, and it might have crept in during our slow warmup and cool down runs, or in the rest periods between each sprint.

We really missed having an always-on display on the Apple Watch Series 2. During speed runs, it's nice to have your run data available at a glance. The TomTom Spark provides this, but with Apple Watch, we had to wait about half a second longer for the display to turn on and show us anything useful. The raise to wake feature works perfectly - it always turns the display on as soon as the watch's screen faces you - but it still is a bit too slow for speed runs. For tempo and long runs, we didn't miss this functionality as much, but in general it's something runners would prefer to have.

The Apple Watch Series 2 has a great touchscreen. It's very bright and perfectly legible under sunlight, but we're not convinced about this being the best way to operate a watch while running. When your fingers are sweaty or when you're running in the rain, operating the touchscreen becomes slightly difficult. Thankfully one of the watch's physical buttons lets you pause runs and it even has an auto-pause feature that kicks in when you stop moving. You can sync Apple Music songs to the watch and play them via Bluetooth headphones. So can you leave your iPhone at home during runs? Only if you don't care about elevation data. The Apple Watch Series 2 doesn't have an altimeter so it won't be able to record elevation changes unless you carry your iPhone with you. For serious runners, that's a major omission.

Software and ecosystem
The Workouts app could use a few improvements. We found a bug that hides all of your run data if you hit the "digital crown" controller and the power button at the same time. After that, run data appears on screen only if you start a new run. The app doesn't let you export your runs to other services either. With the TomTom Spark and competing products from Garmin, you can automatically export run data to multiple services such as Strava and Runkeeper. Workouts also lacks modes for training runs. For instance, you can't configure the app to let you run 2km slowly, followed by a 200m sprint, then 4 minutes of rest, then a 200m sprint, and so on. You can only set goals by calorie count, time, or distance, which is barebones compared to what running watches offer.

Apart from Workouts, Nike+ Run Club is the only app that currently supports GPS on the Apple Watch Series 2, so you'll find yourself restricted to these two choices. RunKeeper is planning an update to add native GPS functionality soon, while Strava and Runtastic users will probably have to wait a bit longer. If Apple allowed you to export data, you could send it to all such services in one go. Most people will have a few running buddies on each platform and this would be a way to share run data with them all.

That said, most people who use running watches will definitely appreciate the fact that Apple Watch Series 2 automatically syncs runs with the Activity app on the iPhone. Most low-cost wearables require you to sync data manually, but even the ones that cost upwards of Rs. 30,000 aren't nearly as good as the Apple Watch Series 2 at non-fitness related tasks.

With watchOS 3, Apple has finally shipped a relatively fast and stable platform for its smartwatches. We've used watchOS 3 on a first-generation Apple Watch as well as the Series 2, and it's definitely snappier on the latter, which is no surprise give the beefed-up hardware. Apps now open quickly and switching between them is very easy thanks to the Dock. We found ourselves dismissing useless or less important notifications without touching our iPhone. The Scribble feature in Messages helped us draft plenty of quick replies by simply scribbling one character at a time. That's extremely useful when you're in crowded public transport and don't want to pull your iPhone out. 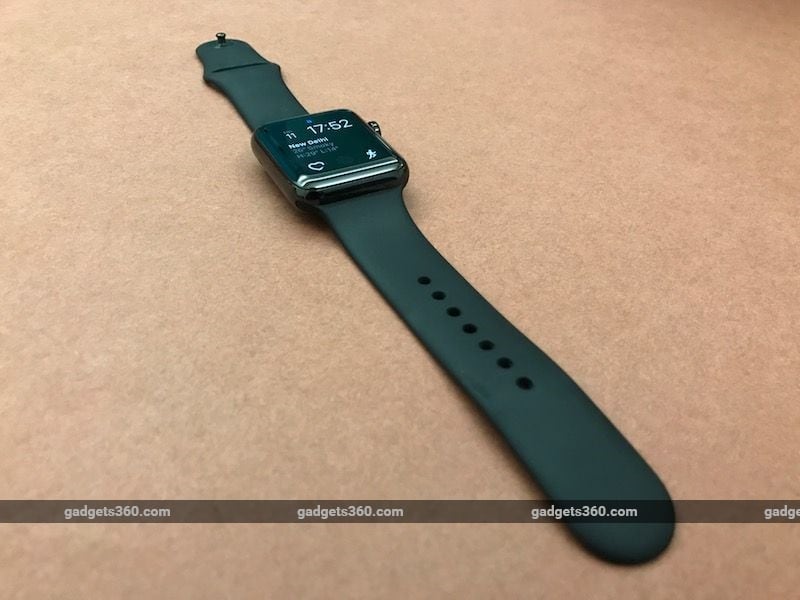 Apps such as Authy let us check two-factor authentication codes on the watch, which was yet another reason not to check our iPhone 7 too often. Calls aside, we found ourselves getting through entire work days without using the iPhone itself. Playing podcasts and music, checking emails, handling messages, and pretty much every task we have in our daily workflow could be done on the Apple Watch or our MacBook Air, which is an impressive achievement for Apple's ecosystem as a whole. watchOS gets a big boost thanks to the number of apps now available, and the fact that most of the apps we used worked well.

Watch Unlock is the one feature that we absolutely fell in love with. We saw a pop-up on the MacBook asking if we wanted to enable Watch Unlock, and a few clicks later we were able to dispense with our password entirely. Whenever you're near the MacBook while wearing the Apple Watch, it'll automatically unlock the Mac for you. It's as convenient as unlocking an iPhone using Touch ID. The best thing is that all of these new software features work with all iterations of Apple Watch, not just the Series 2 models.

The way watchOS 3 arranges icons on its home screen is one thing that feels dated. The circular pattern makes them hard to access and we hope this changes in future versions of watchOS.

Performance and verdict
One of the biggest improvements to the Apple Watch Series 2 is battery life. Thankfully, GPS doesn't drain too much of the watch's battery. We noticed that hour-long runs usually consumed around 6-8 percent of battery power. The watch easily lasted two days on a single charge and sometimes a little more than that. We never found ourselves worrying about battery life. While we didn't wear the watch during races, we think it should suit those training for full marathons. Anything longer than that and the Apple Watch Series 2's battery life could be a stumbling block.

If you're looking for an all-purpose fitness watch to complement your iPhone, Apple Watch Series 2 is exactly what you need. It starts at Rs. 32,900 and is definitely quite expensive for what it offers. You could buy yourself a dedicated runners' wearable such as the TomTom Spark or Garmin Forerunner 235 for less and get better battery life and features for different kinds of training runs, but the tradeoffs would be the loss of automatic syncing and deep integration with your iPhone and other Apple gadgets. If you can live without integrated GPS and don't plan on swimming much, you can go for the revised Apple Watch Series 1, which now starts at Rs. 23,900 and offers good value for those who use an iPhone while exercising.

product Is the Apple Watch Series 2 the perfect smartwatch for serious fitness enthusiasts? We find out. 4 out of 5 stars