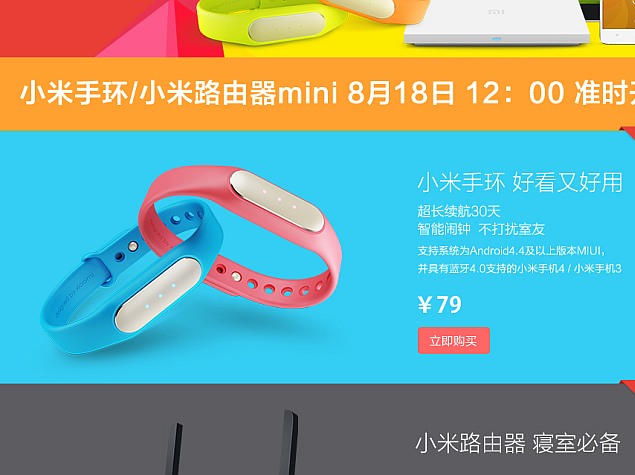 Amidst the Mi 3 flash sale hype in India, Xiaomi on Wednesday unveiled the release date of its Mi Band as August 18.

The Xiaomi Mi Band is a wristband fitness tracker that was introduced last month. The fitness band by the Chinese smartphone maker is priced aggressively at $13 (roughly Rs. 790).

The announcement came via a dedicated webpage on Xiaomi's Tmall China website - indicating China availability on that date. Global availability details are still not known.

The Xiaomi Mi Band, like most existing wearable devices in the market, focuses on users' health by helping them track their fitness and sleeping routines. The fitness tracking band also features Bluetooth wireless connectivity to pair with smartphones.

Boasting of an aluminium surface with a micro laser perforation, the Xiaomi Mi Band is water resistant (IP67) and has a standby life of 30 days. Once paired with the smartphone, the Mi Band can be used to unlock the user's smartphone without typing any password or patterns. The Mi Band will be available in range of colour variants including Blue, Pink, Brown, Black, Purple and Grey.

Xiaomi seems to be performing extremely well in India with the Mi 3 (Review | Pictures) smartphone. The Chinese smartphone maker claimed that it sold 20,000 units of its Mi 3 handset in 2.4 seconds as a part of the flash sales in India via an e-commerce website, Flipkart.