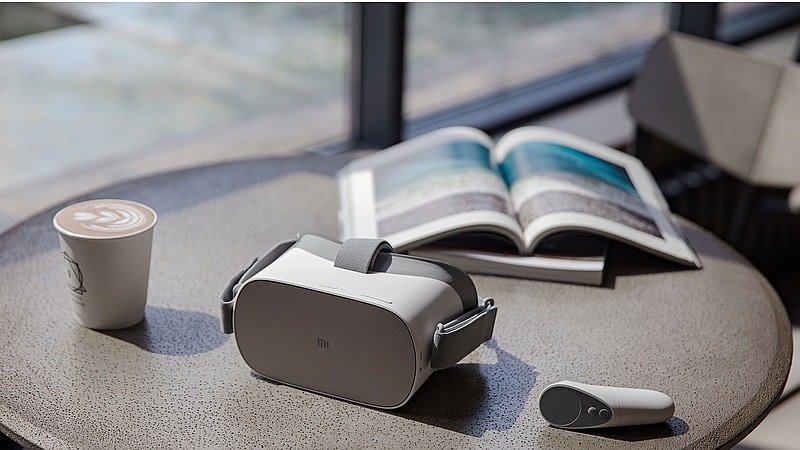 Xiaomi Mi VR Standalone virtual reality headset was launched on Thursday at Xiaomi's annual launch event in Shenzhen, China. The event also saw the launch of the Mi 8, the Mi 8 Explorer Edition, Mi 8 SE, Mi Band 3, and MIUI 10 operating system. The Mi VR Standalone headset was built in collaboration with Facebook-owned Oculus, and is the next step in the Chinese company's partnership with Oculus after it manufactured the Oculus Go headset for it. The Mi VR Standalone headset has been priced starting CNY 1,499 (roughly Rs. 15,800) for the 32GB inbuilt storage version, and it is already up for pre-orders in the country.

The Xiaomi Mi VR Standalone headset is powered by the Qualcomm Snapdragon 821 SoC coupled with 3GB of RAM, and features a 2560x1440 pixels display Fast Switch LCD that supports 60Hz and 72Hz refresh rates - the higher refresh rates help reduce latency, the company added. It features a specially-modulated diffractive optical system, with Fresnel lenses designed by Oculus. It bears 32GB or 64GB of inbuilt storage. Sensors on board include a distance sensor and inertial sensor. The headset support 3DoF (degrees of freedom) and features a neck displacement solution.

Xiaomi says the headset has been designed for 'Asians', and says it will fit comfortably on faces. It weighs 425 grams without straps. Xiaomi is touting the availability of more than 100 games via the Oculus store. Finally, the company adds that Mi VR Standalone headset has built-in panoramic near-field headphones capable of delivering 360-degree surround sound.

The Mi VR Standalone headset also bears Wi-Fi 802.11ac connectivity, and is charged by a Micro-USB (v2.0) port. It ships with a motion-sensitive controller, weighing 40 grams, and bears an inertial sensor apart from supporting 3DoF. It has a home key, back key, touch panel, and trigger key.

Nokia Completes Sale of Its Withings Digital Health Venture Back to Co-Founder
Jio Recharges Now With Extra Rs. 50 Cashback: How to Avail the Offer