Sony has announced the addition of two new wearables - the SmartBand Talk and SmartWatch 3 - to the company's SmartWear Experience range.

Notably, both the Sony SmartBand Talk and SmartWatch 3 work with Lifelog, the accompanying app for the wearables. The company touts that the "SmartBand Talk is a powerful lifelogger, bringing call handling and voice control from your wrist, with an always-on curved 1.4-inch e-paper display."

The highlight of the SmartBand Talk is its curved and always-on 1.4-inch e-paper display, which the company claims is low-power consuming despite being highly visible and clear. The screen on the SmartBand Talk offers users Lifelog activity, notifications and the time at a glance. The company has also confirmed collaborations with brands like Roxy to bring limited edition SmartWear styles to market later this year.

The company revealed that the voice control feature in the SmartBand Talk will initially support Japanese, UK and US English, French, German, Italian and Spanish.

Much like Sony's other devices, the SmartBand Talk is also a waterproof device and comes with IP68 certification and will be initially available in Black and White colours. Meanwhile the company notes that more colours will be released available later in the year - so something for everyone, whether blending in with your work clothes or a fun accessory to a casual outfit, allowing you to express your individual style.

The SmartWatch 3, on the other hand, is the company's upgraded smartwatch that the Japanese manufacturer claimed has been specifically designed for the new Android Wear update. 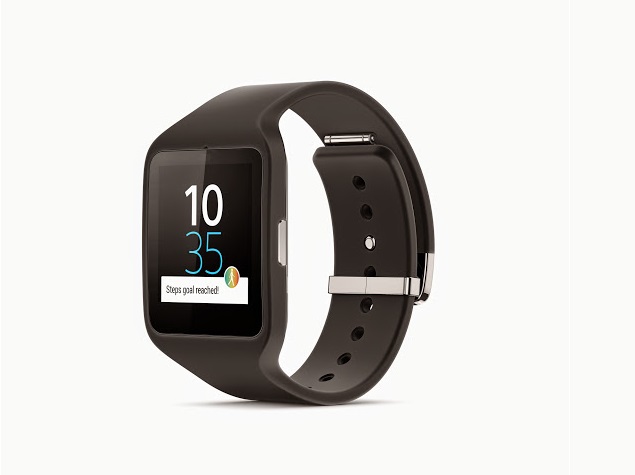 It comes with built-in accelerometer, compass, gyroscope and GPS sensor. The SmartWatch 3 sports a 1.6-inch (320x320 pixels) display, set within a stainless steel core and is waterproof with IP68 certification. The new smartwatch from Sony will be available in Classic (black) and Sport (lime) editions, with extra colour straps available in pink and white. The device also includes built-in 4GB storage and can connect with a Bluetooth headset.

Commenting on the launch, Kunimasa Suzuki, President and CEO, Sony Mobile Communications said, "Life is a journey, and journeys are made up of stories and experiences that define you - this is the underlying principle for Lifelog, the Android app at the heart of our SmartWear Experience. We're going beyond mere fitness tracking and number crunching, to help you log and preserve those emotional moments that matter. As a pioneer of smart and wearable technology, SmartBand Talk, SmartWatch 3 and Lifelog don't merely affirm Sony's leadership in the space, but as the innovators who dare to be different - bringing the world choice; products and services no else can, or will."