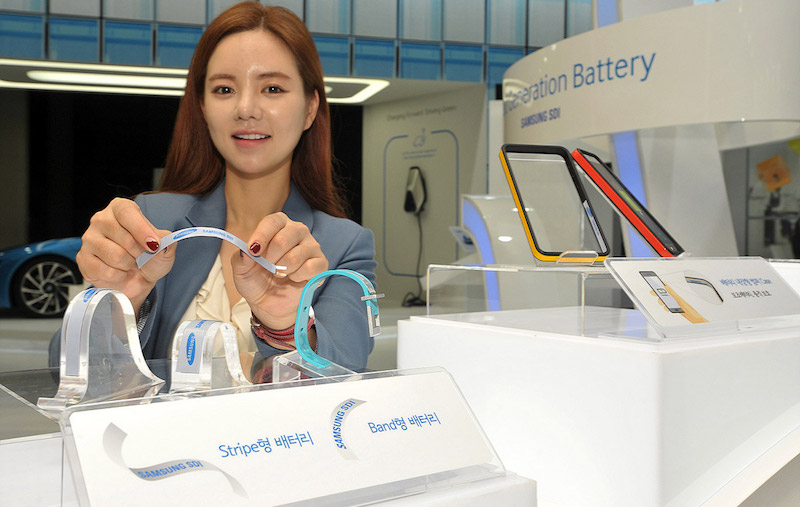 At the InterBattery 2015 exhibition in Seoul, South Korea, Samsung and LG unveiled prototypes of new batteries that could shape the future of wearable devicess and set a new benchmark for other companies to follow.

Samsung showcased "band-shaped" batteries that are flexible. Dubbed "Stripe" and "Band", the company claims that these batteries will have a range of applications for wearable devices such as usage in T-shirts, and barrettes. The Band, as the name suggests, has been developed to be attached to smartwatch straps, while the Stripe is a bendy strip with an ultra-slim waistline of 0.3mm.

The design in the aforementioned cells improves the battery life by up to 50 percent, Samsung claims. But its capacity isn't sufficient to make it fit for use in smartphones and smartwatches yet, the company noted.

As for its durability, the company has managed to mould the batteries to the curvature of the human wrist and noted that the batteries were able to withstand 50,000 bends in test conditions.

At the event, LG also showcased a flexible battery. Dubbed the "wire battery," the cells can be made to bend into a circle of 15-mm radius, which the company claims, is twice as efficient than a typical battery in its range. Its wire-shaped body also makes it fit for use in wearables.

The batteries are not conceptual, and will be available in the market eventually. An LG representative said that the company has been working on the wire battery since 2013. Samsung hopes that it will be able to deploy the new batteries for commercial applications by as early as 2017.