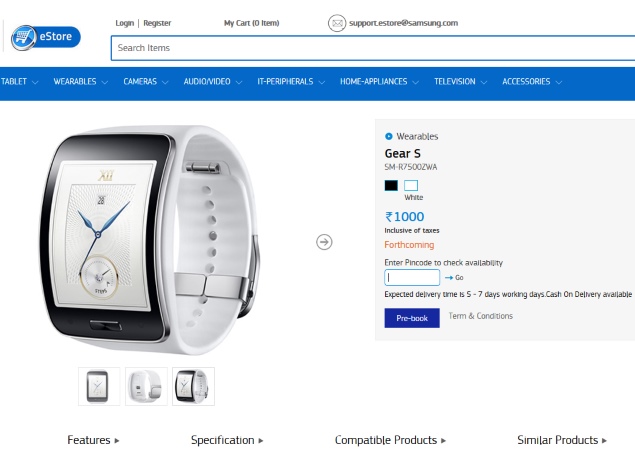 Samsung's recently launched Tizen-based Gear S smartwatch has gone up for pre-orders in India via the company's online store, with a booking amount of Rs. 1,000.

While the company did not include availability details, it notes that the expected delivery time for the 'Forthcoming' Gear S is 5 to 7 working days.

The South Korean giant had first unveiled ahead of IFA 2014. The Gear S smartwatch was announced for India last month at Rs. 29,500 (MRP), and Samsung estimates a market operating price of Rs. 28,900.

The Samsung Gear S allows users to make and receive calls via 2G or 3G, and also offers Bluetooth 4.1 and Wi-Fi connectivity. It has a separate slot for a SIM card on the back panel along with the heart rate sensor and four pogo pins.

Samsung says the smartwatch will always remain connected, and can also switch between multiple networks to stay synchronised with the paired smartphone. However, to be precise, the Gear S smartwatch is not truly standalone, as it requires one of 20 Samsung smartphones during initial setup, and to download apps.

(Also see: Web Browsing on Your Wrist: Is This What a Smartwatch Is For?)

In September, Samsung, in partnership with Diesel Black Gold, which is a premium line of the Diesel brand, had revealed that the new Samsung Gear S custom accessories will be launched at the runway of the Diesel's Spring/Summer 2015 show.
Comments