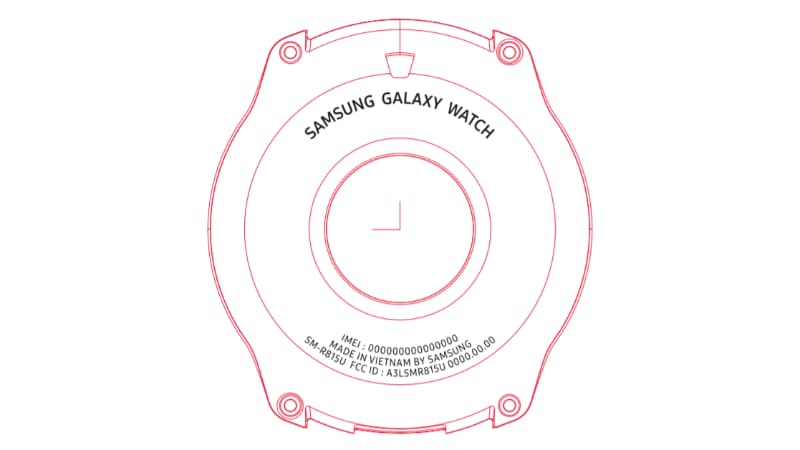 Samsung Galaxy Watch has now received an FCC certification with model number SM-R815. This unannounced model is apparently the LTE variant of the Galaxy Watch. The latest listing also reveals that the new smartwatch features a 30.2mm display that is 1.19-inch and includes a wireless charging cradle. Previous reports have claimed that Samsung is set to launch the next-generation smartwatch model will be launched alongside the Galaxy Note 9 and Galaxy Tab S4 on August 9. The watch is said to run Tizen 4.0 out-of-the-box, though an initial rumour rumoured that there will be Google's Wear OS.

As per the FCC listing, spotted by SamMobile, the purported Galaxy Watch model sports a 1.19-inch display. This is smaller in size over the 1.3-inch display of the Gear S3 Classic and Frontier but matches the 1.2-inch of the Gear Sport. The model that has been listed carries model number SM-R815. However, Samsung is in the rumours for preparing the model number SM-R800, SM-R805, and SM-R810 as well. This hints at multiple variants of the Galaxy Watch. Also, as SamMobile points out, it is safe to say that the other variants might have different display sizes as well.

The FCC listing additionally details that there is the supplied adapter ETA0U60JBE as well as wireless charging cradle EP-YO805 and USB data cable ECB-DU2EBE. The LTE variant also supports 4G bands 2, 4, 5, 12, 13, 25, 26, and 66. Further, there is Wi-Fi 802.11 b/g/n and Bluetooth 4.2 LE. Moreover, since the FCC website is showing July 18 as the published date of the listing, we can easily expect its arrival at the forthcoming Galaxy Unpacked event that is taking place in New York on August 9.

If we believe some previous reports, the Galaxy Watch will run Tizen 4.0 and offer Bixby integration. It is also reported that the new smartwatch will come with some healthcare features and "killer apps" focused on fitness features. All these developments could make the Galaxy Watch a strong competitor against Apple Watch.