Pebble on Wednesday introduced three new limited edition colours for its existing Pebble smartwatch. Priced at the same $150 (approximately Rs. 9,000), the Pebble smartwatch is now available (until stocks last) in Fly Blue, Fresh Green, and Hot Pink, along with the existing options, from the company's official website.

The Pebble Limited Edition smartwatch comes with matching colour bands, but users have the option to customise them too. Other than the new colours, Pebble also announced two new watchfaces for the Pebble appstore soon - a new weather watchface by The Weather Channel, and an animated Reading Rainbow watchface featuring an 8-bit Levar Burton.

The Pebble appstore for smartwatches went live for iOS users in February, and for Android users in March. 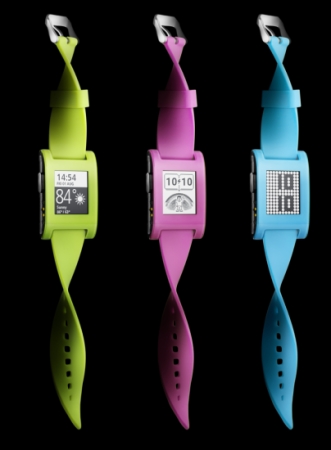 The Pebble smartwatch, which started out as a Kickstarter project, was developed by young Canadian inventor Eric Migicovsky who couldn't find conventional funding to make the watch. It raised $10.3 million by pre-selling 85,000 Pebbles. The watch entered mass production in January 2013.

Notably, the company started shipping the Pebble smartwatch globally last year. The company also reported that it has sold 190,000 Pebbles worldwide, with users downloading 2 million apps and watchfaces. It had also informed that more than 50 companion apps are available for Pebble on the App Store and Google Play with more than 10,000 developers working on them.

(Also see: Samsung, Pebble Account for 96 Percent of Smartwatch Sales in the US: NPD)