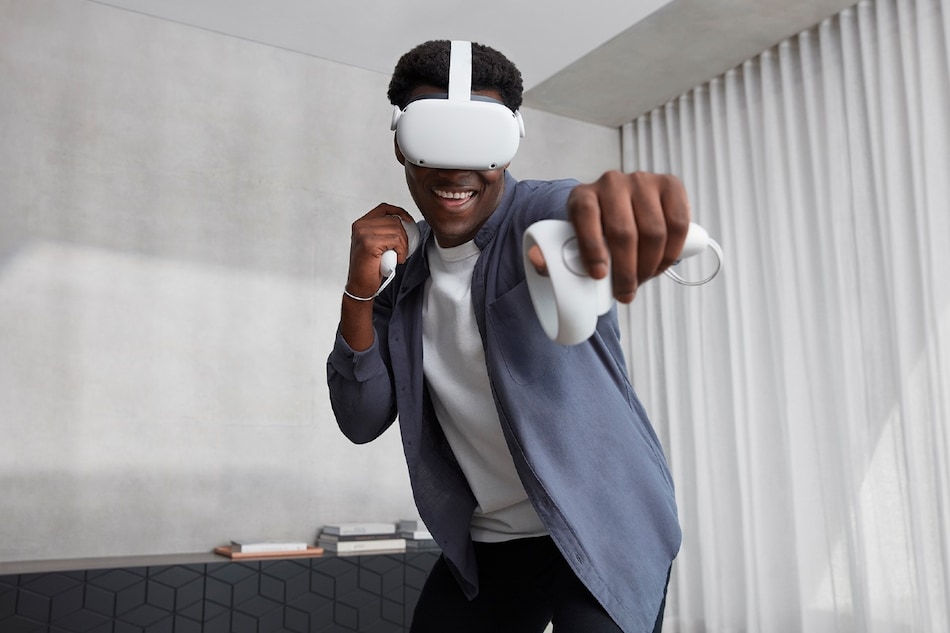 Facebook at the Connect virtual conference has unveiled Oculus Quest 2 as its next-generation standalone virtual reality (VR) headset. The new offering, which is the successor to the Oculus Quest, is touted to offer the “highest resolution display ever” in the lineup along with a weight lesser than its predecessor. Oculus Quest 2 will be the first headset to use a Qualcomm Snapdragon XR2 SoC. This is a major upgrade over the Oculus Quest that had Qualcomm's Snapdragon 835. Alongside the launch of Oculus Quest 2, Facebook has announced that it is discontinuing the PC-only VR headset Rift S that debuted in March last year.

As an upgrade to the original Quest headset, Oculus Quest 2 comes with an improved design that has a soft cloth head strap over the earlier rubber strap. The controller tracking has also been optimised to deliver enhanced battery life that is touted to be four times longer than what you'd get with the original Quest's Touch controllers.

In terms of specifications, the Oculus Quest 2 features a new display with 1,832x1,920 pixels resolution and 90Hz refresh rate. The display also has 50 percent additional pixels over the original Quest. Oculus is also in plans to open up 90Hz support to all developers soon after the launch of the headset. However, the current software supports 72Hz rate.

The Quest 2 is powered by the Qualcomm Snapdragon XR2 SoC, paired with 6GB of RAM. There are also the new Touch controllers with the optimisations for battery efficiency. The Oculus has additionally provided a built-in interpupillary distance (IPD) adjustment mechanism with three settings to let users adjust lens position as per their preference. Furthermore, the headset weighs 503 grams, which is lighter than the 571 grams Quest.

Alongside the new headset, Facebook's Oculus is discontinuing the PC VR headset option Rift S from 2021 and that would eventually be replaced with the Quest 2. The company, however, says that users would continue to get the PR VR gaming experience through the new headset via the Link USB Type-C cable that is priced at $79 (roughly Rs. 5,800). It essentially allows you to connect the Quest 2 headset with your desktop.

Oculus has also announced that it will end the sales of the original Quest as Quest 2 will take its place next month.

“Our goal with the original Quest was to bring standalone VR to as many people as possible. We're doubling down on that goal with Quest 2. It combines the performance gamers want with the flexibility people need, all at a price significantly lower than similarly featured headsets on the market. Quest 2 is more than just the next step in all-in-one VR,” the company said in a blog post.

Oculus has announced titles including Star Wars: Tales from the Galaxy's Edge, Myst, Jurassic World Aftermath, Warhammer 40,000 Battle Sister, Pistol Whip: 2089, The Climb 2, and Rez Infinite that all will be compatible with the Quest 2. Further, an Elite Strap with Battery and Carrying Case as well as a Fit Pack have been launched as the two useful accessories for the new offering.