Just when you thought there was no way to make Google Glass any geekier, here is a new app that lets you control the smart eyewear using the only power of your mind - and also Neurosky's EEG biosensor. The biosensor wraps around one side of your head and has a contact point with your temple, and is used to measure brain activity, by monitoring changes in your brainwaves.

What that means is that you can use it as an input device, and London-based developers This Place have made an app called MindRDR, which allows you to control Google Glass with your mind. So instead of saying "OK Google, take a photo", you could instead... stare intently while thinking of taking a photograph?

The company has made a video that shows how the combination of the Neurosky EEG biosensor and Google Glass works. It shows some different scenarios where a brain-powered head mounted computer could be useful, which you can see here:

There are some scenarios where a setup like this could actually make a big difference - such as for people with disabilities. This Place, on its website, gives the example of Professor Stephen Hawking, who cannot use either the touch panel on the side of Google Glass, or voice commands. Within the niche of people who have conditions like quadriplegia it is possible to see the value of this app.

There's also the fact that the app is fairly limited right now. All it can do is take a picture, and then upload it to Twitter or Facebook, depending on your settings. When you launch the app, it shows a white line on the screen. Concentrate on that line, and the EEG sensor will measure your brain waves - if it detects the concentration, the line will rise up. Concentrate for long enough and you take a photo. Once you've taken the photo, you'll see the white line again, and if you concentrate and raise it this time, then you'll have uploaded the picture.

Of course, this is more a proof of concept than an actual final product, and if there is more interest in the app, then the developers can add more functionality.

Aside from that, the other problem is that using EEG as an input method has not been particularly successful. Neurosky's sensors have been used for gaming demos and released as toys for years - you can buy the Neurosky Brainwave, which includes the actual sensor and a software package that includes games, meditation programmes, and attention trainers, for $99.99 on Amazon. 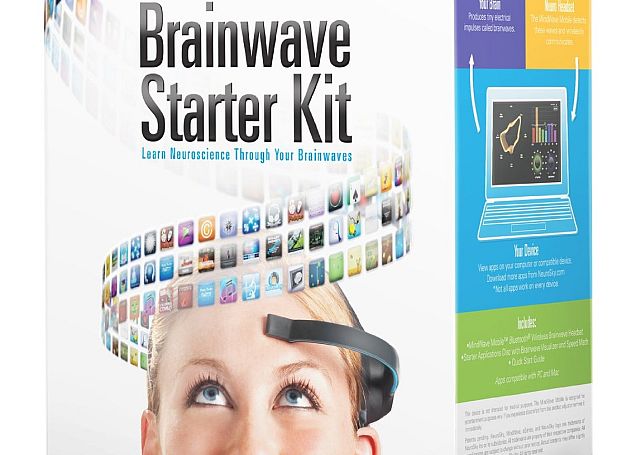 But when you read about hands-on experiences for tasks such as gaming, where you need a wide degree of control, most people have reported that it works, but it's a lot less effective than any other method of control. It's also something that you need to learn to do - with game demos at least, as you spend more time using the software, you get better at understanding how to control it, but most people report a steep learning curve.

And of course, there's the question of cost, since it's unlikely that most people will have a $100 EEG sensor lying around in the house. It's not a very high price, certainly, and again, for people who genuinely need something like this, it shouldn't be a big issue. But for the rest of the market, it will certainly be another stumbling block.

Within a highly specific role, the MindRDR application still sounds amazing, but if you're worried about hordes of telepathic geeks, wearing multiple headsets and slyly Tweeting everything they see, then... we have a little time yet.