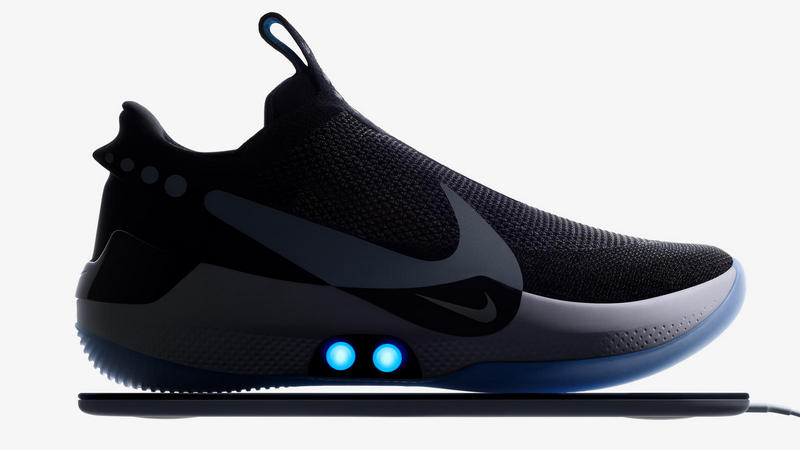 Nike has found a new way to capture more information about its customers: through their sneakers.

At an event Tuesday called the "Future of Footwear," Nike on Tuesday unveiled a new shoe concept, called Nike Adapt, that tracks performance in real time, allowing the company to give weekend warriors athletic tips and also sell them more products.

"It's the start of a new day," said Michael Donaghu, Nike's director of global footwear innovation. "It's like we're moving from footwear to firmwear."

The shoes, with their data-tracking capability, present customers with a choice about privacy -- if they opt not to share their data, they'll miss out on a lot of the product's capabilities. The company is starting with basketball shoes, which will sell for $350 (roughly Rs. 25,000).

The shoe self-tightens to an athlete's preference - there are no laces - and is adjustable via an app. The products carry sensors, accelerometers and gyroscopes that can give Nike a full, personalized snapshot of its owner's performance. They'll need recharging every two weeks.

"It's like having two smartphones strapped to your two feet," said Michael Martin, Nike's global head of digital products.

CEO Mark Parker discussed the new shoes in vague terms in December, calling it a "major step" in taking Nike's new digital emphasis and embedding it into actual product.

Nike stores are also going digital. The company calls new flagship locations unveiled two months ago in New York and Shanghai "Houses of Innovation." They blend online shopping with the in-person experience. To get the full experience, you essentially have to download the Nike app.

Nike is in the midst of a digital transformation. A large part of that is trying to get more of its customers to become members of the NikePlus loyalty program. The company has found members spend three times more than nonmembers when they shop at Nike.com.

Though Nike has seen rapid growth in apparel sales, shoes still accounted for 61 percent of the company's $36.4 billion in revenue last fiscal year.

Nike auto-lacing shoes have been around since 2017, when the company sold a limited number of low-top sneakers for $720, the most expensive shoes it ever released. These shoes will be available through Nike's direct channels, and through retailers, and will debut in the NBA on the feet of Boston Celtics forward Jayson Tatum later this week.

The shoe's technology is can be updated through the app, meaning its capabilities can change after it's purchased. The Beaverton, Oregon-based company plans to release more products with the Adapt technology, including running shoes, sportswear and lifestyle items.

"The advantages we're looking to provide the athlete are so substantial that you'll see a mass of people wanting to make use of those benefits," Martin said.