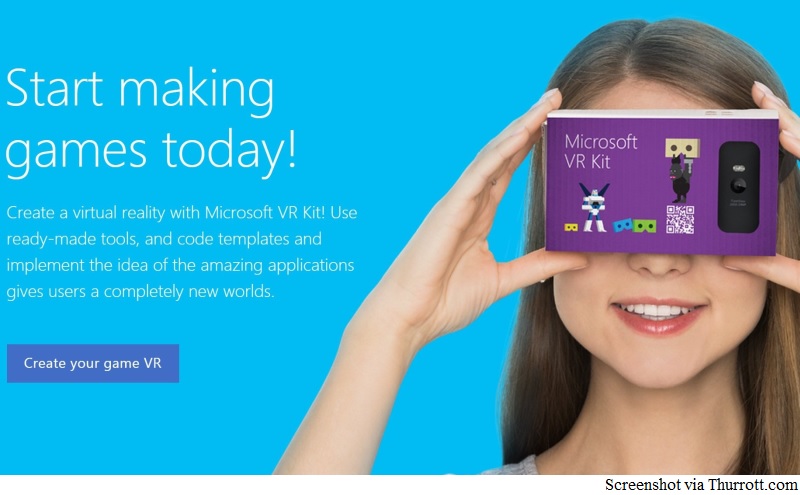 Cheap and easy-to-use virtual reality gets another boost as after the low-cost Google Cardboard VR headset for mobile phones, there's now also a similar headset from Microsoft, according to a report.

As reported by Thurrott.com, Microsoft is running a hackathon in Russia to attract developers into creating apps for virtual reality. The signup page for the contest has been removed since the report went up, but the site included the image above.

From the image at least, the VR Kit shown looks a lot like Google Cardboard - it's a far cry from HoloLens, an augmented reality headset that Microsoft has been working on - but given the growing interest in virtual reality, it perhaps makes sense that Microsoft might also want to have some apps in place on its platform. Given how simple the Cardboard is - and how simple the VR Kit looks - it is even possible that the headsets will be interchangeable, which would be another reason for Microsoft to get apps in place quickly, since cheap Cardboard headsets are readily available, and this could lead to Android getting a huge head start in a whole new category of apps if left unchecked.

According to the report, Microsoft is planning to hold the hackathon on October 17 with three categories - games, education, and corporate apps. Could this be the first step towards something more elaborate, like the Samsung Gear VR? That $99 (approximately Rs. 6,500) headset is now being sold by Samsung, and was made in collaboration with Oculus, whose headset, the Oculus Rift triggered the current interest in virtual reality technology, with new headsets coming from Sony (Project Morpheus, now PlayStation VR), HTC (Vive), as well as Microsoft's own fairly unique take, the HoloLens.

We're seeing a lot of content being developed for virtual reality as well; there are already simple apps offering experiences such as roller coasters rides and concerts, while Oculus is working on VR movies, and others are trying to create VR graphic novels. It makes sense that Microsoft would not want to be left behind again on an entirely new category of apps, but we'll probably have a better idea of what its plans are, next month.