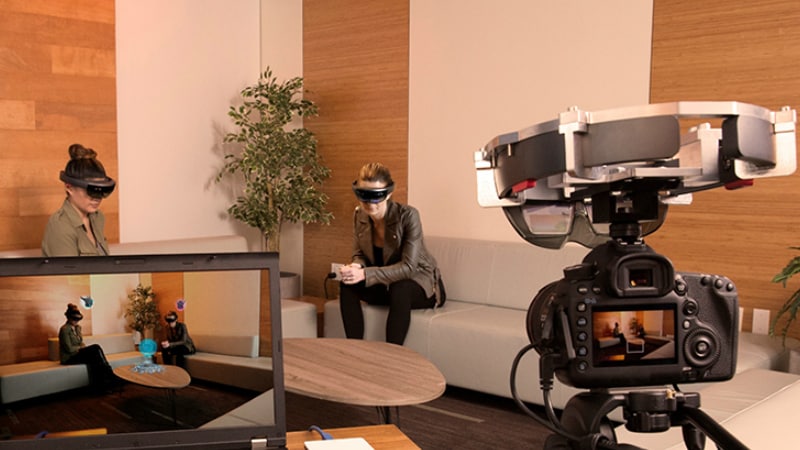 Microsoft unveiled its one-of-a-kind HoloLens mixed reality headset in January 2015, and while there was a lot of interest around the headset, there's still a very small community that uses it. While the world with the HoloLens headset on is a magical one, with 3D drawn images and floating Web browsers - the other people in the room not wearing a headset experience nothing.

Now, the company recently demoed a hack that looks to change that. The Verge reports that Microsoft has introduced a rig that allows you to capture a HoleLens video for sharing and better understanding of what happens inside the augmented reality headset. Microsoft is calling the rig 'Spectator View', and it requires a lot of additional hardware and software DIY before you can record the video. The entire process is published on the developers page, and it essentially lets you make an 'insider video' of sorts.

While the hack involves a lengthy process, it is still very lucrative for HoloLens app makers, as it will enable them to make videos of what their app offers on HoloLens for better understanding for their customers. The user base for HoloLens headsets is also still very small, and this hack could let users realise the potential of the headset and encourage more buying. It will allow app makers to capture photo, videos, and even do live demonstrations if required.

With VR headsets running the main stream of things in the headset industry currently, AR headsets are still finding their footing. The HoloLens is essentially a wearable Windows-running computer that allows you the ability to move around while you create 3D things around you. It lets you draw 3D objects, and shows you exactly how it will look in your environment (aka holograms). Apps literally float in your bedroom, and you can browse the Web, make video calls, and do other things, seamlessly on the go. The headset is more about solving problems, creating new products, and editing models in a 3D environment to better visualise the final product.