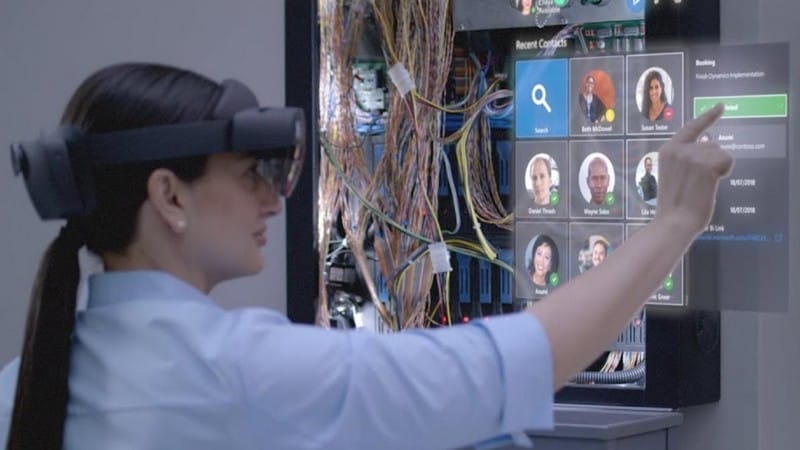 The Microsoft HoloLens 2 will feature a custom AI chip

Microsoft has scheduled an event at 6pm CET (10:30pm IST) on February 24 at MWC 2019, where the company is expected to launch the successor to its first Windows Mixed Reality headset – the HoloLens 2. But merely a few hours before the event kicks off, a set of images claiming to depict the HoloLens 2 have surfaced online. The alleged HoloLens 2 images appear to be promotional photos for Microsoft's next-generation mixed reality headset. From the leaked images, it appears that the HoloLens 2 will be slightly smaller than its predecessor and might also support aerial hand gestures.

A total of four alleged HoloLens 2 images have popped up online, shared by long-time Microsoft tipster - WalkingCat. They claim to show Microsoft's second-gen mixed reality headset flaunting a slimmer profile than its predecessor. The HoloLens 2's side frame continues all the way to the front section, while the glass display appears to have been positioned behind it. A dial-like protrusion is there on the main body just behind the display that will reportedly be used to adjust the headset.

A noticeable feature in the alleged HoloLens 2 promotional material can be gleaned from the first image in which a person is depicted interacting with a holographic display. While the original HoloLens also supported hand gestures, it did not offer a functionality that could allow users to perform tasks by actually appearing to control the holographic display's content with hand movements as if they are touching an actual screen. While it cannot be said with certainty, it appears that HoloLens 2 might well introduce a new version of gesture controls.

The leak does not reveal anything about the hardware specifications of the HoloLens 2. Back in July last year, Microsoft announced that the HoloLens 2 will come equipped with a custom AI chip that will boost the mobile processing speed and will also enhance the data security. Earlier this month, the creator of the original HoloLens teased the arrival of HoloLens 2 with a more powerful processor and wider field of view among other upgrades. We will keep you updated with official details of the HoloLens 2 once Microsoft's event kicks off.