L'Oreal Takes the Wearables War to the Beauty Counter 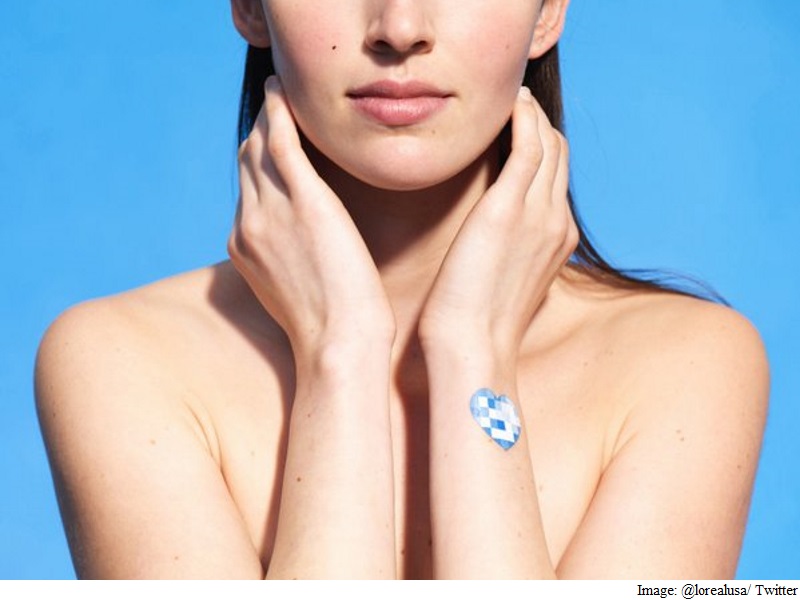 L'Oreal is not a name usually associated with International CES, the annual consumer electronics show, but Guive Balooch, global vice president of L'Oreal's Technology Incubator, was in Las Vegas on Wednesday to unveil the beauty giant's new foray into wearable tech - and it's not a bracelet (thank the heavens).

It's a temporary tattoo!

Created in conjunction with PCH, the Irish product engineering firm that also manufactures the notably wearable Ringly (the cocktail-style ring that notifies you when you get calls, text messages or calendar events), the new device is being called My UV Patch. It is a "stretchable sensor" with a diameter of one inch and thickness of 15 microns (think Band-Aid-like), containing flexible electronics that can be worn on the skin pretty much anywhere and that, with the help of your phone, can tell you how much UV exposure you are subject to at what times of day. It comes in the shape of a heart, with little blue squares that fade the more evil skin-cancer-causing rays (sorry, UV exposure) you get.

"It's a fashion statement!" Balooch said by telephone from Las Vegas, where he was making the rounds with Liam Casey, the founder and chief executive of PCH. The L'Oreal incubator is about 3 1/2 years old (it is based in New Jersey and has a sister lab, the California Research Center, in San Francisco) and it started talking to PCH about teaming up 18 months ago.

The patch, which can be worn from the shower to the beach, lasts five days and can then be peeled off and tossed in the garbage (it is environmentally safe, Balooch said). It is used with an app that will be available for iOS as well as Android devices; you scan the patch with your phone and can find out when you are at greatest risk of too much exposure, and what you might do about it.

You could also theoretically wear a few of the patches on different parts of your body to find out where you are most at risk to exposure, but that might look a little weird. Any exposed skin will do, though Balooch recommends using the patch on the back of the hand.

As to why they started with a patch, "We know from our consumer insight research that UV exposure is a big issue for people," Balooch said. "We really only wanted to make products that would disrupt the industry."

The patch is scheduled to come to market at the end of this year. At the moment, Balooch said, the plan is to give it away with products from theL'Oreal  brand La Roche-Posay, a midpriced line that is sold in 60 countries at outlets as varied as Target and Amazon. Presumably, the idea being: 1. The patch creates a halo effect around La Roche Posay; and 2. Part of the education is that people need to apply more sunscreen, which could lead to an uptick in sales, which would ultimately benefit L'OrealL'oréal Takes the Wearables War to the Beauty Counter.

"Creating something that enhances consumer experience is what drives business," Balooch said.

The patch is the first of a planned 10 or so wearable devices L'Oreal is making in partnership with PCH, and it follows the company's first foray into the tech world: Makeup Genius, a makeup testing app. Although beauty has been slower to embrace the world of wearable technology than fashion has, according to Balooch, "wearables are going to be an important part of consumer life, and that will filter down to how they think about beauty products."

And according to Casey, beauty brands have a leg up in this area over tech brands, because consumers already trust the products they make to put on their skin. The answer? Cross-industry pollination.

I have to say, on first glance, I'd never assume My UV Patch is a wearable. It's more like a cutesy body decoration. It speaks to the rise in popularity of all sorts of temporary tattoos, especially the high-end jewelry kind worn by grown-ups, which is pretty clever.

The one drawback I see is that, as a woman in middle age, I might not want to wear a heart on the back of my hand while at work. It might be the sort of talking point I don't want, and it is a little childish for my personal style - which would mitigate against one of its more potentially useful lessons: How much UV exposure we get in the course of a normal working day, when we are not thinking about sun and skin protection but rather about memos and meetings.

Indeed, when I showed the heart to my teenage daughter, she also thought it looked a little "sweet" for her taste (she liked the idea of a bull's-eye). A few other patch options - a ring? a bat? - might be useful. According to Balooch, they are in the pipeline.