Within hours of Google's I/O 2014 Keynote address on Wednesday, the new Android Wear smartwatches, the LG G watch and Samsung Gear Live were listed on the Google Play India.

The LG G Watch, initially unveiled in March, is now up for pre-order with 'Add to Cart' option at Rs. 14,999; however the listing clearly notes that the device will leave the warehouse on July 8. The Samsung Gear Live, on the other hand, is now listed on Google Play at Rs. 15,900 with a 'coming soon' tag.

One of the biggest news at I/O was Samsung joining forces with Google to launch its first Android Wear-based smartwatch, Gear Live. Notably, the other Android Wear smartwatch we know about, the Moto 360, will only be available later in the American Summer.

LG on Wednesday had revealed that its G Watch would be available for pre-order from Google Play starting June 25 in 12 countries including United States, Canada, UK, France, Germany, Italy, Spain, South Korea and Japan. List, however did not include India. Further, the company announced that the G Watch would be available soon after at retailers in 27 markets such as Australia, Brazil, Mexico, New Zealand, Singapore and Russia.

Detailing the specifications, LG said the G Watch features a 1.2GHz Qualcomm Snapdragon 400 processor, coupled with an always-on 1.65-inch IPS (280x280 pixels) display. An IP67 rating was also announced, making the G Watch dust and water resistant for up to 30 minutes in one metre of water. It will be available in Black Titan and White Gold, and can be personalized with any standard 22mm strap available in the market.

The Samsung Gear Live was seen for the first time at I/O 2014 on Wednesday, and seems to be very similar looking to the Gear 2 (Review) smartwatch launched earlier this year. 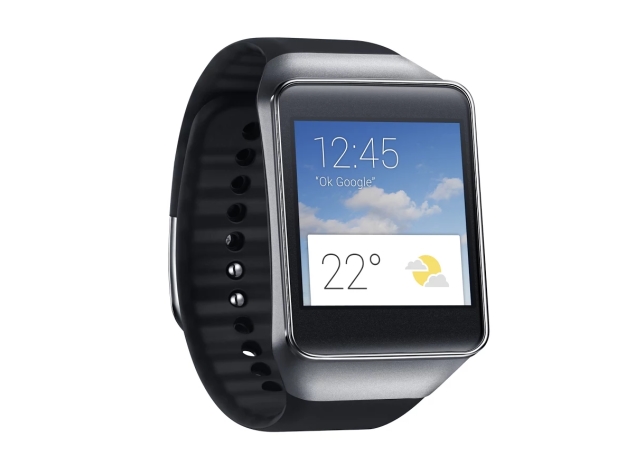 Samsung has detailed specifications, saying the Gear Live has a 1.63-inch Super AMOLED (320x320 pixels) display, runs on a 1.2GHz processor coupled with 512MB off RAM, and features 4GB of inbuilt storage, apart from Bluetooth 4.0 connectivity. It is powered by a 300mAh battery, measures 37.9x56.4x8.9mm, and weighs 59 grams.

The South Korean giant also detailed some of the features of the Gear Live smartwatch, such as the heart rate monitor, IP67 rating for dust and water-resistance, and the other sensors onboard (accelerometer, gyroscope, compass).