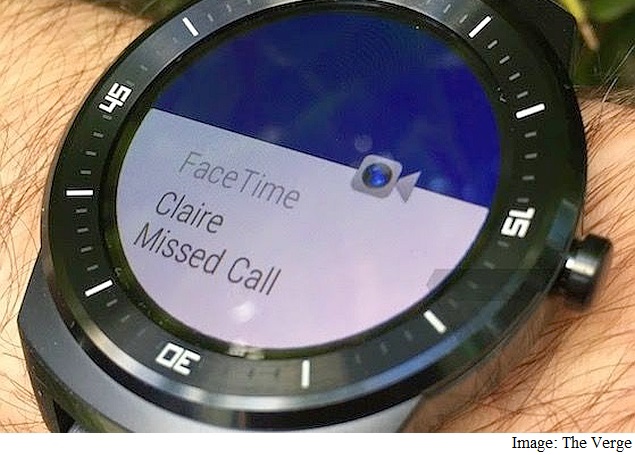 Google is "close to finishing" the final technical details for its Android Wear smartwatch companion app for iPhone, hints a report citing sources close to the development team. If it turns out to be true, Google's move would make Android Wear devices accessible by iOS device users. This might lead to Apple Watch facing direct competition from Android Wear smartwatches.

It's worth noting that Google's Android Wear smartwatch app after completion will have to get a final nod from Apple before it lands on the App Store.

The Verge reports that the companion app on the iPhone in its current development for the Android Wear allows basic functions such as notification display. The report also includes an image showing the LG G Watch R powered by Android Wear showing a FaceTime notification from an iOS device.

The report further claims that on the iPhone Android Wear app supports Google Now features such as cards, voice search, and other voice commands, similar to the Android platform.

"It should also support some more advanced features with Google's own iOS apps, like replying to Gmail messages," notes the report.

Unfortunately, Apple declined to comment on any such development; and Google told The Verge it "has nothing to announce at this time."

The report even points to a developer who recently claimed on Twitter the spotting of iOS related codes in Android 4.4 KitKat. The developer, named MohammadAG, said, "AndroidWear 4.4W (didn't check 5.0) contains iOS related code(!), class name AncsHandler. I guess that confirms they're working on it."

The report somehow is in line with an earlier report that suggested that an announcement regarding Android Wear support for iPhone and iPad devices at the Google I/O 2015 scheduled in late May.