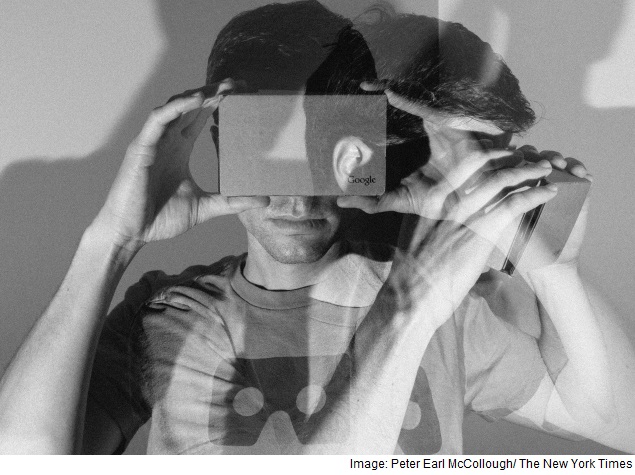 Google has seen the future, and it is littered with cardboard boxes.

At its Google I/O developer conference here Thursday, the search giant announced several programs that aim to put its virtual reality viewer, called Cardboard, at the center of a growing online world in which people can use their smartphone and YouTube to watch videos rendered in 3D.

Google introduced its virtual reality viewer - a cardboard box, with some lenses and a magnet, that looks a lot like a plastic View-Master toy - as a gift at last year's I/O conference.

The idea was to create an inexpensive virtual reality device that allowed anyone with a smartphone to do things like fly through a Google Earth map of Chicago or view personal pictures in three dimensions.

It is a comically simple contraption: A smartphone slips into the front so it sits just inches from a user's eyes. Peering through a pair of cheap, plastic lenses renders the images on the phone's screen in 3D. It costs around $4.

Typical of the Google playbook, the company put Cardboard's specifications online so hobbyists and manufacturers could build them.

In the year since, people have made viewers from foam, aluminum and walnut, and the Cardboard app was downloaded 1 million or so times.

"We wanted the viewer to be as dumb as possible and as cheap as possible because we basically wanted to open VR for everyone," said David Coz, an engineer in Google's Paris office who developed Cardboard.

At this year's I/O, Google is doubling down on Cardboard with initiatives meant to expand virtual reality to as many phones as possible. First of these is a new software kit that will make it easier for developers to build Cardboard apps for iPhones. The company also redesigned the cardboard hardware so that it is easier to fold and can now accommodate any smartphone, including popular, larger-screen, so-called phablets.

The Cardboard update is a modest offering compared with the product splashes of previous Google conferences, which have included a spherical entertainment system that was never released and Google Glass, the much hyped and now discontinued computerized eyewear that caused significant privacy concerns.

With Cardboard, Google's virtual reality is decidedly low cost and low frills, but, as in other Google efforts, like the free Android software that is the most widely used operating system in the world, it seems meant more to amass an audience than make money.

Over the last year, Google has developed a 360-degree camera that looks like a chandelier rigged with 16 GoPro video recorders, and currently has about a dozen of them filming sights around the world. When run through Google's software and processors, the footage will turn into a virtual reality rendering that tries to mimic the view from a human eye. Google said it would allow people to start uploading virtual reality videos to YouTube this summer.

During a recent demonstration at Google's Mountain View, California, campus, Clay Bavor, vice president for product management for Google's virtual reality efforts, demonstrated a video of a courtyard at the University of Washington. The video felt like an immersive version of the company's Street View mapping product that displays street-level views of city streets and historical sites.

Over time, the company is hoping this real-life version of virtual reality will grow into a vast collection of videos and experiences similar to how YouTube videos are shared now.

Google also said Thursday it had formed a partnership with GoPro to develop a version of its virtual reality recorder that anybody could buy. The companies did not list a price for the recorder, but given that it has 16 cameras that retail for $400 each, it is likely to be expensive.

Where any of this goes is anyone's guess. One might imagine videos from the front row of a concert or a television channel filming breaking news in 3D. At the same time, one might remember that Google has a history of announcing new products and initiatives that flop, like Google Glass.

And virtual reality has for decades been the next big thing that never actually happened.

Now companies like Facebook, Sony and Microsoft are placing big bets on both virtual reality, a computer-generated version of the world, as well as augmented reality, or AR, in which real-world experiences are enhanced with computer-generated images.

Analysts expect the first applications will be in video games. But in time they say virtual reality experiences could feature in everything from business meetings to doctor's appointments.

Mark Zuckerberg, Facebook's chief executive, has on several occasions said he believed virtual reality could be the next computing platform. That belief is enough to drive significant investment.

"The shift from desktop to mobile caught so many off guard and so dramatically impacted the competitive landscape, every tech and media company is going to have to be prepared for just the possibility that VR/AR will become the next platform," wrote Ben Schachter, an analyst with Macquarie Securities.

At its conference, Google also announced Google Photos, a photo app that comes with free, unlimited storage of the uncountable numbers of photos that people amass on their devices. There were new search features that allow people to do things like use their thumb to search for a restaurant in their text messages, instead of opening a new application.

In addition, the company outlined a new operating system, Brillo, that is based on Android and will allow household devices like refrigerators and thermostats to talk to one another and their owner's phone. Sundar Pichai, Google's senior vice president for products, suggested that users could use it to turn on their oven with a voice command.

Cardboard was the final act of the show, which featured a giant screen that wrapped around a San Francisco auditorium as if to mimic the experience of being immersed in a deep, three-dimensional world.

Beyond the virtual reality videos it plans on putting on YouTube, Google is also using its Cardboard device in its growing education efforts. Over the last year, the company has been running a trial called Expeditions in about 100 classrooms, in which teachers can use the viewers to take their students on a tour of world sites.

Last year, Google invested $542 million in Magic Leap, a Florida company that is developing augmented reality technology that creates imaginative images like an elephant that can fit in one's hand. And Bavor said the company had made "a significant investment" in virtual reality that goes well beyond the efforts presented at I/O.

He would not say how much money or how many full-time employees are dedicated to these efforts, but virtual reality has grown to occupy a small building on Google's sprawling Mountain View campus.

"The upshot is we are making a big investment in VR and this whole space well beyond Cardboard," Bavor said. "This reality-capture system and amazing software that powers it, that has been a yearlong investment and is just one of the many things we have brewing."