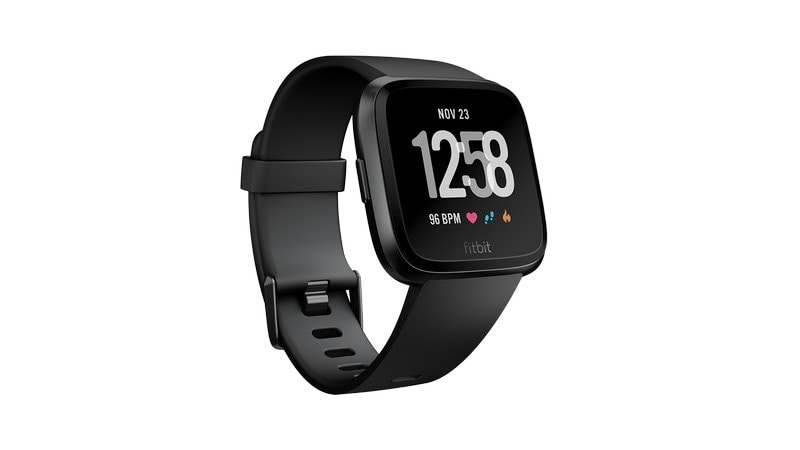 Fitbit has launched its second smartwatch, the Versa, in India, following the Ionic (Review) earlier this year. It'll be available from May 13 both online and in stores, starting at Rs. 19,999. You can get it in three different colour variants: Black strap with Black case, Grey strap with Silver case, and Peach strap with Rose Gold case. It works with Android, iOS, and Windows devices.

Alongside, Fitbit also announced that its first tracker for kids, the Ace, will be launched in India soon at Rs. 7,990. It'll be available in Electric Blue and Power Purple. The Ace is a slightly modified version of the Alta HR, and was unveiled back in March, alongside the Fitbit Versa.

The Versa will be exclusive to Amazon India online, while it'll be available in Reliance Digital, Croma, and Helios stores among other offline retailers. There's even a Versa Special Edition, which has support for NFC-based payments, and costs slightly more at Rs. 21,999. No Indian banks currently support Fitbit Pay, though. Accessories such as leather and metal straps will retail between Rs. 2,499 - Rs. 8,499.

Continuing the trend laid down by the Ionic, the Versa has a four-day battery life, which is almost unheard of in the world of colour-screen smartwatches. Fitbit recently announced quick replies on Android, and that's coming to both Ionic and Versa soon. The Versa is also waterproof and can go in the pool.

Like most Fitbit trackers, the Versa is capable of tracking steps, sleep and female health, calories burned, floors climbed, and auto activity recognition. Like the Ionic, it has a bunch of apps thanks to Fitbit OS, can store and play music, has continuous heart-rate tracking, and provide personalised on-screen coaching via Fitbit Coach.

But unlike the Ionic, the Versa doesn't have built-in GPS, so you'll need your phone around if you want a map of your exercising. What the Versa does have over the Ionic are designer accessories, so you can customise it as per your needs.