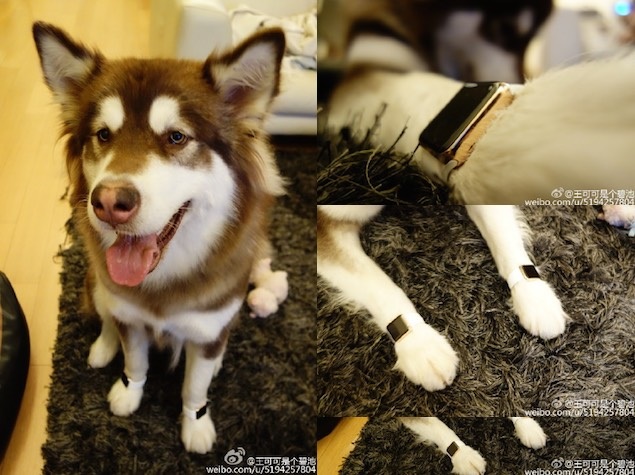 The craze around Apple's first smartwatch has reached new heights, thanks to the antics of a Chinese billionaire's son.

Wang Sicong - the son of property magnate Wang Jianlin, the man behind Dalian Wanda who's considered the richest man in mainland China - on Monday posted four photos from his dog's Weibo account that caused much consternation on the Chinese micro-blogging site.

The photos show the dog (named Wang Ke Chi Bi) wearing two Apple Watch Edition smartwatches, worth somewhere between $10,000 (roughly Rs. 6,40,000) and $17,000 (roughly Rs. 11,00,000), on her two front paws. The photos were accompanied by the caption, "I have new watches! I'm supposed to have four watches since I have four long legs. But that seems too tuhao [a Chinese word for ostentatious] so I kept it down to two, which totally fits my status. Do you have one?"

Understandably, the post saw many reactions of outrage, and comments had blown past 8,500 at the time of writing this article, ranging from people wanting to marry the dog to others saying they can't even afford one, forget two Apple Watch Editions.

Interestingly, one of the photos in an earlier post shows the dog's heart rate (beats per minute) at 59bpm, which is certainly inaccurate unless the dog was fed some tranquilliser prior to the shoot. Regular-sized dogs, like Wang Sicong's husky, usually have a heart rate of 160bpm. We don't really blame the Apple Watch though, as all the fur in the way is certainly worse than tattoos on human skin, which Apple admits throws the measurement by the photodiodes off.