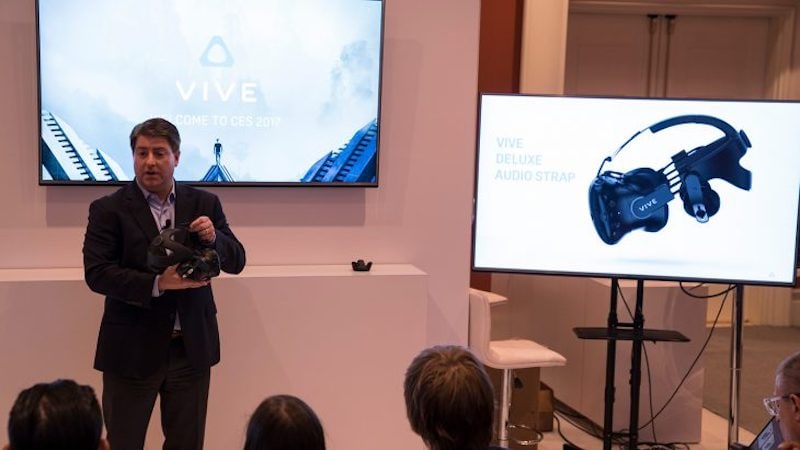 Although many of us were hoping for a Vive 2 from HTC at CES 2017, the company laid that rumour to rest before the event. It has now announced new accessories that do bring significant change to the headset though. There are three main launches that were made on Wednesday - two new products that hadn't been seen before, and one device that had been seen but is now being launched.

The two new devices were the ViveTracker and the ViveDeluxe Audio Strap. These help with object tracking, and offering a better experience with fewer cables and an easier to adjust fit. HTC also announced the launch of the TPCast wireless adaptor (consisting of a battery pack and transmitter that get attached to the top and the back of the headset respectively), which had been incubated through the Vive X accelerator program. The TPCast allows the Vive to go fully wireless, and was first shown by HTC China in November. It will be available globally in Q2 2017, for $249 (approximately Rs. 17,000), and allows you to walk around in VR without any trailing cables to trip over for around an hour an a half, though a separate battery pack is also in the works giving a battery life of up to 5 hours.

The ViveTracker will also be available from Q2 2017, and will enable motion tracking for any kind of object. For example, developers could build a rifle, or a baseball bat, or even haptic gloves, and pair these with the ViveTracker, to enable new kinds of experiences in virtual reality. One of the demos included a training module for firefighters, where the Vive Controller is replaced with a mock-firehose that has a ViveTracker, so the rescue workers can practice realistically on virtual fires. It did not announce a price for the ViveTracker.

The new ViveDeluxe Audio Strap is also expected to ship in Q2 2017, and its price tag is also to be announced. The solution looks pretty straightforward - integrated into the headset are two on-ear cups, with built-in cabling, so you don't have to find a way to put on your headphones after putting on the headset. These can be removed however, if you prefer using your own headphones.

Perhaps more interestingly, the new ViveDeluxe Audio Strap also includes an adjustable dial ring to tighten the straps, allowing you to put the headset on and take it off more easily, without having to fumble with Velcro straps that you can't see.

At the announcement, the company also revealed that 30 titles are added to the Vive store every day, and 1,000 new Vive owners sign on to Steam every day. This side of things also gets an interesting announcement, as the company stated that it will be announcing a subscription service to help you try out new apps and games for a low monthly fee - this will also help developers to reach a bigger audience, the company said.