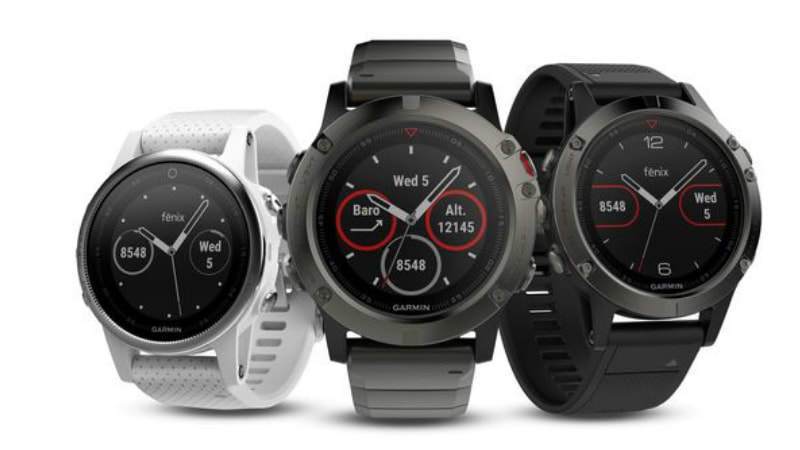 The Fenix 5s essentially just sports a small dial and nothing else, while the Fenix 5x comes with advanced mapping technologies. Apart from this, almost everything else about the three smartwatches is the same. Garmin has skipped one moniker to launch the Fenix 3 successor. Design wise, it has more colour options, and is slightly sleeker than the previous model. The Fenix 5 has a 47mm watch face, while the previous models donned a 51mm face. The Fenix 5s with its smaller 42mm watch face is mainly targeted towards women.

As for functionality, the Fenix 5 smartwatch records swimming, hiking, running, golfing and many other sports. The smartwatch integrates heart rate tracking, and comes with built-in GPS and GLONASS. It also includes interval modes and VO2 Max calculations.

There's also a special Sapphire edition that includes an extra silicone QuickFit band and features Wi-Fi capability for standalone capabilities. The Fenix 5s will be available in White with Carrara White band, Silver with Turquoise band, and Silver with Black band. Sapphire Editions will be available in Black with Black band, Champagne with Gray Suede band, and Champagne with metal band.

The Fenix 5 will be available in Slate Gray with Black band, Silver with Granite Blue band, and Slate with Amp Yellow band. Sapphire editions will be available in Black with Black band, and Slate Gray with metal band. The Fenix 5, Fenix 5S, and Fenix 5x will be made available sometime in the first quarter. The Fenix 5 and Fenix 5s will be priced at $600 (roughly Rs. 40,800), while the Fenix 5x and Sapphire models will bump up the price another $100 (roughly Rs. 6,800).