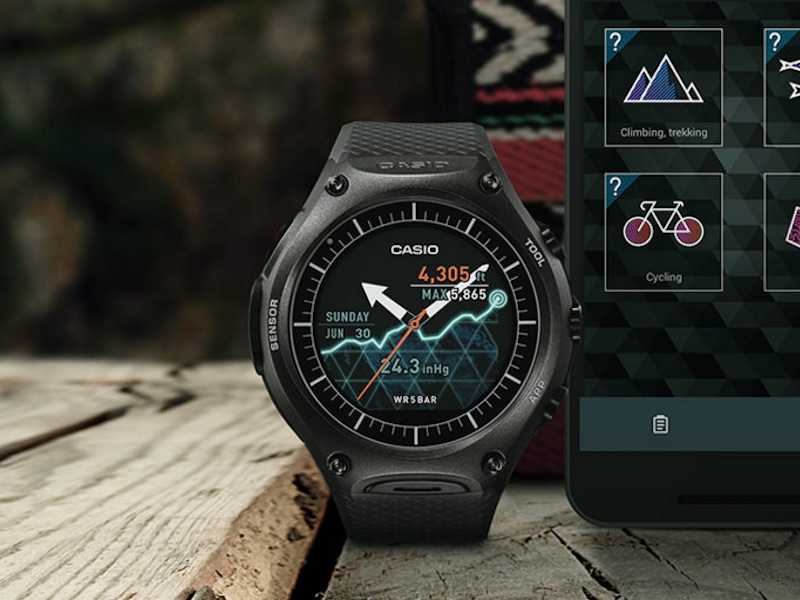 Casio, which has been making advanced digital watches with calculator features for decades, now finally has an Android Wear smartwatch in its rich offerings. The Japanese company on Tuesday unveiled the Casio Smart Outdoor Watch WSD-F10 at its pre-CES 2016 event.

Last year, a Casio executive confirmed that the company had been working on a smartwatch for four years. And the commitment and efforts show up on Casio Smart Outdoor Watch's offerings. It is a certified rugged timepiece.

The Casio Smart Outdoor Watch WSD-F10 runs Android Wear and offers several features that make it unique. The smartwatch comes equipped with a microphone and is water resistant up to 50 metres. The company says that users can use the timepiece in the rain and around water.

The Smart Outdoor Watch is tested to United States military standard MIL-STD-810 issued by the US Department of Defence to perform in the rugged outdoors. The Casio's smartwatch can also withstand a range of environmental conditions including shock and vibration.

The smartwatch comes with apps such as RunKeeper, ViewRanger and MyRadar pre-installed. The device can gauge air and altitude, and encompasses accelerometer, gyroscope, and compass sensors. The upper right button also shows information such as sunrise and sunset times, tide graphs, and activity graphs.

It sports a 1.32-inch circular dual-layer LCD display with a screen resolution of 320x200 pixels. The screen offers two modes: monochrome and colour. Switching the Casio Smart Outdoor Watch into the monochrome mode, while limits the features, expands the battery life from one day to a month.

It works with any device running Android 4.3 KitKat or above, or an iPhone 5 or above. The Casio Smart Outdoor Watch comes in several colour variants as well including Black, Red, and Green. The smartwatch will cost around $500 (roughly Rs. 33,500), and will be available to purchase in Japan in March. It is due to hit the US in April.