Bose to Make AR Glasses With Focus on Sound, Not Video 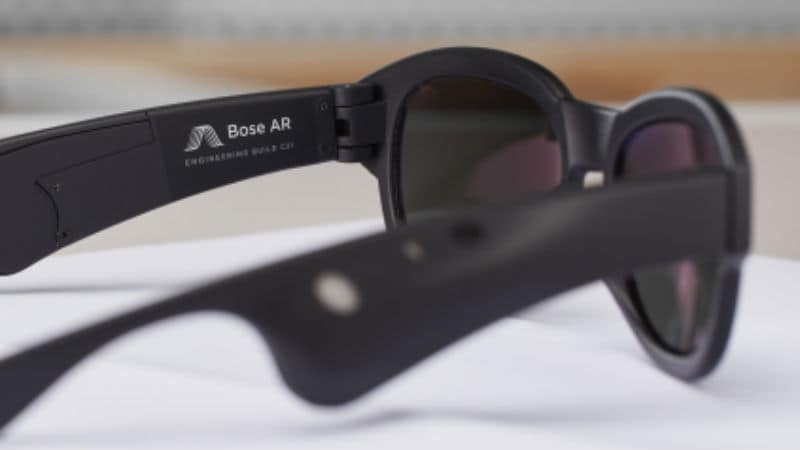 Bose has announced that it developing a pair of augmented reality glasses, which focuses on audio. Rather than superimposition of data over visually, like Google Glass or Intel's Vaunt glasses, Bose's AR technology adds an "audible layer of information and experiences." The audio specialist company isn't just working on these glasses but it also wants to build its audio AR as an entire platform for developers to create experiences. To that end, the company is also releasing a Bose AR SDK.

Most AR glasses aim to enhance what their users see by positioning digitally-rendered visuals in the real world. However, Bose unsurprisingly took a different path. Its AR wearable platform will essentially augment reality with sound, not sight. Bose has developed a prototype pair of glasses that incorporates its AR technology. In each arm of the glasses, there are small acoustics packages embedded, that provide headphone-like features to them.

"It places audio in your surroundings, not digital images, so you can focus on the amazing world around you -- rather than a tiny display," John Gordon, VP (consumer electronics division), Bose, said in a statement. "It knows which way you're facing, and can instantly connect that place and time with endless possibilities for travel, learning, music and more. And it can be added to products and apps we already use and love, removing some of the big obstacles that have kept AR on the sidelines," he added.

The highlight of the Bose AR glasses is that they will understand what a user is looking at, and play audio to complement it. For instance, when travelling you can use the Bose AR to simulate historical events at landmarks, play a speech from any historic figures whose statue, for example, you might be standing in front of.

Notably, there are no cameras or lenses in the Bose AR system. Instead, a Bose AR wearable will use sensors to track head motion and the GPS from an iOS or Android device to track location. These sensors will then send the data to a Bose AR-enabled app which will aggregate the information, and send relevant and real-time content back to the user's ears instantly.

Bose says it is planning to invest up to $50 million in startups focused on apps, services, or technologies for the Bose AR platform. It added that the platform is open to approved developers and manufacturers and current collaborations include companies like ASICS Studio, Strava, TripAdvisor, TuneIn, and Yelp.

Redmi 5 India Launch Date Is March 14, and It Will Be Sold via Amazon
EU Says Taking Doubts Over Google Shopping Solution 'Very Seriously'