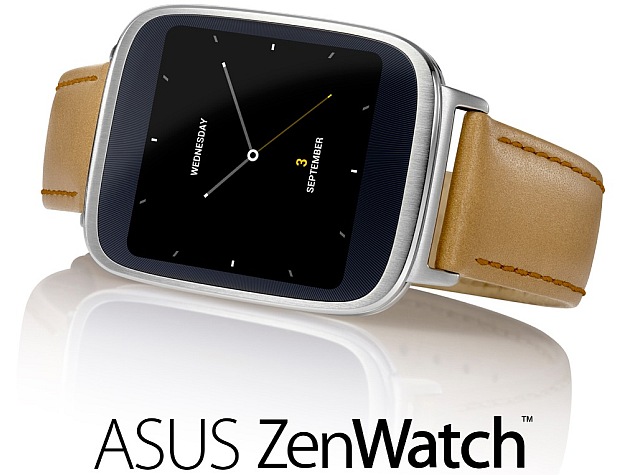 Asus at its pre-IFA 2014 event has launched its much-teased Android Wear smartwatch, the ZenWatch, which also happens to its first wearable device. The company also showcased the new Zenbook UX305, EeeBook X205, and MeMO Pad 7 (ME572C). So far, no pricing has been

Unlike other Android Wear smartwatches unveiled and launched thus far, the Asus ZenWatch features a rectangular display with curved corners. Asus says the final product was inspired by the company's user-centric 'design thinking' philosophy, and is aimed at enabling users to be "always be connected to everything."

The company says the ZenWatch brings the "luxury tradition of fine watchmaking to Android Wear, with an elegant, detail-focused design and use of high-quality materials." It features a soft stitched-leather strap and quick-release clasp. It features a 2.5D curved Corning Gorilla Glass 3 screen, and Asus is also touting the ability to instantly change watch faces, of which more than 100 are available.

The Asus ZenWatch features a special smartwatch version of the ZenUI on top of Android Wear. The smartwatch is compatible with smartphones running Android 4.3 Jelly Bean or higher, and features a 9-axis sensor. The company says the ZenWatch also serves as a 'personal wellness manager' when combined with the companion Asus ZenUI Wellness app - with statistics including steps taken, calories burned, activity duration, heart rate, exercise intensity and relaxation level.

Asus further touts the features on the ZenWatch, such as Watch Unlock (for automatic unlocking), Tap Tap and Find My Phone (both to help locate the paired smartphone), Remote Camera, Cover to Mute (for incoming calls), and Presentation Control (for use as a remote control and time manager). The Taiwanese electronics giant also notes that the ZenWatch, when used with an Asus ZenUI smartphone, brings enhanced versions of Asus ZenUI apps, such as What's Next and Do It Later.

Specifications of the Asus ZenWatch include a 1.63-inch AMOLED display with a 320x320 pixel resolution, translating to a pixel density of 278ppi. It is powered by a 1.2GHz quad-core Qualcomm Snapdragon 400 processor, coupled with 512MB of RAM. It features 4GB of built-in storage, and a 1.4Wh battery.

The ZenWatch has Bluetooth 4.0 and Micro-USB (via charging cradle) connectivity options, and comes with a built-in microphone. It has been given an IP55 water-resistant rating. It weighs 75 grams including strap, and measures 50.6x39.8x7.9-9.4mm.