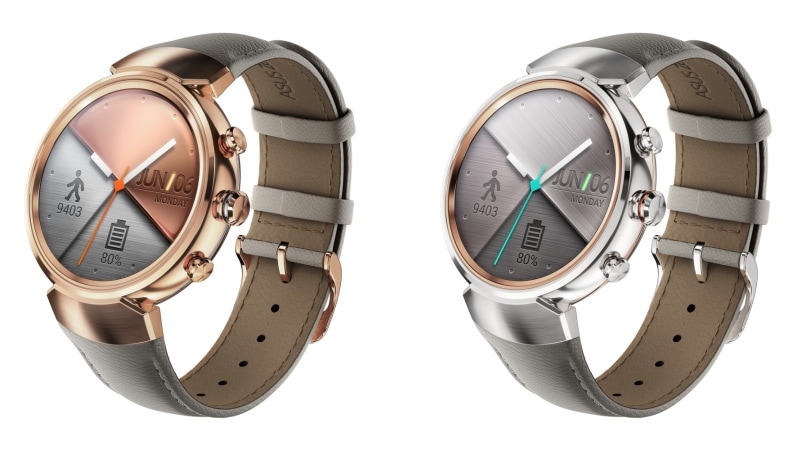 As expected, Asus ahead of IFA 2016 on Wednesday unveiled its latest wearable - the ZenWatch 3 - at its Zenvolution event. The biggest change compared to the ZenWatch 2 (Review) is that it sports a round display instead of a square one - it also comes in only one size variant.

The Android Wear-powered Asus ZenWatch 3 features a 1.39-inch Amoled display with a 400x400 pixel resolution, translating to a pixel density of 287ppi. The company will be providing 50 custom watch faces with the watch, and it is also touting its FaceDesigner app that will let users customise or create their own watch faces.

The ZenWatch 3 smartwatch will be available in three colours of jewellery-grade 316L stainless steel cases - Gunmetal Black (seen below), Silver (seen above), and Rose Gold (seen above) - and all three will feature a gold colour inlay. Beige and dark brown straps will be available in stitched Italian leather or high-quality rubber. It comes with a digital crown, a customisable button, and a button that launches the ZenFit activity tracking app.

As for fitness features, Asus claims the ZenWatch 3 has a 95 percent accurate step counter with the new ZenFit activity tracking app, and can also track activities like push-ups, running, and sit-ups.

Powered by the new Qualcomm Snapdragon Wear 2100 SoC, the Asus ZenWatch 3 sports 512MB of RAM and 4GB of inbuilt storage. The smartwatch measures 9.95mm in thickness, and the company says the 341mAh battery on board can provide up to two days of charge. The company is touting a fast charging feature called HyperCharge, which will charge the battery to 60 percent in 15 minutes. Asus also announced an optional battery pack alongside, but details on this are scarce for now beyond it providing "40 percent more battery life."

Asus Vice President Eric Chen, speaking at the pre-IFA 2016 event, said, "IFA is where we launched our very first smartwatch and we have continued the tradition today with ZenWatch 3. We deeply appreciate the loyal support from consumers in Europe, and we are excited to bring our new Zenvolution product line-up to the European markets."