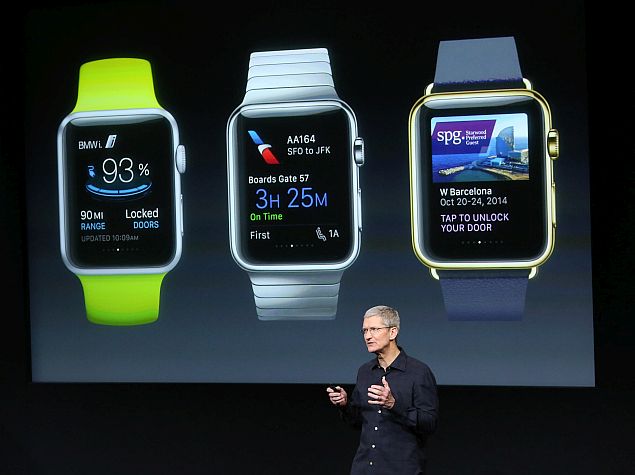 Apple at its Spring Forward event on Monday unveiled its Apple Watch wearable that will be available for pre-order starting April 10 and in stores on April 24. The company however missed to detail specific details about the Watch such as the built-in storage space or whether the battery is non-removable.

Now, reports are emerging suggesting that the Apple Watch packs 8GB of inbuilt storage and a battery that is "replaceable".

9to5mac reports that it has "confirmed" with Apple that the Watch will ship with 8GB of storage; though there are some limitations. "As a user, you are only allowed to use a subsection of that total space for certain types of data," says the report.

Apple has revealed that users can only store up to 2GB of music on the Watch while for photos the limit is even stricter with just 75MB to use. The report further confirmed that all three Apple Watch models - Sport, Watch and Edition - feature 8GB of built-in storage. It adds that Apple wants users to store only limited images on the Watch, which will be automatically managed by iCloud Photo Library. The Apple Watch will also automatically resize images when stored on the device. The report speculates that out of the 6GB of storage some space will be likely be used when native SDK are available.

It's worth noting that the Apple Watch includes almost double the amount of inbuilt storage found on most Android Wear-powered smartwatches. However, we haven't heard of any storage limits imposed on users as of now.

Another important detail has come in suggesting that the Apple Watch packs replaceable battery, according to TechCrunch. An Apple spokesman confirmed to the publication the battery will be replaceable by the company; though no details about how much a user will have to spend for a battery replacement was confirmed. The report added that the "lifecycle of the battery is around three years."

One of the biggest concerns raised by tech enthusiasts about the Apple Watch ahead of its official unveiling was the low battery life and we can expect that the replaceable battery on the wearable will acknowledge the issue in some way. At the Spring Forward event, Tim Cook revealed the Apple Watch will have all-day battery life of roughly 18 hours.

(Also see: Apple Watch Success Will Hinge on Apps That Make It Tick)