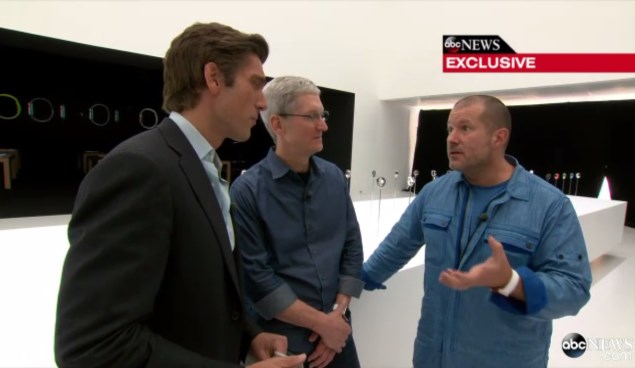 In an informal interview with ABC News correspondent David Muir, Apple's Senior Vice President of Design, Jony Ive has described the process of coming up with the Apple Watch. He gave credit to the team that has worked together for 15 - 20 years, saying the new smartwatch and the iPhone 6 were their best work yet. A snippet of the interview was posted online and republished by The Verge.

When asked whether he had taken the charge in designing the Apple Watch and making it something people would want to wear, Ive responded, "We've always tried to make products that people don't begrudgingly use, but that they want to use, and I think that the bar for that is very high when it's something that you wear, and it's something that you're going to wear all day, every day. And so we worked extremely hard to make it an object that would be desirable but also personal."

Discussing the fact that people wouldn't want to be seen wearing the same watch as everyone else, Ive noted that there were "millions and millions" of different versions of the watch - counting the two sizes, three styles, multiple strap options and especially the large number of personalised watch faces that the device can display.

"The way that we treated this from a design point of view wasn't that you have hardware and then software. Our experience as customers, as users, is that they're one and the same."