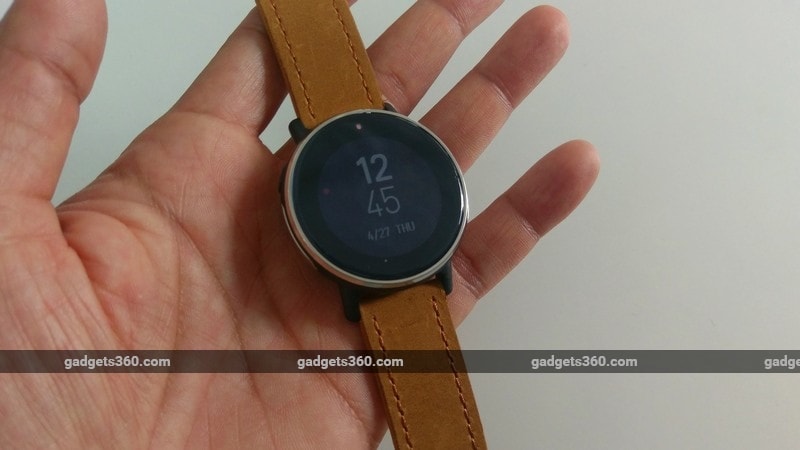 Acer at its Next@Acer event in New York on Thursday launched the Leap Ware 'smart fitness watch' with built-in sensors that allow users to keep a track of their heart-rate, stamina, stress/ fatigue, and even exposure to ultraviolet rays. The fitness tracker will be made available in North America in July, while Europe, the Middle East and Africa will get it in the third-quarter this year, and Taiwan in August. The pricing for the wearable will start from $139 (roughly Rs. 8,900), EUR 139 (roughly Rs. 9,700), and TWD 4,990 (roughly Rs. 10,600) in the respective regions. Separately, the company launched two new 4K UHD projectors for home cinema enthusiasts - the Acer H7850 and V7850.

Firstly talking about the Leap Ware smart fitness watch, the wearable comes with a stainless steel circular frame and is powered by a MediaTek MT2523 chipset and MT2511 bio-sensing chip. The company has claimed that it offers up to 3 to 5 days of battery life. "Equipped with the MediaTek MT2523 chipset and MT2511 bio-sensing chip, the Leap Ware smartwatch has diverse fitness tracking features thanks to an array of sensors with advanced algorithms. It can monitor heart rate, stamina, stress/fatigue levels, and exposure to ultraviolet rays," the company said in its release.

The wearable sports Gorilla Glass SR+, which offers scratch resistance as well as toughness, optical clarity, and touch sensitivity of Gorilla Glass, the company said. The Acer Leap Ware comes with IPX7 water resistance rating and also has a built-in LED light which illuminates at the press of a button.

The smart fitness watch features interchangeable bands and can be paired with an Android or iOS smartphone via the Liquid Life app. "Users can see who is calling or texting, and use the phone's large touchscreen as a dashboard for analysing all of the data collected by the Leap Ware's advanced sensors," the company said in a release. Users can even set fitness goals for themselves with the help of this app.

"As the pace of modern lifestyles become ever more hectic, people demand technology that can keep them on track and motivated to pursue their goals," MH Wang, General Manager, Smart Device Products, IT Products Business, Acer Incorporated, was quoted as saying in the release.

Moving on to the new projectors, Acer says the two 4K UHD projectors are meant for home cinema enthusiasts, and are HDR- and Rec. 2020-compatible for true-to-life light and colour scenes. They also offer Acer AcuMotion technology provides for smooth visuals even during fast action scenes.

Both the Acer H7850 and V7850 projectors can project onto screens of up to 120-inches, and the company is touting the more than 8.3 million on-screen pixels that with its TI XPR technology will ensure fine image details are visible.

"With 4K content being increasingly available through the rise of streaming services, Acer is gladly expanding our display portfolio for both media consumption and content creation," said Victor Chien, President of Digital Display Business, Acer Inc. "Through a solid spectrum of projectors and monitors, we deliver premium visual experiences catering to a wide range of user demands."