What's That on Beyonce's Wrist? Let Me Guess ... an Apple Watch 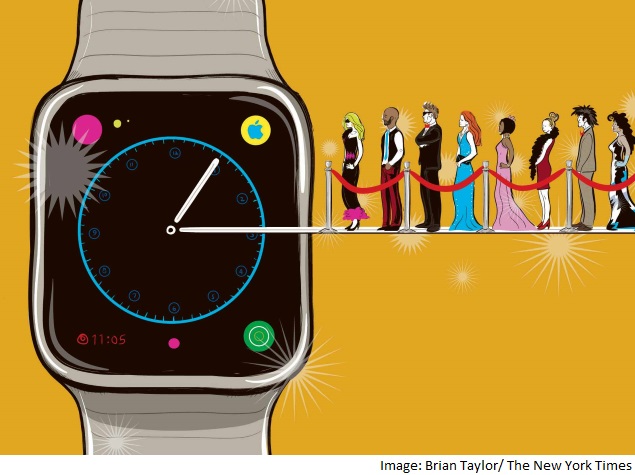 Two weeks ago, Pharrell Williams posted an Instagram video of his Apple Watch. The clip has more than 119,000 likes.

A few days later, Katy Perry snapped an Instagram photo of her Apple Watch that has garnered over 640,000 likes.

And on Monday, Beyoncé posted a photo of herself wearing a custom gold-on-gold version.

They are not the only ones who have managed to get their hands on the highly coveted Apple Watch, days if not weeks before it is available to the public on Friday.

Drake posted a picture of his gold Apple Watch from Coachella. Anna Wintour wore one at a Burberry runway show in Los Angeles last week. And Karl Lagerfeld wore a one-of-a-kind Apple Watch made for him, according to an Instagram photo posted by his bodyguard.

This is a far cry from 2007, when the first Apple iPhone was released. Back then, Steve Jobs was fielding calls from all sorts of superstars like Shaquille O'Neal who sought the new device. They were all met with a resounding "no."

"Lots of people have requested iPhones," an Apple spokeswoman told The Los Angeles Times in 2007. "No one is getting any special treatment."

Apple tested the celebrity waters during the 2010 introduction of the iPad, letting Stephen Colbert use one at the Grammys. But today, it seems that everyone famous (or at least those on Apple's A-list) is getting an Apple Watch.

As my colleague Brian X. Chen wrote about this week, Apple is borrowing a page from luxury purveyors. Instead of the mass rollouts that Apple is famous for, including people lining up for days outside Apple stores worldwide, the company appears to be seeking exclusivity by limiting where its watches are sold and who wears them. (While megastars are getting them early, mere mortals are now being told the watches aren't shipping until June.)

Gavin B. Keilly, chief executive of GBK Productions, a marketing firm in Los Angeles that specializes in putting high-end items in the hands of trendsetters, says that Apple is giving its watches to celebrities because the masses adopt fashion in a very different way than they do technology.

With gadgets, consumers seek out the advice of experts. With fashion, trendsetters often set the agenda. "If a celebrity is wearing something, it's going to make someone want to go out and buy it," Keilly said. "Celebrities: They sell."

Apple isn't the first consumer electronics company to cozy up to the rich and famous. Technology companies, large and small, all try to get their smartphones, tablets and wearable computers into the hands of influencers.

Samsung has been particularly aggressive, inviting stars to show up at product introductions, sponsoring Hollywood award shows, hosting parties during fashion week and (of course) handing out devices to the famous.

(Internal Revenue Service rules require recipients of gifts worth more than $600 to pay tax on those items. Some companies refer to the freebies as "long-term loans.")

Giving away products is something that fashion brands have done for years.

When multiple editors appear in the front row of a ready-to-wear show with the same handbag, which then appears all over street-style blogs, it is a pretty good clue that they received it as a present. Many of the dresses seen on red carpets these days are on loan from fashion houses, if not given outright to the wearer.

Gifting, or swag, suites have popped up wherever boldface names gather, including awards shows and film festivals, where anything from bluejeans to fur vests is theirs for the taking.

"I think consumers need an extra push with the celebrity endorsement," said Robert Burke, chief executive of Robert Burke Associates, a luxury consulting and fashion firm in New York. "This has been a common practice in the fashion world, but is new to the technology world."

He added that because the Apple Watch blurs the line between fashion and technology, "it makes sense for people to see celebrities with the watch."

Lash Fary, founder of Distinctive Assets, which is based in Los Angeles and manages luxury promotions, said it is not about trying to get people to buy the most expensive version of the Apple Watch, but the version that fits into their budget, much as a fashion house's couture line creates demand for its off-the-rack label. (Prices for the Apple Watch range from $349 to $17,000.)

"A lot of the celebrity feeding is about perception in the fashion world," Fary said. "It's perceived that the brand has stardust now."

But seeing a celebrity flaunt a product doesn't ensure its success. In 2006, Keilly of GBK Productions said he gave away "over a million dollars" worth of gold-plated cellphones valued at an $3,500 each from a company called Buzzirk Mobile. While the phone got a lot of media attention, the company ended up going bankrupt.

And this isn't the first pricey gadget given to A-listers in the hopes of turning it into a must-have fashion accessory. Dozens of actors and performers, including Oprah, Sarah Jessica Parker, Bill Murray, Miley Cyrus and, yes, Beyoncé, were seen wearing Google Glass.

And we all know how that worked out.