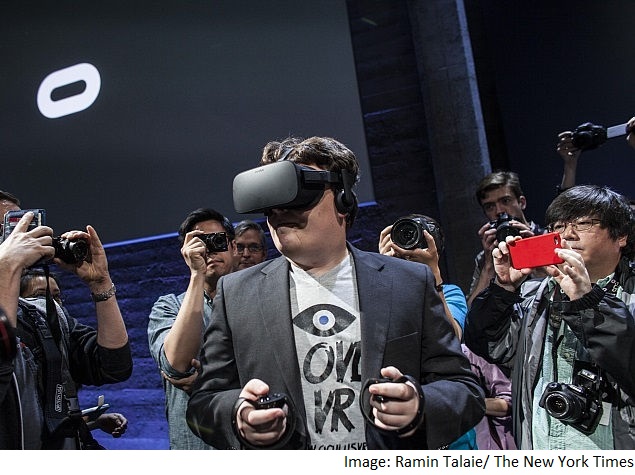 Every Friday, a dozen or so people strap on virtual reality headsets, log on to the Internet and do something that would normally require driving to a local multiplex: watch a movie with a bunch of strangers.

Their avatars all sit in the seats of a virtual movie theatre, staring at a screen playing a movie from Netflix. The sound from the theatre is so accurate that if participants munch potato chips into their microphones, it sounds as though it is emanating from their avatars.

"When all of a sudden 10 avatars turn around and look at you, you know you should be quiet," said Eric Romo, the chief executive of AltspaceVR, a Silicon Valley startup that organizes the virtual movie gatherings and other virtual reality events.

The ability of virtual reality to transport people to locales, both exotic and ordinary, is well known. Yet how the medium will fit into people's online and offline lives is a new frontier. The best known of a new league of virtual reality headsets, HTC's Vive by Valve, will start going on sale by the end of the year, and the devices will be a hot topic this week at the Electronic Entertainment Expo, or E3, one of the largest annual gatherings for the video game industry.

That makes the thousands of developers and early adopters, who have prototype virtual reality headsets, effectively lab rats for these devices. They're the ones figuring out how to navigate their real-life surroundings when their vision of the real world is shut out. They're learning which virtual reality experiences are fun, which are creepy and which might make people nauseated from motion sickness.

Etiquette around social forms of virtual reality is already taking shape since this technology has the potential to turn some of the more noxious forms of online behavior into something far more menacing.

"We're kind of at the Pong level of working with this," said Chet Faliszek, who works on virtual reality at Valve, a game developer in Bellevue, Washington, referring to one of the earliest arcade video games to help popularize video gaming. "There's so much more we're discovering."

Virtual reality has flopped in popularity before and could again. But its proponents, speaking in awe-struck terms about the coming wave of headsets, promise the technology has finally caught up to the hype. Facebook paid $2 billion to acquire Oculus VR, a startup that last week showed the final design of the virtual reality headset that it plans to begin selling in the first quarter of 2016.

Sony is expected to reveal more this week at E3 about its own virtual reality headset, called Project Morpheus, for the PlayStation 4. None of these companies have announced prices yet.

"We feel very strongly that virtual reality is going to be the next big thing for entertainment," said Kim Libreri, chief technology officer at Epic Games, a game developer investing in virtual reality projects.

One question about virtual reality is what will happen to people in the real world when they are transfixed by virtual space. All of the screens in consumers' lives - whether on televisions, smartphones and computers - can be absorbing. They do not, however, completely occlude what's happening around someone the way virtual reality headsets do.

People immersed in a virtual reality game can easily lose track of where furniture, windows and humans are around them. At Valve, developers plan to minimize unwanted collisions with a feature it calls a "chaperone" system.

The technology maps the terrain of a room: furniture, walls and all. When someone wearing a headset gets close to an object, a wireframe model of the room materializes in the virtual space in front of their eyes, fading as they move away.

More than a half-dozen virtual reality developers at Valve are crammed into a room, and they often have their headsets on at the same time, playing games on their own. "Rule No. 1 is if someone has a headset on and you don't, it's your fault if you get punched," Faliszek said.

Mobile virtual reality involves other hazards. There are headsets on the market that cradle smartphones in front of peoples' eyes, using lenses and the screens on the devices to create 3D images.

No wires dangle between the mobile headsets and a computer or console, as they do with other systems, so users are free to tune out in virtual space while sitting in a restaurant or park. In fact, this year, Australian airline Qantas started testing mobile virtual reality headsets, made by Samsung, in some airport lounges and first-class cabins on some flights.

But wearing a virtual reality headset in public could make someone a target for derision and, more seriously, theft. Patrick O'Luanaigh, chief executive of nDreams, a British developer of virtual reality software, put on a mobile headset on a train ride this year from Reading to Bristol. He turned on an nDreams app called Perfect Beach that simulated the experience of lying in the sand as waves gently lapped at his virtual feet.

"You forget where you are other than the vibrations and bouncing," said O'Luanaigh, who did not forget to stuff his bag between his actual feet.

The protocol for interrupting someone's virtual reality session isn't clear - a light tap on the shoulder, developers say, is the best way to avoid startling someone. Researchers who have spent years studying virtual reality believe it will be less socially awkward than it may seem to encounter someone who's wearing a headset.

"When you're in a room with somebody and you have a mobile device in front of you, they think they have your presence," said Mark Bolas, an associate professor of interactive media at the University of Southern California. "In a virtual environment, they know they don't have your presence. You almost want to leave that person alone."

A trickier challenge could be policing virtual reality games that are social in nature. Developers are buzzing over the possibilities of immersive virtual worlds in which people connect with each other. The potential for harassment, though, which is bad enough in conventional online video games, and other forms of abuse - especially in online settings that permit anonymity - are very real for virtual reality.

"It creates these lifelike experiences in a space pretty abstracted from the real world," said Matt McIlwain, managing director of Madrona Venture Group, a venture capital firm in Seattle that is pursuing virtual reality investments. "That has the opportunity to amplify both the positives and negatives of human nature."

When players in a virtual reality game are inhabiting the perspective of an avatar, other players who get too close to them can feel like they are inappropriately violating their personal space.

Bolas believes social virtual reality games will come up with "bounding boxes" - essentially, force fields that players can place around their avatars to keep others away.

"We are going to have new conventions that deal with that," Bolas said.