SmartMove can turn any shoe into a fitness tracker 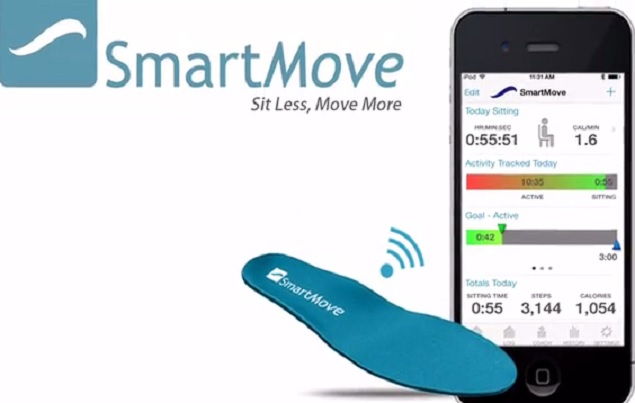 Every week, we're going to be checking out what's new on Kickstarter to find the most innovative and interesting new projects on the crowdfunding website. That's because in the last couple of years, some of the most exciting developments in technology have come, not from the established players but from small teams with big dreams, like the Pebble smartwatchand the Oculus Rift. We're watching out for what comes next. Something like the SmartMove smart insole, for example.

The majority of new wearables on the market are wristbands. The reasoning is pretty simple -a wristband is something that you can keep on your person at all times,it's something that is easy to use and non-intrusive, and we're used tothe idea of wearing watches, so it's not a big behavioural change.

Asanyone who's used their phone or a fitness tracker regularly quickly learns though, the accuracy of a device that is in your pocket or on your wrist can be questionable. If you're wearing a wristband and sitting and eating, the movement of your hand will make it seem like you're exercising, while cycling - where your hand stays in one place - isn't going to show up accurately.

That's where the SmartMove Kickstarter which is open till May 27 comes in. With 33 days to go at the time of writing, this project is nearing 20% of the funding being sought, which looks pretty positive.

The SmartMove is a sensor built into an insole, which you can move from one shoe to the next; you can keep it inyour running shoes is you want to measure your exercise alone, but if you want a more comprehensive picture, you could just shift the insole to your dress shoes in the morning before going to office.

Accordingto its creators, the SmartMove can track sitting time, as well as otherdaily activities such as standing, walking, running and cycling. This pairs with a smartphone app that can give you a real time display of your current activity and calorie burn rate, and can also track all yourexercise history.

Since it can track daily activity such as sitting at work as well as your exercise, you can get a more comprehensive picture of your day to day life. And in an interesting feature, there's also a coach that makes recommendations based on the figures you're uploading to the cloud - it's a software algorithm, whichuses a texting style interface to "talk" to you and motivate you to getmore exercise!

Given that anecdotally, most fitness wearables areused enthusiastically at first but quickly discarded, having regular motivation to stay engaged is clearly important - this is the essential element of the recently launched Indian fitness wearable, the GoQii fitness band.Unlike the GoQii, which uses actual fitness coaches, the SmartMove is going to use data analysis to provide the relevant information and motivation, from the cloud.

The SmartMove uses standard watch batteries, the kind that are known as coin cells, and claims a two monthoperational life with a single battery, which makes sense since the device has no display. The project is based off an existing product which was developed with funding from the National Institues of Health and the National Science Foundation in the United States and is already being used in clinical trials, which also increases the confidence that this Kickstarter will end in an actual product.

With a backer price starting from $99, it's a reasonably priced device which promises agreat deal of accuracy, and ease of use. Unlike other wearables it's also perfectly discreet, and this should make it a lot more appealing tothe larger public than a wrist band.

With a clear product path and few indications of overreaching, the SmartMove sounds like a good product to back.