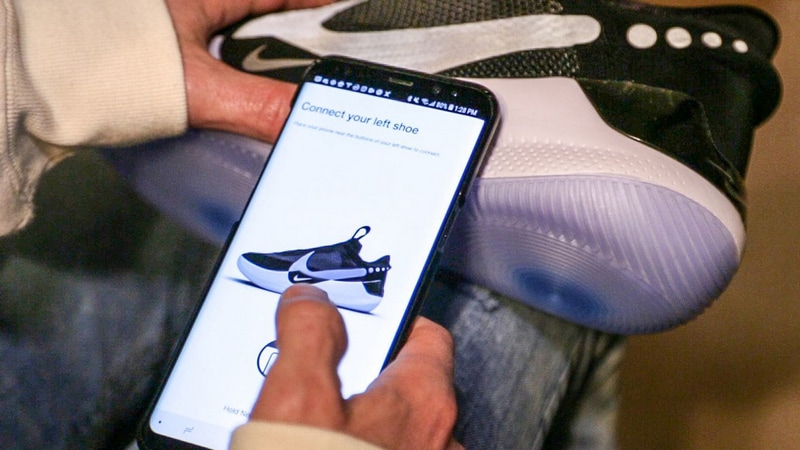 Nike's most-advanced kicks have been turning into bricks. Blame the Internet.

Last month, Nike began selling shoes that lace themselves, much like Marty McFly's sneakers in "Back to the Future 2." The $350 (roughly Rs. 24,000) Adapt BB shoes wirelessly connect to a phone to tighten and loosen with an app.

Then a dream from 1989 met the exhausting reality of 2019. Fresh out of the box, Nike's connected shoes recommended a software update - which broke some. More than an embarrassment, it exposed a truth that bears repeating about the future of all sorts of products: When something connects to the Internet, you're not really in control of it.

Mike, a sneaker collector in Virginia, told me his expensive shoes were suddenly no longer even useful as . . . shoes. The software update via his Android phone corrupted the "lace engine" so the sneaker couldn't tighten - even with manual buttons.

"The whole thing is surreal," said Mike, who spoke on the condition of not using his last name because he's in the shoe-reselling business and feared retribution.

Nike says the problem affected a small number of customers, though its app has a 2.4-star rating in Google's Play store.

The self-lacing shoes are hardly the first "smart" thing to turn dumb. We've seen Nest thermostats freeze out owners and Teslas that won't drive after an over-the-air update, a phenomenon called "bricking." As a gadget reviewer, I've been locked out by a smart lock and waked at 3am by a connected fire alarm gone rogue.

These experiences have a profane name, and even a Twitter feed.

The term is a play on the awkward adolescence of the Internet of Things, or IoT, the Silicon Valley idea that connecting ordinary objects to a network will revolutionise homes, cities, farms and, in the case of Nike, feet.

Despite the frequent faceplants, connected gadgets aren't going away. There's an argument to be made for going slow in adopting this technology, particularly when it offers trivial benefits. But connectivity is already becoming standard on new cars, speakers, thermostats and doorbells - some of which are quite useful. The world will have nearly 19 billion connected "things" by 2020, triple the number from 2016, Gartner estimates.

There's a ton at stake for our security and privacy, not to mention sanity and money. So how do we get the good connected things and avoid the ones that are going to end up on the Internet of (expletive) list? Nike says it has now fixed its shoes, but we can learn a few things about staying in control from how it bricked them in the first place.

What really is a connected shoe - or smart speaker, thermostat or other connected thing? It's a way for a company to stay in your life. Before you bring one home, it's best to ask if they're truly relationship material.

Of course, the manufacturers don't present it that way. Nike says the power-lacing tech in the Adapt BB sneakers allows the shoe's fit to adjust to athletes' changing needs. A cable tightens the shoes when you press a button or tap on a smartphone app.

I don't recall the shoes in "Back to the Future 2" using an app to operate. Nike's app lets you dial in a precise fit and personalise some buttons. But they're already planning for more: Inside the shoes, there's also an accelerometer, gyroscope, capacitive and temperature sensor that could be unlocked with software updates to collect information about your steps, performance or . . . who knows.

In interviews at the shoe's launch, executives talked about the Adapt BB as an "intelligent product" or even a communications device. (Remember, this is a shoe.) Staying in our lives after a purchase gives a manufacturer new opportunities to make money, be it from our data, advertising, in-app purchases or services.

Software updates are usually a good thing, I was reminded by Yves Béhar, the celebrated designer of many connected devices, from August door locks to the Snoo connected baby bassinet.

But there's trust in that relationship that has to be earned, and can be easily ruined by putting features ahead of privacy, simplicity and reliability. My least-favorite example is printer makers that got caught issuing updates that make it harder to use cheap, unauthorised ink.

Nike, which has had fits and starts with connected products including the Nike+ footpod and Fuelband that it no longer supports, missed a few trust elements. For one, these sneakers have physical buttons, but they still require working software and power to operate.

Second, while software mishaps happen to every company, Nike really messed up. There are many different phone models, and in its testing Nike didn't realise some couldn't maintain a Bluetooth connection well enough to apply a software update.

A corrupted update wouldn't have been lethal except for another Nike oversight: some shoes shipped without a "gold image" backup of the software they needed to operate. It was a recipe for making self-lacing shoes come undone.

Nike could have communicated better about its software problem, but at least it had a warranty and responsive support team. For Mike in Virginia, the episode mostly cost time in emails, a conference call with Nike, and lots and lots of fussing with his shoes. "I tried all the troubleshooting steps: resetting the hardware, resetting the software, resetting the Bluetooth, uninstalling the app and reinstalling," he said.

A Nike spokeswoman said: "After working directly with the small number of affected customers, we have resolved the isolated connectivity issues with a software update that will be rolled out," she said.

At least you can take off the sneakers. Imagine if you've built a smart product into your home, and its maker goes out of business, sells to another company or for whatever reason shuts off your product.

"The law around all of these is developing. We don't really know if someone sells a connected product, what are the manufacturer's obligations with regard to it," said Justin Brookman, a former staff member of the Federal Trade Commission who now runs privacy and technology policy for Consumer Reports.

In this wild West, Nike's broken shoes looks relatively innocent. Lots of IoT devices are also making grabs for data - keeping track of where you drive, or when you turn on the lights. Google got in trouble last month for not disclosing it built a microphone into its Nest security product, which it activated after the fact with an update.

Another concern is how well, and for how long, makers of connected products issue updates for security risks, like we expect on laptops and phones.

Good grief, how are we supposed to figure out which products won't crap out, spy on us, or let in hackers? Consumer Reports is working to include security and privacy practices in its reviews, but Brookman said getting clear answers out of privacy policies is a challenge even for pros.

Another nonprofit, the Mozilla Foundation, has been conducting security and privacy audits for its own online guide called "Privacy not included." Among its discoveries were scary privacy practices by adult toys, which you definitely don't want spying on you.

You'd think the products made by big brands would score best, but that's not always the case, said Becca Ricks, a researcher at Mozilla. "The companies with a lot of brand recognition may have done a good job locking down security, but what we have questions about is their business model with our data," she said.

Last month, the Internet Society, Mozilla, Common Sense Media and other consumer-rights groups appealed to retailers to endorse standards for IoT products they sell. They were truly bare minimums - using encryption to keep customer data private, offering security updates, having a process to handle bugs and offering a privacy policy that doesn't require a law degree to read.

Nike ended up telling Mike that his shoes were not recoverable and needed replacing. He opted for a refund.