Google Glass to Take Sports Fans Closer to the Action

Google Glass is slowly becoming more common in sports as teams and broadcasters try to bring fans closer to the action. The American football team Philadelphia Eagles will test the Internet-connected eyewear for in-game use, and a company with a key application for the technology says it has secured a new round of financing that will help roll out its Glass program to sports, entertainment and other fields.

The futuristic eyewear was known as "Project Glass" when it was introduced by Google in a video and blog post in April 2012. The U.S. company started selling the $1,500 glasses to a select crowd later that same year, but it only recently became available to the general public.

The use of Glass in sports has progressed from trendy athletes dipping their toes in the water to a tool for teams looking to draw fans to arenas and stadiums, and then keep their focus on the action, instead of their omnipresent smartphones and tablets. It comes with endless revenue possibilities, ranging from sponsorship deals for the new content streams to a possible attendance boost for teams with empty upper decks.

"I think the fan experience one is the one that's really hitting hard," said Eric Johnsen, the business development lead for Glass at Work, "and the performance line people are dabbling with, that's really interesting."

Punter Chris Kluwe used the eyewear in training camp last year to take fans inside the practice of Oakland Raiders, an American football team in California. Another team let its key player wear the glasses at Super Bowl media day and Roger Federer used one when he hit with former tennis star Stefan Edberg during a visit to Google's campus.

But it is the big-picture applications that offer intriguing possibilities for teams and leagues concerned about attendance in the 21st century, when flat-screen TVs and rising prices at sporting events have made the in-home experience even more appealing.

The 2014 Know the Fan Report, produced by Sporting News Media, Kantar Media and SportBusiness Group, found 45 percent of fans use a second-screen device while watching sports on TV, a definite factor in the willingness of teams and broadcasters to take a closer look at Glass, which has a thumbnail-sized screen attached above the right eye so a user can check email or see Twitter posts without having to grope for a phone. The report was based on a survey of more than 1,000 American adults conducted in February.

"The focus has been through sports at large, how do you get people using their phones to interact during the game?" said Rob Laycock, the vice president of marketing for the Indianapolis basketball teams Indiana Pacers and Fever. 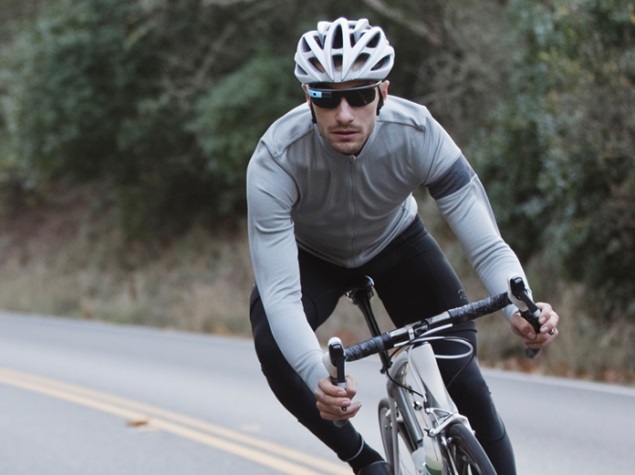 "What's nice about Glass is that it's keeping your focus on centre stage, you know main court, with the scoreboard right above it."

Several U.S. basketball teams have experimented with employing Glass in the arena, by putting the eyewear on mascots and others during games, allowing fans at the game and viewing at home to witness the courtside experience.

There are many factors at play with the use of Glass at sports venues, including the strength of the Wi-Fi network and the reliability of moving people wearing the technology. Thousands of people using their phones to post to social media or check fantasy sports can grind Wi-Fi networks to a halt, and a courtside perspective becomes much less attractive when it's an obstructed view.

That's where the CrowdOptic program comes in, which teams are trying out to provide multiple courtside perspectives over the videoboard during games.

"What our stuff does is it really converts all this chaos into a demonstrable broadcast feed that, for example, the Pacers can really count on," said Jon Fisher, the CEO and co-founder of San Francisco-based company. "So they can put Glass out there and it can work in many cases as well as any other fixed camera asset because of these algorithms at work."

Maintaining a reliable feed is just one potential problem for sports teams deploying the technology. There is concern about overwhelming fans with a barrage of viewing options. The eyewear has faced criticism over its intrusiveness and its ability to take photos and video through voice-activated commands, making it more likely that even attentive fans could find themselves on the videoboard before they realize what's going on.

The rollouts have been conducted with great care.

"We haven't just determined yet who's going to be wearing the Glass and deploying it, that's all up for a lot of discussion," Papson said. "But I think as content such as this continues to be more available, I think every team has those discussions as to what's not appropriate to provide."