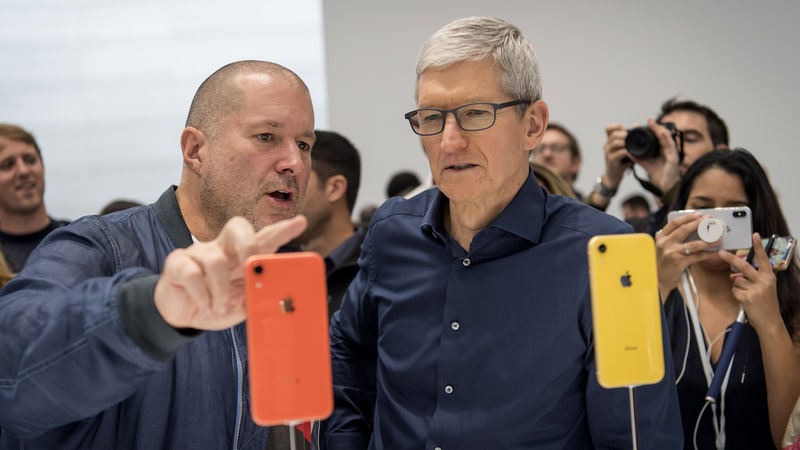 Jony Ive, Apple's design chief, on Wednesday unveiled a new iPhone, the biggest deal at the biggest gadget launch of the year. But a different product is closest to his heart: the Apple Watch.

Ive, Apple's chief designer, gave Apple's original wearable device a complete makeover in form and function. The Apple Watch Series 4, which Apple also introduced Wednesday as part of its annual product event, is slimmer and has new health tracking features such as the ability to take an electrocardiogram and detect hard falls - and is increasingly independent from the iPhone. That gives it a more profound purpose, in Ive's vision, and sets it apart from other technology.

"Every bone in my body tells me this is very significant," Ive said in an interview in the Steve Jobs Theater at Apple's headquarters following the event. Ive, like the former Apple CEO who was his close friend, speaks of Apple innovations with fervor. The new watch "will be a more marked tipping point in understanding and adoption of the product. "

Much of the attention and anticipation around the annual event is wrapped up in Apple's best-selling device, the iPhone. There is a new line of them again this year, bigger and more expensive than before. But the watch, which isn't even four years old yet, has established itself as a significant adjacent business. Apple doesn't break out sales numbers, but said its device is the best-selling watch in the world.

The increasing popularity of the watch, which Ive has set up as the cornerstone of wearable technology, is critical to Apple as the iPhone sales growth wanes. "Apple's inception was about making tech useful and relevant, in a very personal way. And the watch is unambiguously the most personal product we make," said Ive, who joined Apple more than 25 years ago and first made his mark with the candy-coloured iMacs of the 1990s.

Ive won't give away how Apple wearables could spiral beyond the watch, though company watchers expect an augmented reality device could be in the works. He hints that the watch, on the other hand, could evolve in the years to come.

"The clues for the future are when you can have a high degree of confidence that you personally are connected to the Net - not your phone, you," said Ive. Sporting a new watch with a white rubberized band, Ive said the gadget has helped him lessen his dependence on his phone.

It has taken time for the watch to gain traction. When it was introduced in 2015, the watch was pitched in part as a fashion accessory, and Vogue devoted a spread to it. More recent versions began to emphasize health with new apps and functions - measuring heart beats, encouraging deep breaths, challenging friends with fitness goals.

Then the letters began pouring in. People described how the watch saved their lives, by detecting medical abnormalities or allowing them to contact someone in an emergency such as a car crash. Ive said he has read "thousands" of the letters and has used his watch in an emergency.

"I'm so zealous about the watch because I see it as making a material difference to people's quality of life and actually their ability to be alive," Ive said.

The new Series 4 takes the promised health benefits one step further than before. Apple received Food and Drug Administration clearance for its electrocardiogram function, also known as an ECG or EKG, which Apple claimed was the first time it has been granted to a mainstream direct-to-consumer device.

Ive said the digital crown on the side of the watch had to be redesigned to be conductive for a pulse. As a result, the cellular version of the watch has a thin red circle around the outside of the crown, instead of the full red dot in the previous watch. The crown is one of two touch points necessary for the EKG function, along with an electrical heart rate sensor implanted in the back of the watch.

Still, the clinical capabilities of smartwatches are in question. Researchers from the University of California at San Francisco used an older version of the Apple Watch to monitor for signs of atrial fibrillation, which is a major cause of stroke. They found it was not a reliable method of detection. Apple partnered with Stanford University a year ago to conduct a study on monitoring for irregular heartbeats.

The revamped watch, which starts at $399 (roughly Rs. 28,000) and goes on sale Friday, is smaller in volume than its predecessor but has a bigger screen. In the past couple years, it has become increasingly distinct from the iPhone including by its own cellular connection. New sensors, faster chips and a louder speaker continue to make it more of a stand-alone device.

The bigger screen, which stretches closer to the edge of the watch, makes the watch easier to use - but Ive sees it as a way to be less glued to our devices.

"The screen size isn't so expansive that you somehow feel you'll fill every minute browsing whatever you browse, whether it's your social media, " said Ive. He added: "It addresses that functional imperative of being able to be in touch. "