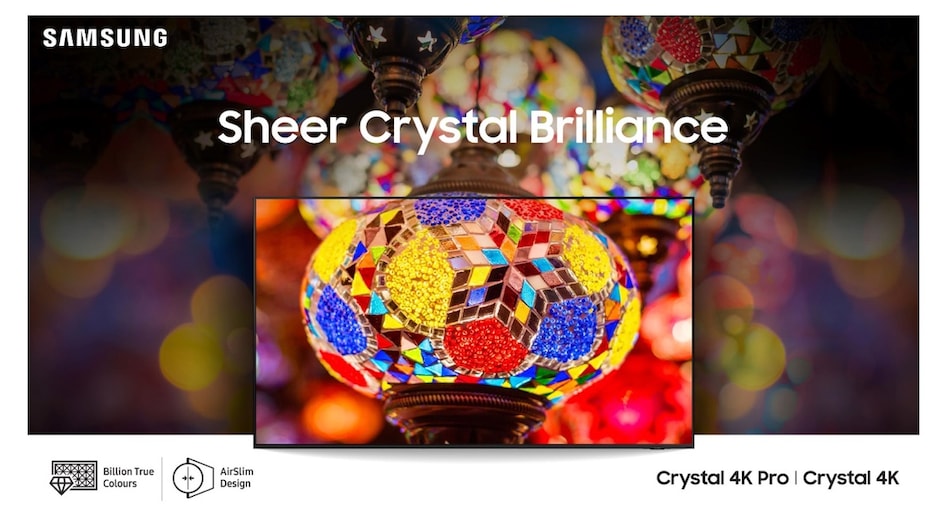 Samsung has launched its next generation of 4K UHD TVs, Crystal 4K and 4K Pro. Samsung, which has been the leading television brand in India for 14 years now, says Crystal 4K is the next evolution of UHD. That's because of a number of technical advancements Samsung has made, which elevate the viewing experience and redefine display in the UHD TV segment. If you're looking for a new television in the 4K TV segment, then you should really be looking at the Crystal 4K series, to see the difference in picture quality that Samsung is providing.

Samsung's new display has a billion true colours with optimised colour expression, so that you can see every detail. Compared to the normal Full-HD TVs that most houses still have, the new 4K series televisions offer 4x more pixels, and that much more detail in the picture as well. But that's not the only thing to consider, because the Crystal 4K and 4K Pro TVs set a new benchmark in display and design in the UHD segment, while coming in at mid-premium prices that make them more appealing to everyone.

Samsung's new Crystal 4K and 4K Pro televisions have a number of enhancements that make the display much more vibrant and immersive. Its new PurColor technology makes watching films feel real, enabling the TV to express a huge range of colours for optimal picture performance. Samsung has tuned the backlights and colour filters to optimise the picture quality and achieve more natural and accurate colour tones that are free of distortion thanks to a clear ‘native white' technology.

The televisions in the series also make use of HDR (High Dynamic Range) technology, with support for both Dolby Vision and HDR 10+, the two leading formats for HDR content, so that no matter what you're watching, you'll be able to see it in the highest quality possible. The Crystal Processor 4K also upscales all content to 4K-level picture quality by analysing the low-resolution videos that you're getting from your DTH or streaming service, and the adjusts the low-resolution, optimises contrast ratios, and improves the HDR, using sophisticated 16-bit 3D colour mapping.

Finally, the display has one more trick up its sleeve — the Motion Xcelerator feature. This brings clear picture and performance to the display by automatically estimating and compensating frames for the content that you're watching. Why does this matter? Because it makes fast-paced action much clearer and better to watch, so that the next time you're watching a football or cricket match, an F1 race, or a fast-moving action movie, you'll be able to see everything as it happens, in perfect detail.

The Samsung Crystal 4K and 4K Pro series also brings in improvements in a number of other ways, starting with the design. Although the first thing you'll probably notice about the television is the stunning display, the design isn't far behind. Samsung has made a 3-side bezel-less design which it calls the AirSlim design, that lets you focus on the picture, giving the television a modern and refined minimalistic look.

Apart from looking better, the Samsung Crystal 4K sounds better as well. It uses the enhanced smarts of the new series to optimise the sound based on the viewing environment and the audio components of what you're watching, thanks to its Adaptive Sound technology. The series also allows the TV and Soundbar speakers to operate simultaneously, for better surround sound, through Samsung's Q-Symphony technology with the Samsung Q series Soundbars.

All of the above is possible because this is one of the smartest televisions Samsung has made. The Crystal 4K Pro series comes with built-in voice assistants so that you can quickly access content, ask questions, or control your television, through either Samsung's Bixby, or Amazon Alexa. Game mode prevents input latency and gives faster reaction time, making it a big plus for people using the televisions with their Xbox or PlayStation consoles. Tap View allows you to mirror movies or music with just a tap, and Samsung TV Plus brings free live streaming of TV content with Samsung's Virtual channels. You can also access your PC, laptop, or mobile, seamlessly on your TV with Samsung's PC on TV feature.

So, what are you waiting for? Check out the Samsung Crystal 4K and Crystal 4K series now — visit Amazon, Flipkart, or the Samsung e-Store to take advantage of pre-booking offers, and to avail of easy EMIs now.

US Senator Found Driving While Pretending to Work From Home During Zoom Call: See What Gave Him Away
Elon Musk Says Cryptocurrency Promising But Exercise Caution While Investing