Zoook has been making a name for itself with its affordable Bluetooth speakers, and some of its products that we've reviewed in the past include the Zoook Rocker Armor XL, and the Zoook ZB Jazz Blaster Bluetooth. These were middle-of-the-road in terms of audio quality, and so when we started testing its latest speaker, the Zoook ZB Solar Muse, we expected more of the same.

The Zoook ZB Solar Muse has a couple of unique gimmicks that might make it worth your time. There's a small torch built into it that can be set to pulse at two different speeds, so you can use it as an emergency beacon, apart from emitting a steady beam. The other is that the speaker has a solar panel on the top that can be used to charge its battery, although you can also charge it with a Micro-USB cable. Zoook claims that the battery can deliver 30 hours of playback time, and that 10 minutes of sunshine can give you 30 minutes of uninterrupted music.

Added to that, the Zoook ZB Solar Muse is shockproof, rustproof, and waterproof, which makes it sound like the perfect companion to take on a trip. It has an official MRP of Rs. 8,000, but is currently selling for Rs. 4,999 (according to the company - online prices were even lower) which still isn’t exactly cheap. We took a closer look at the Zoook ZB Solar Muse to see how it measures up, and whether you're really getting bang for your buck. 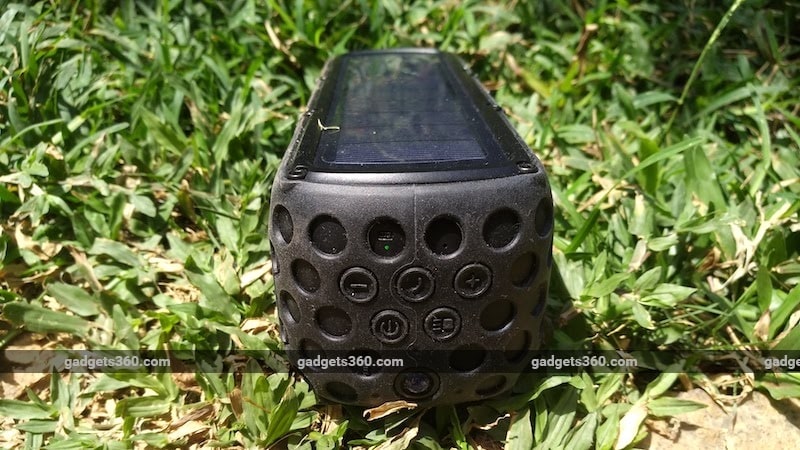 The Zoook ZB Solar Muse's controls are on one side, while the charging panel is on top.

Zoook ZB Solar Muse design and specifications
The Zoook ZB Solar Muse is a nice-looking speaker, though its design is fairly generic. It's a small black brick with rounded edges, and the exterior has a non-removable rubberised layer that forms a wide mesh that's open on the front and the back. The same design can be seen on the sides.

On the left, five buttons are integrated into the pattern. The rubber buttons aren't very visible, and aren't very tactile either. This looks nice, but from a functional perspective, it's a minor annoyance. Above the buttons are two small indicators – one for Bluetooth, which blinks until it's connected, and one for the battery, which lights up when charging either by the power cable or under sunlight.

Below the buttons, there's a small opening for a mic, and there's the flashlight. Hold the torch button to turn it on, then press it once again to start blinking or twice to change the speed. A third press turns the light off.

On the right there's just a small pull tab to hold the speaker with, though it looks flimsy. On the back there's a covered section which keeps the 3.5mm audio input and Micro-USB port proteced. Finally, the top of the speaker is the solar panel, which looks pretty much like any other solar panel you've ever seen. 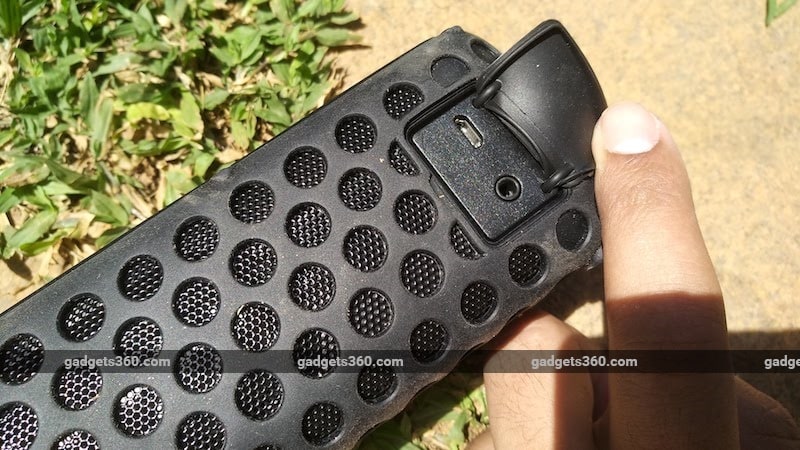 The charging port and 3.5mm jack on the back are protected by a rubber flap.

The speaker is 20.32cms long, 6.6cms tall, and 6cms deep. It weighs in at 430g, which is not too much. There are two 40mm drivers, with a frequency range of 100Hz to 18KHz. Zoook refused to disclose the exact battery capacity or the wattage that the speaker is rated at, but listening to it, it's clear that the battery (which really does last long) was the priority, not the speakers.

Zoook ZB Solar Muse performance
To test the speaker, we looked at both the effectiveness of solar charging and also the sound quality and volume that it can deliver. For the former, we kept the speaker playing inside a dark cupboard until we were finally sure that the battery had run down, and then took it out to charge. According to Zoook, ten minutes in the sun should give you 30 minutes of playback time, so we tried exactly that - charged it for ten minutes, and then put it back in the cupboard and started playing music.

The speaker actually lasted between ten and fifteen minutes across three attempts, but there could be any number of explanations for this - the sunlight might not have been bright enough that day, the volume might have been higher than what Zoook used to test the speaker, and so on. The key takeaway is that you shouldn’t expect the claimed figures under all conditions.

In actual day-to-day use, you're not likely to run out of power. The room we usually use to test speakers in has incandescent lightbulbs, and the light from them was enough to start charging the battery slowly. Fluorescent lighting on the other hand did not charge the speaker, so a tubelight won't get the job done. You either need old-fashioned bulbs, or leave the speaker where there’s sunlight.

Apart from the controls, the mic and flashlight are also on the side.

What about the sound? We tested the speaker with an aux cable plugged in and via Bluetooth. The cable is automatically selected as the primary source when you plug it in. We first tested the speaker using a MacBook Air, and then also paired it with a Xiaomi Mi Max 2 for Bluetooth playback. We used some locally stored FLAC files, and also tried streaming music from YouTube and Saavn.

The speaker isn't very loud - it had trouble filling up a 300 square foot room, and when you take it outdoors the sound feels faint even at maximum volume. Solar charging might make it ideal for picnics, since you don't have to worry about the battery running down, but its impact might be less than you'd hope for.

To make matters worse, the sound is pretty compressed. Twin drivers placed close to each other do not contribute to a good stereo effect, no matter what you're listening to. The variety of sources we used didn't really sound different - the quality when streaming something off YouTube was more or less the same as when we played a FLAC file from our hard drive, and Bluetooth made little difference compared to a wired connection.

In our test, we listened to vocal-heavy tracks from the Hamilton and Hotline Miami soundtracks. Then, we streamed a large number of random pop songs from our phone. Sadly, it also didn’t really matter what we were playing - the sound was just about okay across the board. No parts of the tracks - be it the vocals, the drums, or other instruments - really stood out. At Rs. 5,000, the sound isn't what you'd hope for, so the question is whether the solar charging feature makes this speaker worth buying for you.

The mic means it can be used as a speakerphone, and we tried making a few calls with the unit, but people complained that our voice sounded very faint and muffled. After a few attempts, we gave up on this feature entirely. 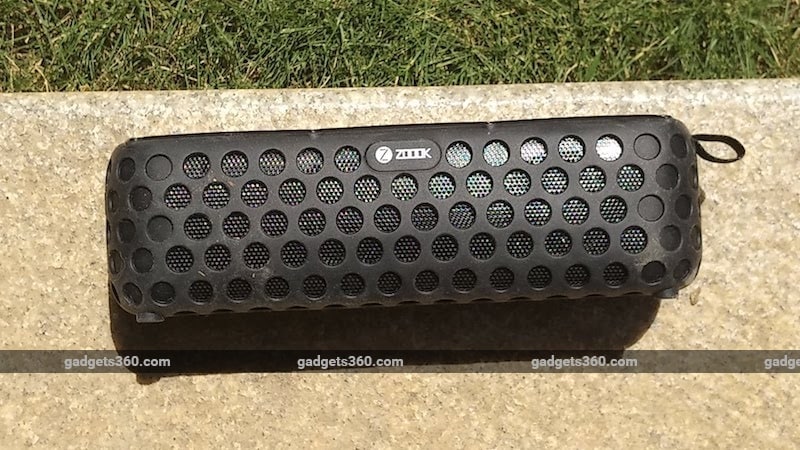 The entire speaker is covered in a rubber casing to make it tougher.

Verdict
The Zoook ZB Solar Muse is not cheap, but it sounds like a speaker that should cost about Rs. 1,500. Brands like Logitech, Philips, JBL, and Creative all have models that sound much better for roughly the same price, so if it's sound quality that you care about most, give the Zoook ZB Solar Muse a miss.

On the other hand, if you're tired of always needing to charge your speaker, then this could be the right choice for you. We used our unit for almost two weeks, including several stretches lasting multiple hours for a few days in a row, without plugging it in even once – ambient light kept us going the whole while.

Further reading: Zoook, Zoook ZB Solar Muse, bluetooth speakers, Solar power, Solar powered speaker
Gopal Sathe Email Gopal Gopal Sathe is the Editor of Gadgets 360. He has covered technology for 15 years. He has written about data use and privacy, and its use in politics. He has also written extensively about the latest devices, video games, and startups in India. Write to gopal@ndtv.com or get in touch on Twitter through his handle @gopalsathe with tips. More
Battlefield V Loot Boxes Will Not Be Pay-to-Win, 'Cosmetic Only': Report
Almost No One Is Making a Living on YouTube

product The Zoook ZB Solar Muse is a solar-powered speaker that keeps going, but does it sound any good? Read our review to find out. 3 out of 5 stars