Home theatre projectors give you huge screens and are much better suited to some usage scenarios than even the best TVs, but they can be bulky and difficult to operate. You also need to have a projector screen, speakers, and dark room for best results. Portable projectors, on the other hand, provide a lot of the functionality of home theatre projectors, with the added benefit of portability. This viewing option is underrated and often even forgotten.

Today we're reviewing one such portable projector. The ViewSonic M1 is currently priced at Rs. 49,500 (MRP), although you can purchase it online for around Rs. 37,500. For the price, you get a feature-filled device that can project quickly and easily from multiple sources. But how does it perform in practice? We find out in our review. 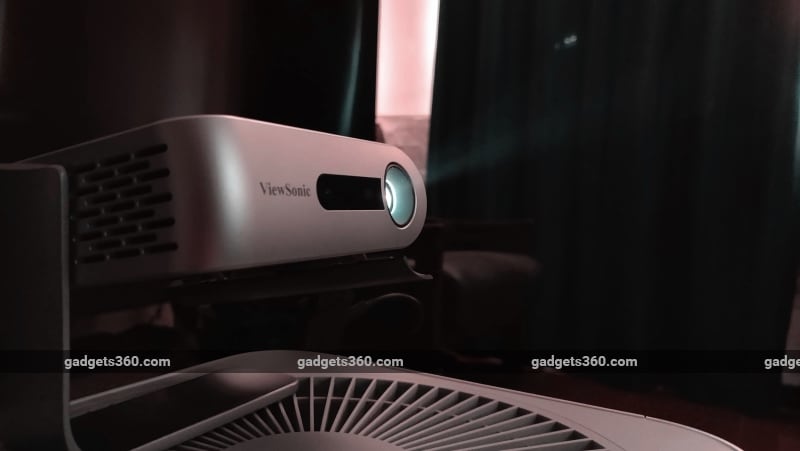 From the time we first unboxed the ViewSonic M1, we were impressed with how this device looks and feels. The projector is compact and fits easily in one hand, so it's small and light enough to carry around in a backpack. Perhaps the most interesting design aspect here is the swivel stand, which serves as a lens cap when the projector isn't in use. The stand swivels 360 degrees, and can be used to conveniently set the angle of the projection as well.

The buttons are at the back of the projector, while the ports are under a flap on the side. The Harman Kardon-tuned speakers (two 3W drivers) are at the top, while the bottom features a tripod mount for added options in positioning. Assuming you place the projector on a table-top, the stand will be stable enough to position the ViewSonic M1 appropriately.

The buttons at the back of the projector control power, navigation, and volume, but aren't quite as intuitive or responsive as we'd have liked. We often accidentally triggered the power button, switching on the projector at odd times without intending to do so. Furthermore, navigation can be rather difficult as well. ViewSonic does bundle a remote with the projector, and this makes navigation and control considerably easier.

Also included in the sales package are a USB Type-C cable, an HDMI cable, a power brick and cable for charging, and a cloth pouch to store the projector and carry it around in. The ViewSonic M1 supports input through USB Type-C, MicroSD cards, HDMI, and USB Type-A (for portable storage). You can also connect headphones or external speakers through the 3.5mm output. Charging is through a dedicated 19V DC input, and we were able to fully charge the projector in a little over two hours. 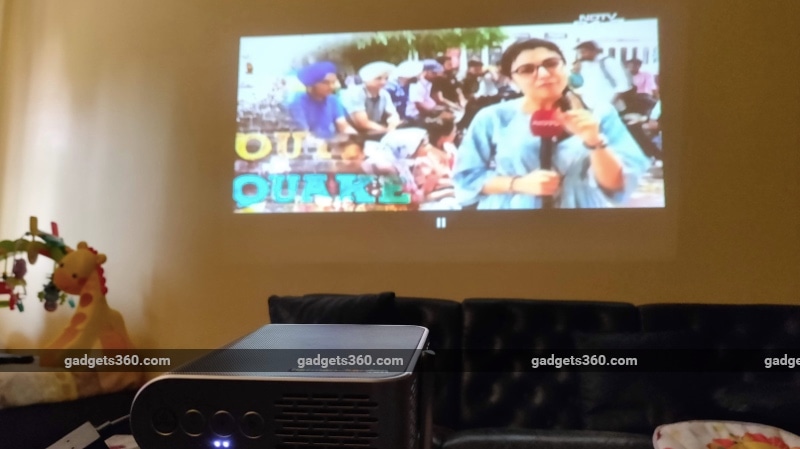 On a full charge, the projector ran for 3 hours and 15 minutes, with the brightness turned up to the maximum level. It's possible to get a bit more out of this projector with its brightness reduced, although this will affect projection quality a fair bit.

The ViewSonic M1 has a specifications sheet that is good in some ways, and not so great in others. It's a DLP LED projector with a resolution of 854x480 pixels, which is rather low for a device that is priced at nearly Rs. 50,000. Although it's a workable resolution for portable projection, we feel that HD 720p should be the bare minimum resolution to strive for on a product such as this. The device is listed to support up to full-HD resolution content, which is downscaled in projection.

Apart from this, the Viewsonic M1 can project a screen size of up to 100 inches in either the 4:3 or 16:9 aspect ratios, with a minimum throw distance of 1m. However, the lens's zoom level is fixed , so the screen size depends entirely on how far away from the wall you position the projector. A small dial near the lens lets you adjust the focus.

The projector has auto keystone correction, which is rather helpful and works well to straighten out the projected image if you can't place it exactly perpendicular to a wall. It took about a second to correct the image, and always did it properly in our experience.

Finally, the ViewSonic M1 has a claimed lamp life of 30,000 hours, a brightness of 250 lumens, 16GB of internal storage, and the ability to play files through its in-built media player. Most popular video file formats, including AVI and MP4, are supported.

While there's a lot to praise the ViewSonic M1 for when it comes to design, connectivity and ease of use, the most important thing about it is how it performs. For our review, we played content from a USB hard drive, and also connected an Amazon Fire TV Stick 4K via HDMI to stream video content. We found that the best results in terms of performance came when using the Fire TV Stick 4K.

Starting with content off the hard drive, we watched a couple of movies and some episodes of a few TV shows. The resolutions of our video files varied from standard definition to full-HD, and naturally the best results came from the full-HD content. The low resolution of the ViewSonic M1 means that the bigger the projection size, the more likely you are to see pixelation in the projected image, even if you're sitting a fair distance away. SD content showed the resolution issues rather clearly, while some of the full-HD content improved the picture slightly.

However, no matter what you're watching, with a projection size of anything over 60 inches, you'll see considerable grain in the picture because of the obvious drop in density. Keeping the projection size down to below 60 inches resulted in the best picture quality for us.

We found that any blank wall of a light colour works for the ViewSonic M1; even though the wall we projected onto wasn't pure white, it didn't affect colour on the projection. Also, while a darkened room is ideal, a bit of light sneaking in won't heavily affect the quality of the image, assuming the projection isn't too large.

With the Amazon Fire TV Stick 4K connected to the ViewSonic M1, we immediately saw an improvement in the picture quality. When streaming Brooklyn Nine-Nine and The Grand Tour, picture quality was cleaner, with better colours and motion. However, an important weakness of the projector is still its low resolution and the higher quality source material can't make up for this.

While some amount of grain is to be expected from a portable projector, the price of the ViewSonic M1 makes the grainy picture less forgivable. However, there are some use cases where the low resolution might not make too much of a difference to the overall experience. When keeping the projection size down to around 50 inches for purposes such as giving presentations or gaming on the go, or just having a portable big screen for travel, you can get decent picture quality from the M1.

Finally, audio performance is impressive for the size of the ViewSonic M1 projector, thanks to the Harman Kardon-tuned speakers. If you're close to the projector while you use it (sitting right behind or beside it, for example), you'll be happy with the sound quality. However, if you plan to watch movies with a group or sit away from the device, it will help to attach a louder wired external speaker. Sound tuning is acceptable, and is largely geared for movie audio. 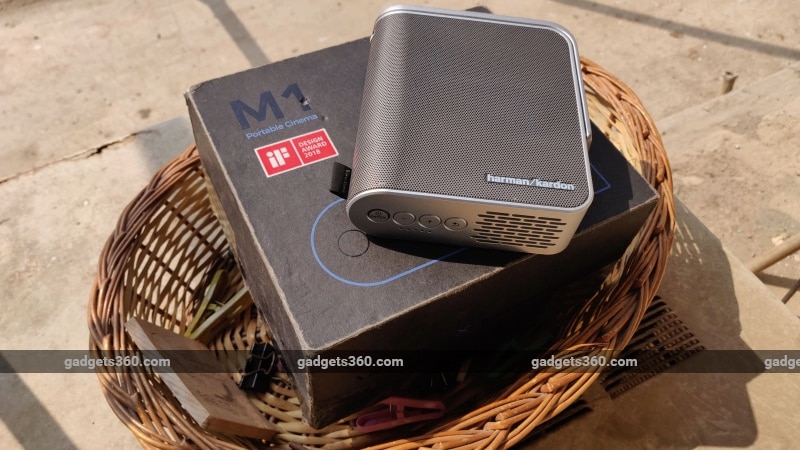 Verdict
The ViewSonic M1 portable projector has a lot of good qualities, including great design, a convenient size, and decent audio for a portable projector. While battery life isn't excellent, you do have a fair amount of flexibility from this projector in terms of how you can use it and how easy it is to use. You don't even need a very dark room. You can also attach external storage or use the device's internal storage for full portability and wireless control, which is the M1's best quality.

However, the lower-than-HD resolution and fixed zoom lens are big flaws for the ViewSonic M1. Using distance to set projection size might sound convenient, but is easier said than done when space is an issue. No matter how good the content, a big projection size will lead to a picture that is short on sharpness and detail.

Also, while this segment doesn't have too many notable options and this product does sit in a bit of a niche, there's no escaping the price. At Rs. 49,500, the ViewSonic M1 is perhaps a bit too expensive for what it does, but if this is what you need and you can overlook the grainy picture quality, it might be worth it for you.