One of the significant changes in TV in recent years is that not all of it is on TV anymore. As we noted earlier, cord cutting is feasible in India now, and as Internet connections improve, this is going to become even more of a reality. That means watching some shows on broadcast TV, while others are streaming over Netflix, Hotstar, or Amazon Prime Video.

If you have a Smart TV - which is to say most TVs released in the last couple of years - then you can press a button on your remote and switch over to the TV's interface, and load up your favourite apps. Otherwise, you'll need to buy a Chromecast, or an Amazon Fire TV Stick, or some other similar smart box to add this functionality to your TV.

That means an extra set of wires in your house, and regularly switching between HDMI sources, which can be inconvenient. So it's nice that our D2H providers are getting smarter, and adding some brains to the set-top boxes as well.

Earlier this year, Airtel launched a hybrid set-top box that supports TV channels, along with apps and games, one that we reviewed recently. Before that, Videocon d2h launched a set-top box with Internet browsing, and now it has the HD smart box, which also features apps and games, so you can watch movies via YouTube, EROS Now, and more. You can also connect your social media accounts or mirror videos from your phone. Gadgets 360 has been using one for the last 10 days, and in general, the company has done a good job for a hybrid device, though it's not quite ready to replace a standalone smart box just yet. Read on for a more detailed look at the device. 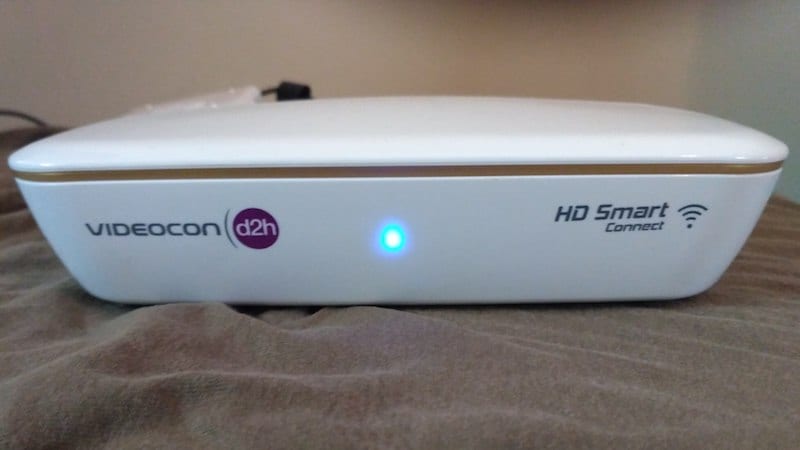 In terms of design, there's not much you can compare the Videocon D2H HD Smart Connect box when you're looking at other DTH set top boxes. Most are boxy and bulky, and this is no exception, though a slight inward slope coupled with a bright white look makes it more cheerful looking than most other similar boxes. That being said, the white look is going to pick up dust more easily and shows marks far more clearly.

The remote is a fairly standard remote as well, with a button on the top for Web-apps, alongside standards like menu and VoD. Like the set-top box, the remote is also white, which at least helps it stand out from the other remotes we've got, which are all black.

There are no ports on the front, just the Videocon logo and a light. To the right, there are a couple of vents, and on the left side, there's a USB port. You can connect a pen drive to use for recording and pausing television if you like. On the back, you've got ports for the power cable, HDMI, Ethernet, video and stereo RF jacks, and the DTH coaxial cable.

The interfaces themselves are for the most part now fairly standard. Tapping the Mosaic button on the remote, for instance, pulls up a grid showing the different genres of channels - scroll over to HD channels and a fresh grid shows the channels themselves. Tapping the guide button, on the other hand, brings up the EPG as an overlay while your show continues in the background.

Pressing the Web-apps button, however, requires a little setup. You need to ensure that your number is registered with Videocon, and then you have to set up the Internet connection. If you're connected via Ethernet that's easy enough - just press the menu button, go into system settings, and in network preferences choose Ethernet. On the other hand, if you're using Wi-Fi, you'll have to go into Wi-Fi setup, scan for and then choose your network, and then type in the password. 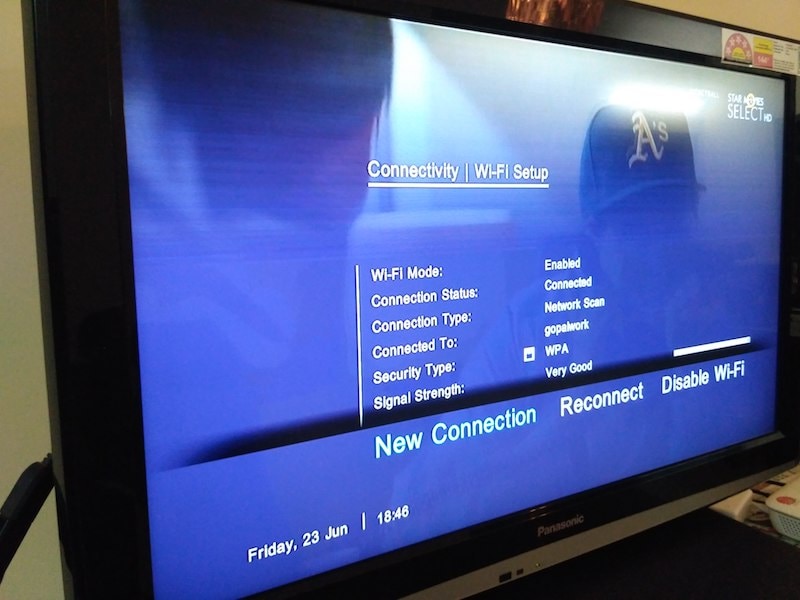 As you'd expect, text entry is incredibly awkward. Each key on the remote starts with the number, then each character, cycling through uppercase and then lowercase, so if you keep pressing 2, for example, then you'll cycle through 2AaBbCc. Good luck if you need to type 's' or 'z'.

A much better option is to use your phone as a keyboard. To do this, you need the (Android only) d2h Smart Remote App. The app lets you use your smartphone as a remote, but more importantly, when there's data entry needed on the set-top box, you can use a virtual keyboard on the phone. This is not lag-free, but it's good enough to get the job done and significantly better than using the remote.

Once you've set everything up, the actual "smart" functionality is pretty straightforward. Tap the Web-apps button and you're taken to an interface where you are asked what your interests are, and then a selection of movies (via YouTube) is shown.

Press the Okay button to start viewing, and the 'X' button to exit at any point. Otherwise, you can browse and load other apps, including NDTV, and there's also the option of casting video from your phone. You can add apps such as Sony LIV, EROS Now, and TED Talks. We already know that Netflix is in the pipeline, and Videocon confirmed that Hotstar, Amazon Prime Video, and Voot are all coming soon as well. 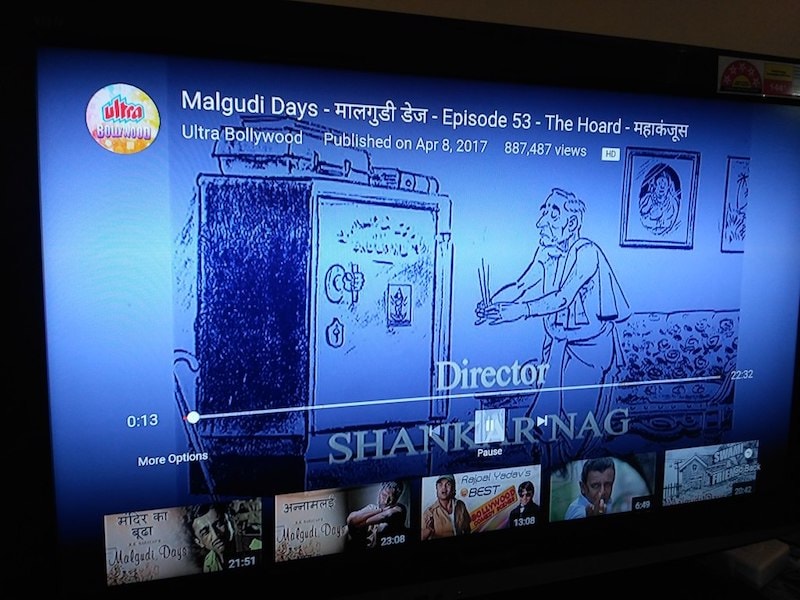 Other apps that are present on the set top box from the start include Twitter and Facebook; so you can browse your social networks at the press of a button. Once again, signing-in is a pain, and posting any updates via the remote is also not really an option. This means that the social apps aren't really worth using on the TV, but your mileage may vary on that front.

What is definitely clear is that until the big streaming apps are available on this platform, you're going to need to use another device to get your viewing fix. That defeats the purpose of a smart box, but it's a software update that will come over the air, so the additional streaming channels can be added without any real difficulty.

Beyond that, the mobile cast feature works simply enough, letting you cast videos, music, and pictures from your phone to the screen. The cast function on our Xiaomi Redmi 3S Prime worked for this without any issue.

Other standard features like recording TV to a pen-drive, pausing live TV, and so on worked as expected. While these are still not standard features across all set-top boxes, they've become fairly widespread and suffice to say that they work smoothly and without any hiccups.

In terms of performance, the Videocon D2H HD Smart Connect delivers on the TV fronts pretty well. We've tried out a few different DTH providers, and all of them have issues in terms of the UI design, and that's true here as well, but overall, it's definitely usable and intuitive for the most part. 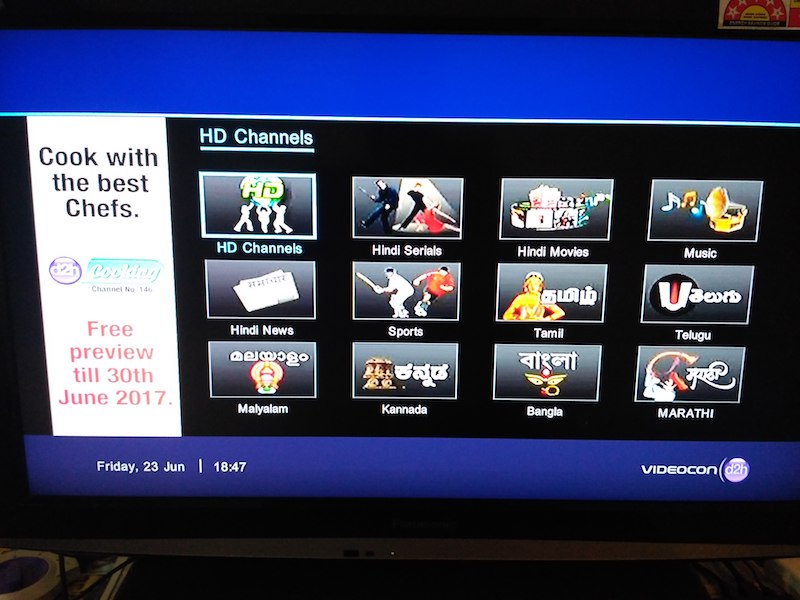 On the "smart" front, there's a fair bit of setup that needs to be done before you are actually using the smart features. The process simply doesn't feel as smooth as setting up an Amazon Fire TV Stick, or an Apple TV; but then, an Apple TV is significantly more expensive, while even a Fire TV Stick is an additional cost you'll have to bear on top of the price of your set-top box.

Launching a video takes a little time - though this is partly going to be affected by your connection speeds. We had some buffering with a very reliable 20Mbps connection but once the video was playing, things were pretty smooth.

Mirroring also worked reasonably well, though again, there was a little bit of lag. This isn't really irksome when you're watching videos though - after the initial delay, things proceed smoothly enough so it doesn't matter.

Verdict
The Videocon d2h HD Smart Connect box is definitely a great idea. We're all tired of a multitude of boxes strewn under our televisions, juggling multiple remotes, and managing dozens of cables. It's a mess, and it's about time someone tried to simplify things. You'll also save some money by going this route, as you won't have to spend on a Chromecast or a Fire TV Stick.

The actual implementation is not bad, but it could be smoother, and the interface could be a little more intuitive. Given the price, it's not all bad, but the company could have done things like adding a remote with a built-in voice-controller or a proper keyboard on the back, to make it more accessible without a phone. Still, these are relatively minor quibbles.

However, until the additional video platforms such as Netflix, Hotstar, and Prime Video are brought on board, there's no denying that the D2H HD Smart Connect box feels a little hamstrung, though Videocon says they're coming in the next month or so.

Current Videocon d2h users can upgrade for Rs. 2,490, but won't get the month's channel pack.