2018 is the year when India is finally taking 4K seriously. The competition's hot in this segment, and all major players, old and new, are putting interesting products on the table. It’s truly a great time to be a buyer in this segment. That brings us to Truvison, a Europe-based consumer electronics company that’s relatively new in India, and has brought its new 4K TV range to the market. The model we are testing today - the TX55101, doesn’t have HDR support but does have an interesting list of features. How well does it actually perform? This is what we found out.

The Truvison TX55101 has a metallic front bezel that’s evenly sized on all four sides. When you first take this TV out of its box, you’ll have to carefully peel off a plastic protective layer covering the screen before you start using it. We understand that this is meant to protect the screen, but removing it is tricky, and you could end up leaving some hard-to-remove plastic strands tucked inside the bezel.

The metallic stands have a standard two-spoke design, and the same finish as the bezel, making them match perfectly. Overall the design is simple, yet elegant. It will look good in most living rooms. Truvison also bundles a wall mount in the box in case that’s what you prefer. 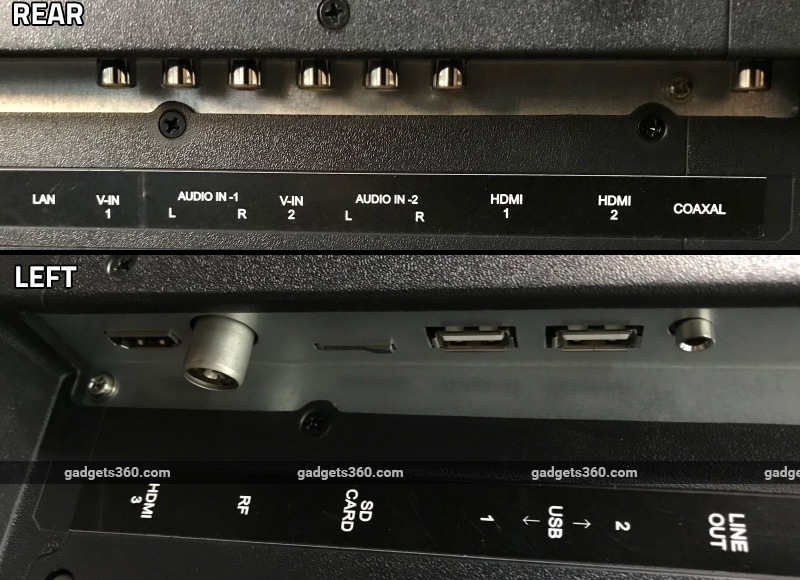 The TV has three HDMI ports; two on the back and one on the side. There are two USB ports, both USB 2.0, which is a shame considering that you will need USB 3.0 if you want to play 4K videos smoothly from external drives - but more on that in a bit. The TV supports Wi-Fi connectivity, and there’s also an Ethernet port on the back. For audio output there’s a line-out port on the side and a coaxial port on the back of the TV; the latter for surround sound. Finally, there are two sets of composite inputs on the back, and the RF Antenna input along with an SD card slot on the side.

The Truvison TX55101 comes with two remotes - one is a standard IR remote that everyone’s familiar with, and the other is a Bluetooth remote with air mouse functionality and a keyboard on the back. The IR remote is quite straightforward and functional, with shortcuts for the Netflix, YouTube, and NexGTV apps, which come pre-installed on the TV. 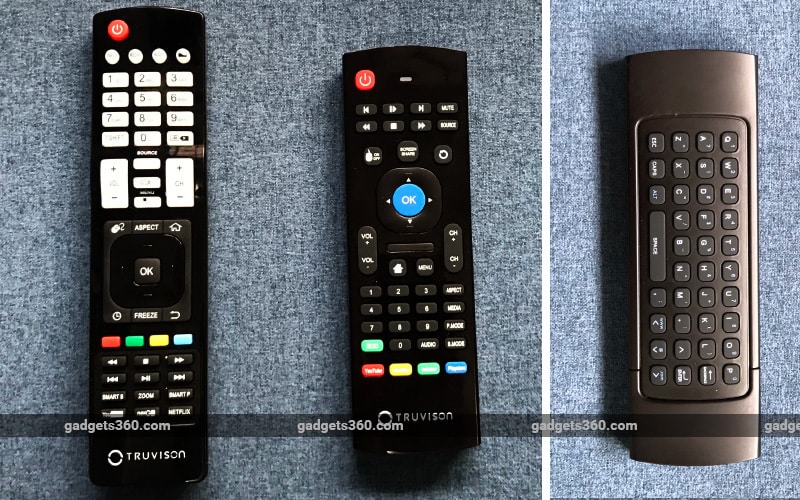 The Bluetooth remote on the other hand is not the typical second remote with a minimalistic design that we’ve seen from other manufacturers. It has all the main controls of the IR remote, plus shortcut buttons for YouTube, Netflix, Hotstar, and the Google Play Store. It even uses IR to send these button presses to the TV. On the back of the remote is a full QWERTY keypad for typing, and that’s what is communicated via Bluetooth - along with the air mouse functionality. The thing is, the remote requires a Bluetooth receiver which occupies one of the two USB ports on the TV. After using it for a while, we’d say it is definitely better optimised for a point-and-click interface, which means sacrificing a USB port.

The Bluetooth remote leaves the standalone IR remote redundant. To make matters worse, the IR receiver has a very narrow sensor field, which means you have to explicitly point the remote at the bottom right of the TV for it to register your input.

The Truvison TX55101 runs a customised version of Android 4.4.4 (KitKat). Selling a product with such an old version of Android is problematic to begin with, and to make things worse, it runs only the mobile versions of all Android apps. This means that Netflix, Hotstar, and Amazon Prime Video (available on the Play Store), run as they would on an Android smartphone, instead of using their TV-optimised interfaces. You have to keep switching to the air mouse to operate these apps, and it can end up being an exercise in frustration. Also, it’s important to note that none of the apps recognise the panel’s 4K resolution, which means that all videos from them will play capped at full-HD.

The TV lets you download additional apps from the Google Play Store, but there’s a caveat here as well. Not a lot of apps support Android KitKat anymore. Some apps like YouTube won’t even update to their latest versions for this exact reason. The TV has a total of 8GB of storage, of which only around 4GB can actually be used. It’s not much so you ‘ll have to be picky about the number of apps you install. 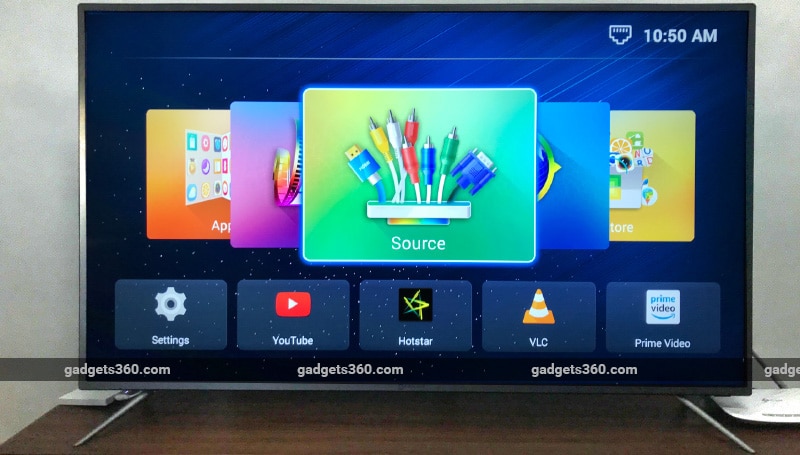 Needless to say, the “smart” TV functionality is quite a letdown. You’d be better off using external players such as a PlayStation 4 Pro, an Apple TV, or any other 4K source to make the most of this TV.

As we have stated, this is a 4K TV without HDR support, which seems like quite a miss for a TV at this price point. It does have a peak brightness of a little over 300 nits, which is good enough for a clean standard dynamic range (SDR) image. The panel itself is a LED-edge-lit LCD, and the company claims a contrast ratio of 2,000,000:1.

Software issues aside, running 4K media on the panel gave us some pretty interesting results. The external devices that we used for testing - a PlayStation 4 Pro and an Apple TV 4K - recognised the display as 4K immediately. We first tried out 4K shows such as The Punisher, Stranger Things, and Black Mirror, all of which looked pretty good overall.

There was no noticeable ghosting in bright scenes, and no light leaks in dark ones. In fact, the picture was clearer in shows with film grain effect, such as The Punisher. This show does not look good on a lot of 4K panels - even ones with HDR. Here, the TV did a pretty good job of noise reduction (by default, no additional settings were required), resulting in a cleaner picture, with the film grain effect playing a more passive role.

The colours on the TV are also well calibrated, and we didn’t notice any particular colour overpowering the others. Black levels were well managed well, as far as edge-lit panels go. You don’t get the deepest of blacks, but as long as you’re not watching a very dark film in a dark room, you shouldn’t have much to complain about. The black levels also help with contrast, which makes images pop well. 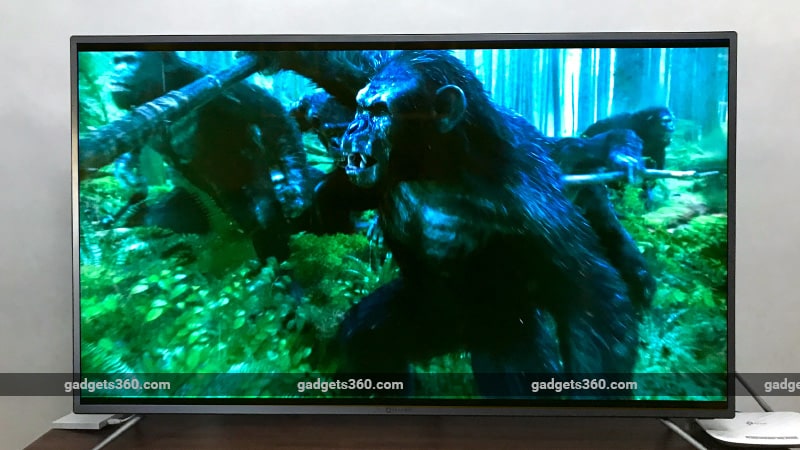 In games, the TV fared just as well when it came to visual quality. We did however notice very slight input lag in twitch-style action games such as Injustice 2, which can be because of the TV’s high response time of 8ms. It’s not that big of a deal for most games, but could be a bit of an issue if you’re planning on playing competitive online titles. Upscaling is not a strong point for the Truvison TX55101, and watching 1080p videos showed an instant difference in quality. As you go lower in resolution, the image quality keeps getting worse.

Moreover, we noticed that when we sat close to the TV - say only about 4-5 feet away - there was noticeable horizontal interlacing across the screen. This was evident in the Smart OS interface as well as all the media, apps, and games we ran on this TV. Once we saw it, we couldn’t unsee it. If you have an eye for these things as we do, the interlacing could become a problem to the point that you would be looking for it even when it’s not so evident. 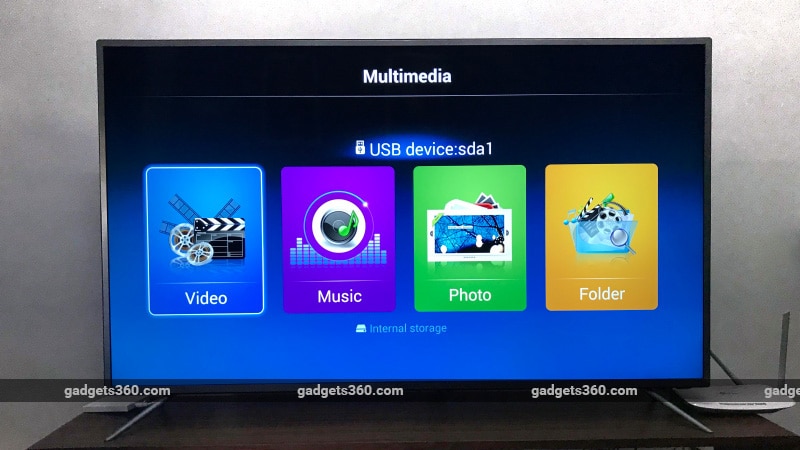 We were able to play full-HD videos from an external drive using the TV’s in-built media player, but we had trouble across the board when trying to play 4K files. The videos would either glitch out completely or just play at an unwatchably slow framerate. Even installing VLC player on the TV didn’t help.

In terms of audio, this TV was quite adequate if all you’re concerned about is loud, room-filling sound. The two 10W speakers do offer decent sound, but it isn’t exactly an aurally immersive experience. For more refined audio quality, you should put the TV’s digital audio output to good use, since Dolby Digital audio is supported.

Verdict
Despite not being HDR-capable, the panel on the Truvison TX55101 was initially quite impressive and promising. 4K performance across movies, TV shows and games was pretty good. However, the same can’t be said about the rest. The outdated OS, unimpressive upscaling, and the interlacing issue are three strikes against a TV that costs Rs. 68,990, which is really a shame. Sure, other options at this price level might not be perfect either, but their flaws aren’t deal-breakers.