Portable projectors are not a new concept, but there's just something appealing enough about them that gets everyone's attention. While home projectors need an elaborate setup to work well, having a portable projector seems so much more practical. The idea of having a gadget that can give you a big-screen experience for your presentations, movies, TV shows, and even mobile games whenever you want, is quite appealing.

Sony's MP-CD1 mobile projector is just that. It makes the promise of giving you a giant screen wherever you go, whether you want to use it for business or entertainment. The downside is that at its price of Rs. 29,990, it's one of the premium-priced offerings in the market today. We explore whether the quality on offer is enough to do justice to the price and the Sony brand.

The Sony MP-CD1 is built really well, and it projects that (no pun intended) at first look. The matte black finish of the projector's body feels great. The build quality is excellent, with everything packed into a 16x83x150mm body that weighs just 280g. The minimalism of this device makes it look quite premium.

There's just one button on the device, and it's for turning it on and off. There's no option to zoom so you will have to distance the projector from the screen or wall according to the picture size you want. There is however, a small slider to manually set the focus. We found this quite limiting initially as the slightest movement of this slider could drastically change the focus of the image. That said, it did get easier to use once we got the hang of its sensitivity, and thankfully, it was firm enough to stay in place once set.

The Sony MP-CD1 uses a USB Type-C port for charging. There's a USB Type-A port right next to it, but it's only meant for power output. There's also an HDMI 1.4b port for source input, and it supports the MHL standard so you can tether a compatible mobile phone to the projector for screen mirroring. Finally there's a 3.5mm audio output. Sony says that the unit has a 1W speaker built in on its spec sheet, but we didn't hear any audio from the device in any of our tests. Output from the headphone jack worked fine.

We used the USB Type-A port to power an Amazon Fire Stick and a Chromecast during our tests, and found that the MP-CD1 was capable of powering both devices well enough for smooth performance. Of course, this would have an impact on the projector's battery life.

The MP-CD1 has a 5,000mAh battery, which is quite generous. If you don't need all that power for the projector, you can even use the MP-CD1 as a portable power bank to charge your phone. It's not something you would expect from a projector, but it's a much appreciated feature nonetheless.

There's a lot you get in the box itself including a sleek case to carry the projector around in. Sony has generously provided all the cables you'll need including HDMI, USB Type-C, and also a Micro-USB to USB Type-C cable.

The unit itself has no kickstand, which seems like a big miss. Though it can be placed flat on a table for projection, you will get an image that has its bottom at around the table's height. This means that you would need to use an object like a book to tilt the projector upwards if your screen is higher, which is a common scenario. It does however have a standard tripod mount at the bottom, letting you use any camera tripod including miniature ones. This doesn't make up for the lack of a kickstand, but is a neat feature to have anyway. 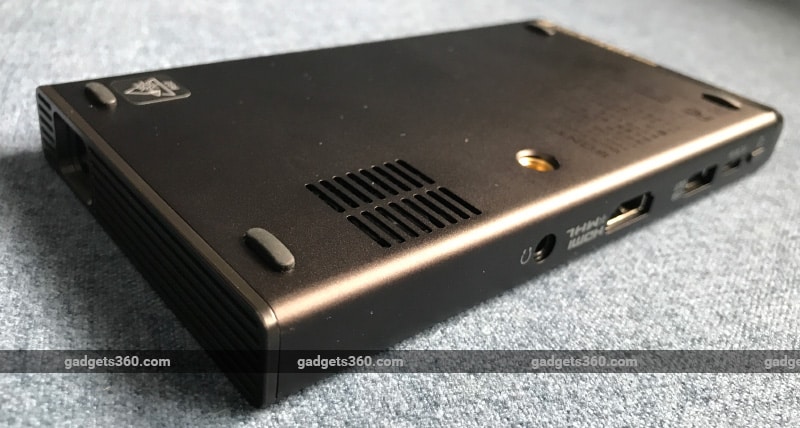 The Sony MP-CD1 uses DLP (Digital Light Processing), projection technology and supports a resolution of 854x480 pixels. This isn't very impressive, but serves the purpose of a compact projector. Sony claims that you can project a screen of up to 120 inches, which seems excessive for that resolution. It boasts 105 ANSI lumens of peak brightness, which is impressive for a portable projector. It does offer automatic keystone correction, which is a required feature considering the lack of physical control options on the projector itself.

The MP-CD1 has a tiny fan at the bottom for pushing out hot air. Sony claims that the unit's standard operating temperature maxes out at 35 degrees Celsius, which seems realistic as it never felt too hot during operation.

The lack of a kickstand and internal speaker seem like major shortcomings for a portable projector, but they can be compensated for with simple accessories as long as the projector's performance is up to the mark.

Setting up the projector shouldn't require much effort, since it's all plug and play. However, there are some factors that work against a lightweight projector, such as the weight of a cable, or other external factors that could move it from its position. The tripod mount really came in handy, as we could stabilise the unit quite well using a heavy tripod during testing. Logically, you will not be carrying a sturdy tripod with you everywhere for the sake of your projector, but you will be able to get similar level of stability with a small tabletop tripod as well.

The projector lives up to the 5-second boot time that Sony claims. Without waiting, you're ready to start projecting without any “Warming Lamp” message on screen. We connected the projector to a MacBook Air for all quality tests. 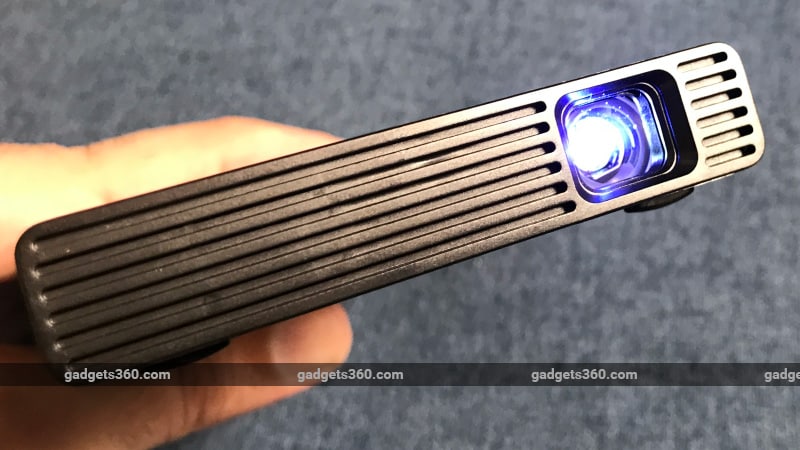 The first thing we noticed was the MP-CD1's black levels. Light leakage and bright blacks are the bane of low-end projectors, and here we expected this to be quite exaggerated since we used white walls instead of an actual projection screen. However, largely dark episodes of Marvel's Jessica Jones gave us a fairly robust image without any noticeable blurring during action sequences. The DLP ‘rainbow effect' wasn't an issue in the output, though you might notice it slightly when moving your eyes towards another object in the room. This was perfectly acceptable since it didn't interfere with our viewing experience.

We played some brighter videos as well, such as evenly lit sitcom episodes, and the image quality was quite good. We did notice that colours don't pop as well as they would on a TV screen or a home projector, but for light entertainment this was pretty good.

The MP-CD1's low resolution of 854x480 pixels isn't an issue as long as you keep the projection size below 65-70 inches (diagonally), which you can achieve by placing the projector at a distance of around five feet from the wall you're projecting onto. You start seeing individual pixels after that, and once we went up to 100 inches, the projector just was not powerful enough to produce a crisp image.

We opened a number of websites and text files to check the clarity and readability of text, and we found the MP-CD1 quite usable. There was noticeable dithering that occurred once we projected beyond 50 inches, but that was mainly with smaller text. Readability would also depend on how well the room you're using is lit. Our PC application tests were conducted in a moderately lit room.

Large images and PowerPoint presentations don't present the same limitations as fine text, and the output quality was similar to what we experienced in our video playback tests. This portable projector definitely would not be a good replacement for a TV screen or monitor, but if you need to make presentations on the go (and if you want to make a style statement while you're at it), the Sony MP-CD1 would do the job well.

Auto keystone correction worked very well, but it's best to stabilise the projector before turning it on, and not fiddle with it after you have your image set.

Sony claims that the MP-CD1 has a 2-hour battery life, but in our continuous video playback test the projector lasted for an impressive 3 hours and 20 minutes before running out of power. The results may vary if your content is very bright, but for someone looking at using this device for entertainment, that's impressive.

Verdict
The Sony MP-CD1 is well thought out and performs quite well for portable projector. The image output is crisp, colours are produced adequately well, and it does offer a good big-screen experience for movies and TV shows when used in complete darkness. Though this would never be a good replacement for your TV, it's great for people who travel a lot and give business presentations, as well as keeping the kids entertained on family vacations. It's fairly easy to operate with just a single power button and a focus slider. The power bank function and MHL connectivity are bonus features that we appreciate.

It does lack a kickstand and it definitely needs an external speaker (even if the one allegedly built-in ever works), which are the notable sore points. The price of Rs. 29,990 isn't exactly cheap for a portable projector either, especially for the output resolution it offers.

However, Sony has the advantage of being one of the better-known brands offering portable projectors in India, and that may offer peace of mind, which customers would look for in a device like this. If that and good looks are what matter to you, then you won't be disappointed.

product Sony’s mobile projector delivers high-quality projection on the go, but is it worth the high price? Read our Sony MP-CD1 for more. 3.5 out of 5 stars